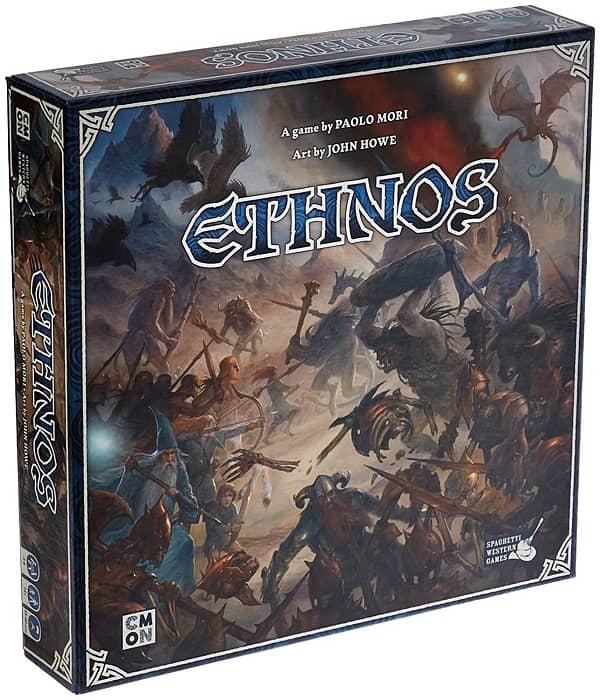 We’re definitely living in a golden age of fantasy board games.

How can you tell? Well, for one thing, a generation ago a relatively modest game such CMON’s Ethnos would have been a pocket game, like Star Fleet Battles or Valkenburg Castle, with a two-color map and paper tokens, crammed into your back pocket to play at lunch. Today it gets the deluxe treatment, with quality components, full color cards, and art by the great John Howe. Times are good for fantasy gamers, and no mistake.

Whatever form it takes, part of the charm of Ethos is its simplicity. It’s a fairly straightforward game of conquest, with a 45-60 minute play time and virtually no set up time — a far cry from the more massive games I’ve been writing about recently, like Axis & Allies and Chaos in the Old World, let me tell you. Plus, this is definitely old-school, with wizards, giants, and skeleton armies. You barely need to look at the rule book. Beer and pretzels, some glory tokens, and a lust for conquest on your lunch hour is all you need to carry you to victory. 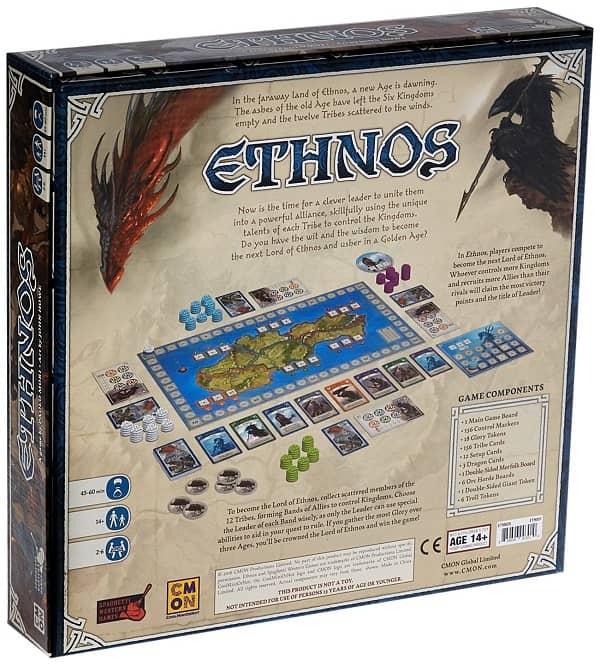 There is a backstory, in case some defect in your emotional makeup requires you to have motivation to crush your opponents. Something something lost age, scattered ancient tribes, fallen empire, etc. etc. Okay, you’re up to date. Bring on the conquest already.

Only a wise and brave leader will restore Ethnos to its former glory.
Unite the tribes, battle for glory, and rule Ethnos.

At the end of the last age, the rulers of Ethnos left the six Kingdoms without leadership, and scattered the twelve ancient tribes across the land. A once-prosperous and glorious empire was reduced to ruins. Now, it’s the dawning of a new age, and you have a chance to unite the members of the scattered tribes and take control of the Kingdoms under one rule, once and for all!

In Ethnos, you recruit different Tribe cards into your hand, form them into Bands, and play them to assert your control in one of the six Kingdoms. Over the course of three ages, you battle with opponents in a war for dominance and glory. Each Band has a Leader, and only the Leaders can tap into their tribe’s special abilities. Each of these abilities will give you a special advantage, but finding the right Leader for each assault is the key to victory. As the war rages on, more and more glory will be gained for controlling a territory. After three ages of political maneuvering and battles, peace between the six Kingdoms will be restored under a new ruler. If you are wise in your recruiting and make well-planned assaults, you may just rise to the throne.

There’s not much to the map, but I think that’s a plus. You’ve only got 40 minutes to drive those halflings into the ocean before the marketing meeting at 1:00. A bigger map would be a problem. 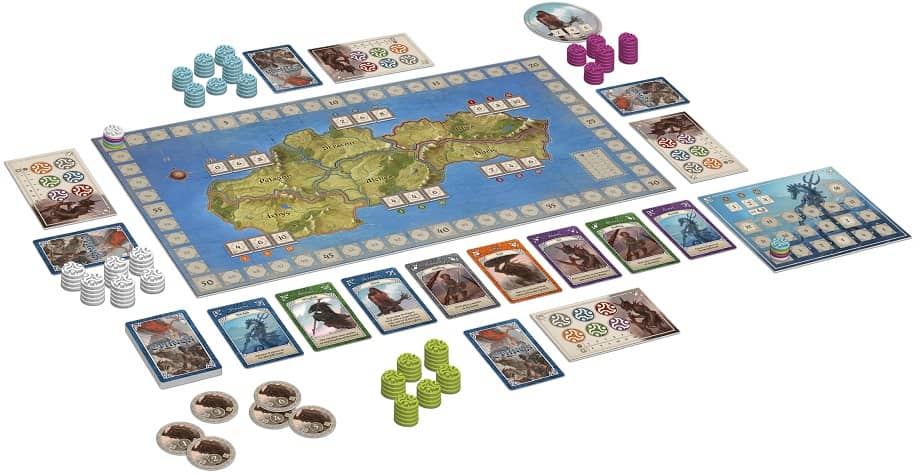 I’ve seen some grumbling online about the quality of the components, but I think it comes from people who didn’t have to manufacture replacement Ogre chits out of popsicle wrappers in 1981. The cards have actual colors. Shut the hell up already.

The game can be played with up to six players, and boy that sounds like fun. I’ll report back when I manage to coerce enough of my children for a real apocalyptic battle. I think the key is to leave it set up on the kitchen table, and allow them to be lured in by the colorful tokens. It was a solid strategy when they were five, and I bet you it’ll work today. 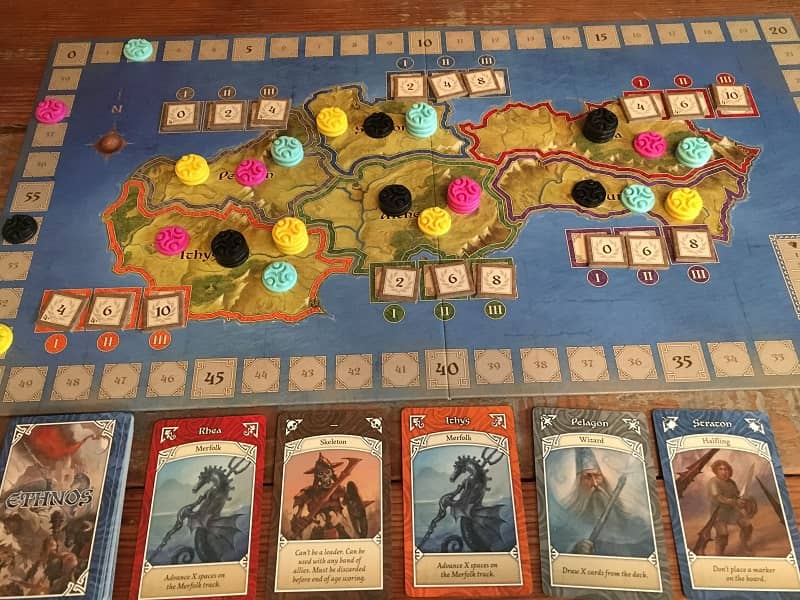 CMON has an impressive catalog of fantasy titles. Their other titles include:

Ethnos was designed by Paolo Mori and published by Spaghetti Western Games and CMON in 2017. The cover art is by John Howe. I paid $39.99 for a new copy.

Whats inspiring the board game posts? I love it.

I love John Howe’s artwork (I wonder what that cost them) But all the reviews i read made the game mechanics look a little bland. So i passed on it.

> Whats inspiring the board game posts? I love it.

I’ve been buying a lot of board games recently. Now that my kids are home for the summer, I hope to try a few more. My favorites so far have been LEGENDS OF ANDOR and CODENAMES.

I have Andor but haven’t quite gotten around to trying it yet. Ethnos looks like it might also need to come home with me someday …

Oh, the joy of those *uncut* Ogre counters and my mad scissors skillz. Ah, the collection of rhombuses and trapezoids I have! Of course, now I also have the Big Box Designer Edition occupying a corner of my living room and giving me giggles every time it catches my eye. Every. Time.

I really like Ethnos as well.
But Joe, you have to know, the theme is quite thin, its more a Eurogame. If thats OK, its a good buy. If you are looking for soemthing really Fantasy-ish, its not 🙂

Yeah, per the Shut Up & Sit Down review, the theme is pretty thin and what there is of it is very generic fantasy, but the underlying game is solid.

The other one I’m currently a fan of (and have probably mentioned elsewhere) is Tyrants of the Underdark, which is a nice combination of (light) deckbuilding and (light) area control.