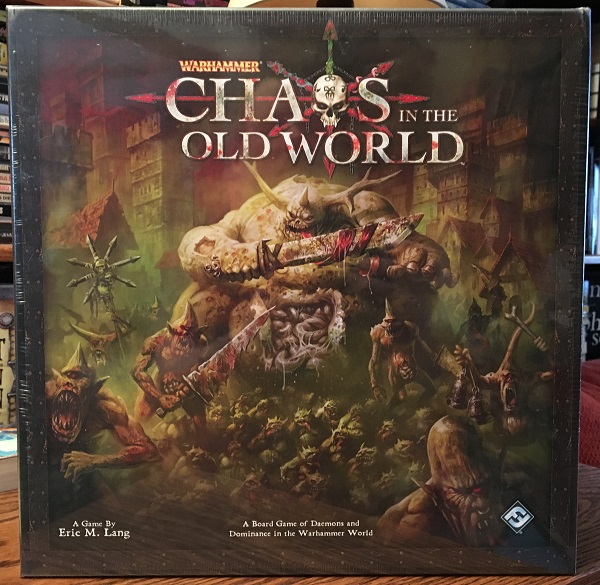 I was shopping for fantasy board games online last week, as one does, and I came across a user review of a recent title. It was glowing, and it said “This is my favorite new board game since Chaos in the Old World.”

That reminded me that I’d always intended to take a closer look at Fantasy Flight’s Chaos. It’s a Warhammer game, and I’ve been familiar with the setting for decades. But these days I spent most of my gaming dollars on the far-future version, Warhammer 40,000, and games like Warhammer 40k: Relic and the terrific Forbidden Stars. Now that Fantasy Flight has lost the Warhammer license though, Chaos in the Old World was out of print, and prices were probably starting to creep up. I made up my mind at that point to spend my weekly gaming dollars on a copy, provided I could find one at a reasonable price.

That turned out to be a lot easier said than done. The cheapest copies I could find at Amazon were $279. eBay wasn’t much better — new copies were selling for as much as $300 and up. I gritted my teeth and setting in for a long search. 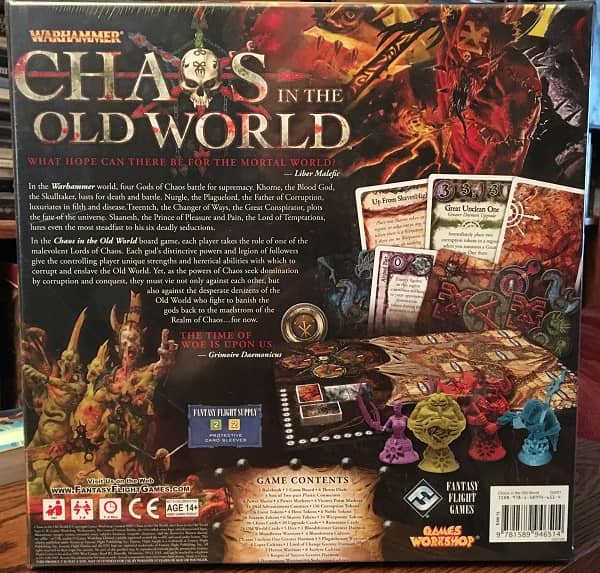 Chaos in the Old World was released by Fantasy Flight in 2009. It’s a fantasy board game based in the popular Warhammer Fantasy setting created by Games Workshop.

Warhammer began as a miniatures game in the 70s and has evolved over the years into one of the most popular franchises in fantasy — novels, computer games, board games, magazines, you name it. If you had $100,000, I doubt you could purchase all of the toys, miniatures and assorted gaming loot that’s been released for the system in the past 40 years.

Chaos in the Old World allows you to play the role of one of four Chaos gods, and be the first to corrupt the Old World. It’s a pretty dark premise, to put it mildly. But the game will give you a sense of the dark forces at play in the setting.

What hope can there be for the mortal world? — Liber Malefic

In the Warhammer world, four Gods of Chaos battle for supremacy. Khorne, the Blood God, the Skulltaker, lusts for death and battle. Nurgle, the Plaguelord, the Father of Corruption, luxuriates in filth and disease.Tzeentch, the Changer of Ways, the Great Conspirator, plots the fate of the universe. Slaanesh, the Prince of Pleasure and Pain, the Lord of Temptations, lures even the most steadfast to his six deadly seductions.

In the Chaos in the Old World board game, each player takes the role of one of the malevolent Lords of Chaos. Each god’s distinctive powers and legion of followers give the controlling player unique strengths and heretical abilities with which to corrupt and enslave the Old World. Yet, as the powers of Chaos seek domination by corruption and conquest, they must vie not only against each other, but also against the desperate denizens of the Old World who fight to banish the gods back to the maelstrom of the Realm of Chaos…for now.

The time of woe is upon us. — Grimoire Daemonicus

The game was expensive, even before it went out of print, and the major reason for that was the premium components, including high quality cards, sturdy board, and — especially — the miniatures. 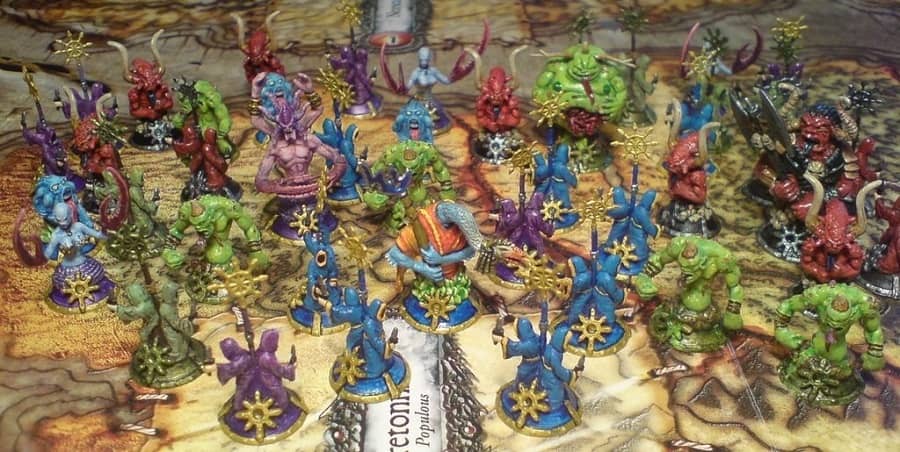 The game comes packed with all these goodies: 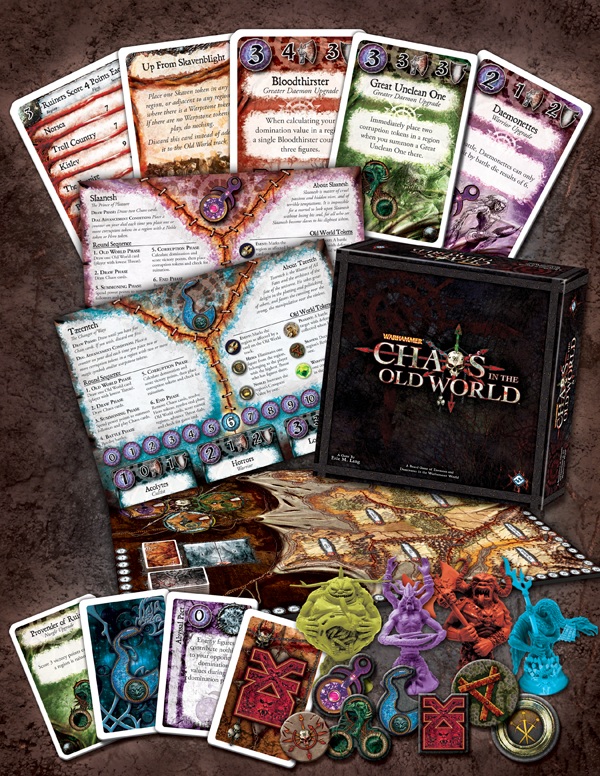 The game was designed for 3-4 players, and takes 1-2 hours (not including set up time, of course.) 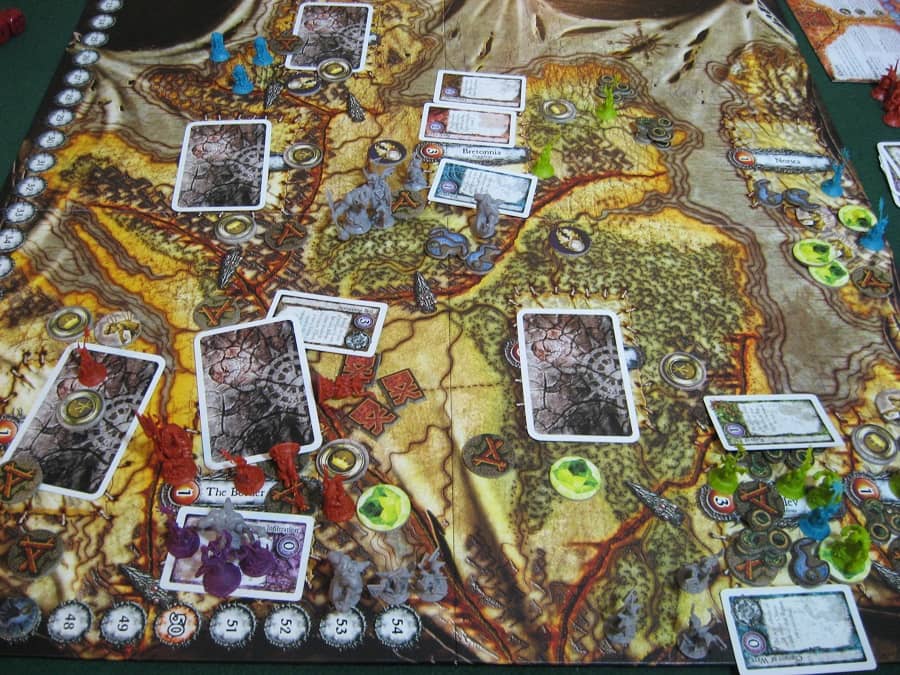 Chaos in the Old World has remained popular for years. I first saw a copy in a local gaming store here in St. Charles, Illinois nearly a decade ago, and it’s remained in print for years. Well, at least until Fantasy Flight parted ways with Games Workshop last year, which forced them to sunset their entire line of Warhammer products, including board games and their highly acclaimed Warhammer 40,000 Roleplay RPGs, like Dark Heresy and the fabulous Rogue Trader. 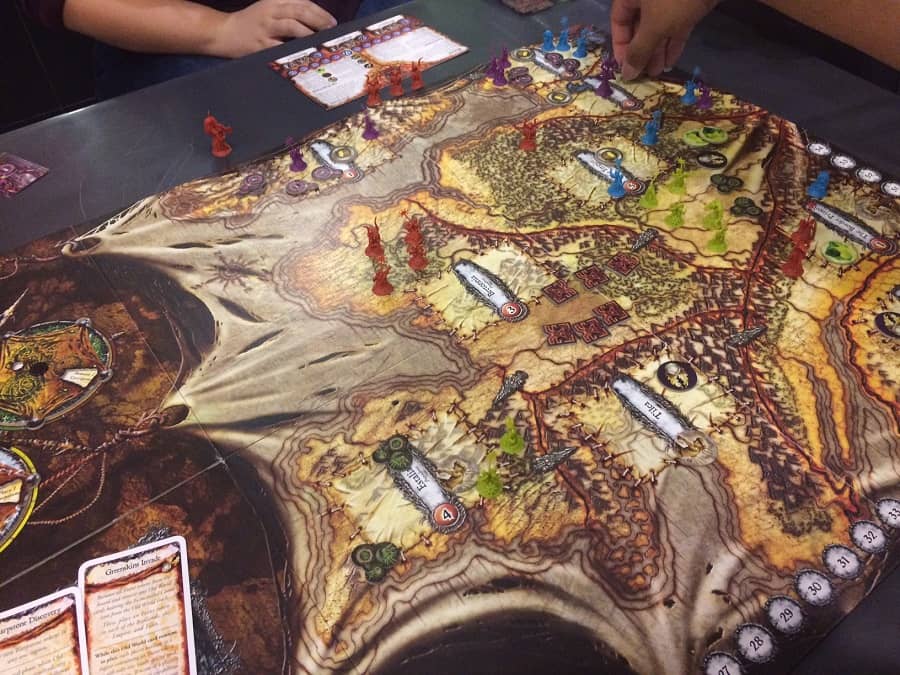 There was a single expansion for the Chaos in the Old World game, The Horned Rat (2011), which added a fifth player.

Below the Old World’s cities sprawls a vast network of tunnels, caves, and underground roads. Verminous Skaven skulk within this Under Empire, waiting for the perfect opportunity to rise from the warrens and destroy their enemies for the glory of their sinister god, the enigmatic Horned Rat. Even as the Ruinous Powers work to corrupt the Old World, the Skaven are ever scheming to further their own dark agenda.

The Horned Rat expansion for Chaos in the Old World introduces a fifth player to the race toward corruption! Armed with a legion of Skaven followers, the Horned Rat player uses numbers and subterfuge to his advantage, scoring points by spreading the Skaven’s teeming masses across the Old World. Players of the existing Ruinous Powers can meet the foul vermin head on with a host of new gameplay options, including alternate upgrade and Chaos cards. Meanwhile, veterans will find engaging challenges with new expert-level Old World cards and gameplay variants. Prepare to join the battle for dominance!

The Horned Rat is a pretty difficult find. 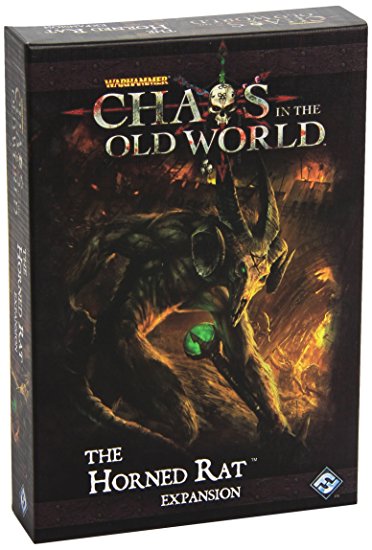 Fortunately, diligence pays off. Last week I found a copy of Chaos in the Old World on eBay, in perfect condition and still in the shrinkwrap, for $119.99, including shipping. Still more than I wanted to pay, but I did anyway. It arrived last week and I’m very happy with it.

I suspect I could have found copies at a better price eventually… but that’s an exercise for the interested reader. For now, I’m off to find a copy of The Horned Rat.

I covet. But since I’m even less likely to play a 3 player game than a 2 player game, I’ll bravely resist getting this, and ditto the WotC Assault of the Giants, for much the same reason.

You need a gaming group, Joe!

This is the most common complaint I hear from board gamers, actually…. lack of people to play with. I still yearn for my grad school days, when I could pull together 4-5 players with just a few phone calls. Maybe some day in an old folks home, I’ll have a gaming circle like that again!

Yeah, although TBH I’m generally pretty happy with the two-player thing — as it happens, a friend of mine will be coming in to town at the end of February for one of our periodic weekends of eating too much, watching things and playing games. I’m hoping to work Tyrants of the Underdark and/or Legends of Andor into the schedule.

Haven’t tried TYRANTS OF THE UNDERDARK. Let me know what you think.

Oh, I’ve played a few games of Tyrants with my girlfriend. I’d highly recommend it — it’s a fun little mix of area control & deck-building, and I really like the theme (you’re one of the Drow noble houses trying to spread your influence, which you do, in part, by recruiting assorted dragons or demons or abominations to help you out). Very much worth your time.

Have you ever played LORDS OF WATERDEEP?

Did you open the shrink wrap?

Don’t be ridiculous. Of course not.

Haven’t played Lords of Waterdeep, although it’s on my radar.

The challenge I face, of course, is that board games require even more storage space than books or DVDs, and I’m already pushing at the limits of what’s physically possible in my home …