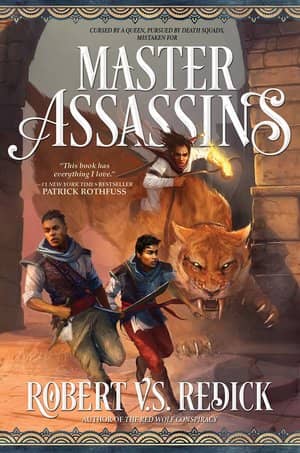 Robert V. S. Redick is the author of The Red Wolf Conspiracy and its three sequels in the Chathrand Voyage sequence. In her review for Black Gate Sarah Avery called the series,

Delightful… The first three books were delicious, but will he pull off the conclusion well enough to justify the time it takes you to reread the whole set? Yes…. I’ve just finished The Night of the Swarm, which I dove into without reacquainting myself with the earlier books, and though it was immensely satisfying, I will definitely be rereading the whole series.

Redick kicks off an ambitious new series The Fire Sacraments, with Master Assassins, in which two village boys mistaken for assassins become the decisive figures in the battle for a continent. It was released in hardcover and trade paperback in March by Talos.

Kandri Hinjuman was never meant to be a soldier. His brother Mektu was never meant for this world. Rivals since childhood, they are drafted into a horrific war led by a madwoman-Prophet, and survive each day only by hiding their disbelief. Kandri is good at blending in, but Mektu is hopeless: impulsive, erratic — and certain that a demon is stalking him. Is this madness or a second sense? Either way, Kandri knows that Mektu’s antics will land them both in early graves.

But all bets are off when the brothers’ simmering feud explodes into violence, and holy blood is spilled. Kandri and Mektu are taken for contract killers and must flee for their lives — to the one place where they can hope to disappear: the sprawling desert known as the Land that Eats Men. In this eerie wilderness, the terrain is as deadly as the monsters, ghouls, and traffickers in human flesh. Here the brothers find strange allies: an aging warlord, a desert nomad searching for her family, a lethal child-soldier still in her teens. They also find themselves in possession of a secret that could bring peace to the continent of Urrath. Or unthinkable carnage.

On their heels are the Prophet’s death squads. Ahead lie warring armies, sandstorms, evil spirits and the deeper evil of human greed. But hope beckons as well — if the “Master Assassins” can expose the lie that has made them the world’s most wanted men.

One more for my Balticon shopping list. I am so there.