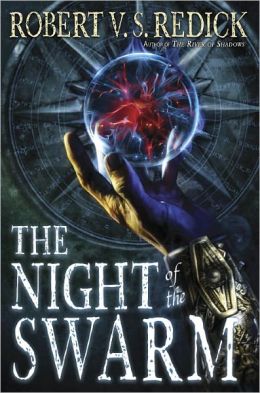 It’s one of the classic dilemmas all fantasy readers face: When the last volume in a series finally comes out, do you go back and reread from the start so you can reach the end with all the grace notes and loose ends fresh in memory as the author ties them off? Or do you dive in immediately because you’ve been longing to resolve the suspense of the last volume’s cliffhangers?

If you’ve been reading Robert V.S. Redick’s delightful series, The Chathrand Voyage, you face this decision again with the arrival of the final book, The Night of the Swarm. The opening volume, The Red Wolf Conspiracy, was Redick’s debut novel, so we’ve never seen him bring a series to closure before. The first three books were delicious, but will he pull off the conclusion well enough to justify the time it takes you to reread the whole set?

Yes. Do it. Go find your copy of The Red Wolf Conspiracy, or buy a new one if you’ve mislaid it. I’ve just finished The Night of the Swarm, which I dove into without reacquainting myself with the earlier books, and though it was immensely satisfying, I will definitely be rereading the whole series.

And if you’re a newcomer to The Chathrand Voyage, oh, you are in for such a treat. Get all four books at once, turn the ringer off on your phone for a few weeks, and set up an auto-response for your email, because you won’t want to leave the battered, glorious world of Alifros until you’ve seen its struggles through.

Our young heroes Pazel, Thasha, and Neeps — along with a ship’s company of fanciful, and sometimes frightening, supporting characters that Charles Dickens might have come up with if he’d been trying to adapt his favorite techniques from George R.R. Martin — have only been at sea for a year, but what perils they have weathered! They have resisted a madman whose army of followers worship him as a god, rescued Thasha from political assassination, fled by sailing ship across an almost unimaginably large and wild ocean, and rediscovered civilizations no one from their continent has seen in centuries.

As this fourth and final volume opens, Pazel and his closest traveling companions discover that defeating the foe they thought was the worst evil in Alifros is not enough. They have to clean up the mess the villain left behind, a mess that’s semi-sentient, utterly deadly, and capable of expanding until it blots out the sky from the whole of the world.

Pazel should have been a scholar, or a diplomat, perhaps a physician — a great many things — if only his mother hadn’t blessed and cursed him by amplifying his talent for languages. Any time he encounters a new language, even just a few words of it, Pazel learns the whole of it instantly. He pays the price for his unnerving talent with mind fits hours or days long, in which he can neither comprehend nor speak any language, though he howls and brays uncontrollably. More than once, he meets monstrous beings far older than humanity’s presence on Alifros, and perhaps older than any of the other human-like peoples of that world, and finds himself compulsively forming words in languages the human mind was never meant to think in. Redick does a remarkable job of making the old Lovecraftian horror of alien ideas, Things Man Was Not Meant To Know, feel intimately terrifying. Despite the mind-fits, despite his near-slave social status as the citizen of a conquered city, Pazel grows up over the course of the series into a hero — a thinking reader’s hero. 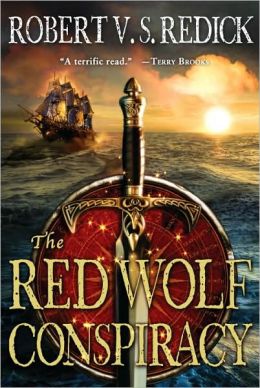 Thasha grew up imprisoned by privilege. At the opening of the first volume, the Fleet Admiral’s daughter prepares for the final stage of her studies at a soul-crushing boarding school she’s tried to escape from. Over the walls, in disguise, through secret passageways. Why does her beloved father always send her back? Though she has spent her holidays secretly learning martial arts from the family friend who’s supposed to be her dancing master, she has lost most of her youth to an academy that teaches all the stereotypical feminine wiles with the seriousness of the arts of war. When the Emperor chooses Thasha to be his nation’s Treaty Bride, supposedly to seal peace after decades of war, she comes to realize that those feminine wiles are indeed weapons almost as useful as her sword. She also comes to realize that her mind harbors a fragment of another being — that she was literally born to be a hiding place for someone else. Throughout the series, she struggles to balance her own ferocious will to live against the sacrifices her country and her world need from her, and against the necessary intrusions of the passenger in her consciousness.

It’s tempting to call Neeps the Ron Weasley of the series, but that would only work if the Weasleys had sold Ron into slavery and Ron had developed a rage disorder. Although Neeps is a clever boy, thinking is usually his last resort — what he does to clean up the mess after he’s followed his wild heart into trouble again. His loyalty and devotion hold the world together for Pazel and Thasha. He’ll fight anyone or anything to protect his friends. His friends turn out to be the best hope for saving Alifros, so the ship’s wiriest little tarboy throws himself at villains who operate on a planetary scale. When, in the third volume of the series, Neeps begins to take sick with a spell-plague that’s slowly making him less himself, the stakes in breaking the plague spell could not be clearer.

And then there’s the great ship, the Chathrand, a five-masted vastness with a population that, at least in the first volume, rivals that of some western states. I can’t vouch for Redick’s oceanography or physics, but he has obviously tried to figure out what it would really take to cross an equatorial ocean unbroken by any continents but at the poles, with only the sailing technology of approximately the 1700s. Of course, no class of ship invented in our world could do it, and only five ships in the history of Alifros were ever up for the challenge. The Chathrand is the last in the north. Only one remains in the south. None has crossed the Ruling Sea in centuries.

Even on a sailing ship that would, by the characters’ descriptions, probably dwarf an aircraft carrier, only magic can hold the timbers together over swells hundreds of feet high, through storms that would put Sandy to shame, and against enemies fierce enough, crazy enough, to give battle under such conditions. The Chathrand’s haunted by the ghost of every captain it’s ever carried. There’s a door that appears and disappears in different parts of the ship, and no one knows what will happen if it opens. Secret passages lead to days in the ship’s distant past and possible futures. Hide in one of those, and who knows what year you’ll find if you ever emerge?

The ship is home. The ship is a prison. The ship is alien. The ship is the only familiar place on a continent full of shocks and surprises. If you can just make it back to the ship, you might live. You do not want to die on that blasted ship. The ship will carry you into the nightmare you must defeat, and only the ship can bring you out.

I fear there’s no way to talk about the plot of this final volume without spoiling the earlier volumes for people who haven’t read them, so I will simply say that there is a victory, which satisfies, and that victory has many prices, all of them sharp enough to satisfy as well. Not all the characters survive to the end, and the losses are heartbreaking, often in just the way one wishes to have one’s heart broken. The cataclysms are chillingly cataclysmic. Some loves triumph, some loves break. The ass-kicking fight scenes are worthy of the best choreography you can imagine. The spectacles of beauty, doom, and magic are too weird and fresh in their vastness for Hollywood special effects to do them any justice, were Hollywood ever to try. The ship’s last moments on Alifros form an image worthy of myth. You will never forget it.