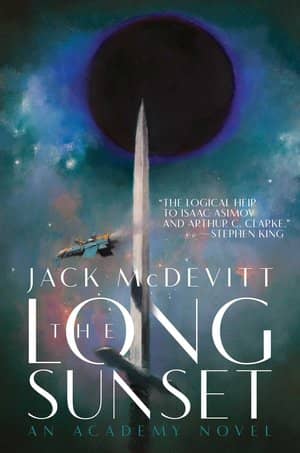 Jack McDevitt’s Academy series began with The Engines of God in 1994. The series has garnered four Nebula nominations (for Chindi, Omega, Odyssey, and Cauldron) and one Campbell Memorial Award win (for Omega). It has become one of the most popular and acclaimed science fiction series on the market (see the complete list of books in the series in my previous post here).

In the eighth and latest installment, The Long Sunset, Priscilla “Hutch” Hutchins discovers an interstellar message from a highly advanced race that could be her last chance for a mission before the program is shut down for good. Jeff Somers at The Barnes & Noble Sci-Fi & Fantasy Blog calls it “Classic space adventure in the best sense of the term… McDevitt’s optimism and enthusiasm for the profound mysteries of the universe shines through, lending the increasingly fascinating investigation an air of excitement as the crew sifts through dead planets…”

It arrived in hardcover from Saga Press last week. Here’s the description.

Hutch has been the Academy’s best pilot for decades. She’s had numerous first contact encounters and even became a minor celebrity. But world politics have shifted from exploration to a growing fear that the program will run into an extraterrestrial race more advanced than humanity and war.

Despite taking part in the recent scientific breakthrough that rejuvenates the human body and expands one’s lifespan, Hutch finds herself as a famous interstellar pilot with little to do, until a message from an alien race arrives.

The message is a piece of music from an unexplored area. Despite the fact that this alien race could pose a great danger and that this message could have taken several thousand years to travel, the program prepares the last interstellar ship for the journey. As the paranoia grows, Hutch and her crew make an early escape — but what they find at the other end of the galaxy is completely unexpected.

I’ve been a fan of Jack McDevitt’s work for decades. SEEKER is my favorite of his SF novels. I’m reading THE LONG SUNSET now. Love the John Harris cover!

Later this year, Jack has another collection of short fiction coming out from Subterranean.

I know what you mean! I thought John Harris was just taking some artistic license with that giant sword in space…. and then I discovered the novel ACTUALLY HAS A GIANT SPACE SWORD. How cool is that??

Have you read the previous books in the series? How do you think the series stacks up overall?

> Later this year, Jack has another collection of short fiction coming out from Subterranean.

Oooooo…. I didn’t know that. Thanks for the tip!