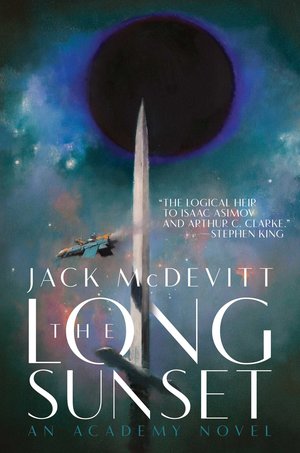 I discovered Jack McDevitt with his second novel, a slender Ace paperback titled A Talent For War, back in 1989. Since then he’s produced over two dozen novels and collections, including Ancient Shores (1996), Infinity Beach (2000), and the Nebula Award-winning Seeker (2005).

But his most acclaimed series has been his Academy novels. Seven have appeared so far, including four Nebula nominees and three Campbell Award finalists. It began with The Engines of God (1994), which was nominated for the Arthur C. Clarke Award. The eighth in the series, The Long Sunset, arrives in hardcover from Saga Press next month.

From Nebula Award winner Jack McDevitt comes the eighth installment in the popular The Academy series — Priscilla “Hutch” Hutchins discovers an interstellar message from a highly advanced race that could be her last chance for a mission before the program is shut down for good.

Hutch has been the Academy’s best pilot for decades. She’s had numerous first contact encounters and even became a minor celebrity. But world politics have shifted from exploration to a growing fear that the program will run into an extraterrestrial race more advanced than humanity and war.

Despite taking part in the recent scientific breakthrough that rejuvenates the human body and expands one’s lifespan, Hutch finds herself as a famous interstellar pilot with little to do, until a message from an alien race arrives.

The message is a piece of music from an unexplored area. Despite the fact that this alien race could pose a great danger and that this message could have taken several thousand years to travel, the program prepares the last interstellar ship for the journey. As the paranoia grows, Hutch and her crew make an early escape — but what they find at the other end of the galaxy is completely unexpected.

Here’s the complete series in order.