Most long-time SF fans are aware of the early ’40s fantasy magazine Unknown, edited by John Campbell as a companion to Astounding, and famous for encouraging a sort of “rational” fantasy. Much less well-known is the early 50s magazine Beyond, conceived by H. L. Gold as a fantasy companion to Galaxy. I recently read a couple of issues. I found interesting the degree to which they seem to be a sort of fantasy Galaxy-analogue in a way similar to the way Unknown was a fantasy Astounding-analogue. (That last pun definitely intended.)

Basically, I see the early 50s Galaxy as focusing on near-contemporary SFnal extrapolation, with typical “women’s magazine” characters (stereotypical housewives, stereotypical middle managers, etc.) dealing with mildly futuristic concepts. That’s an exaggeration, of course, and rather a caricature, but still I think it is true of at least a good portion of the early Galaxy. And in Beyond we see the same sort of characters, in almost exclusively contemporary situations, dealing with mildly fantastical concepts: genies, the devil, witches, wishes granted with undesirable side-effects, etc. I suppose another categorization might be “low-grade John Collier imitations.”

Each issue opens with a novella, and features a novelette or two and a few short stories. In longstanding Galaxy tradition, the dividing line between short story and novelette is pretty low — about 6000 words maybe, and one of the two novellas is about 16,000 words. Still, there was certainly no formal definition then, so who could complain? At least they didn’t label 10,000 word stories “Complete Novels.”

The two issues I have are May 1954 (volume 1, number 6) and July 1954 (volume 2, number 1). These were the sixth and seventh of ten total issues, according to the Contento/Miller index. The name of the magazine seems to have changed from Beyond Fantasy Fiction to Beyond Fiction for the last two issues, and the last two were numbered but not dated as to month/year.

The best story in each issue is the longest. The novella in the May issue is “Sine of the Magus,” by James Gunn, a pleasant enough story about a group of people who have developed magic into a science, and a power struggle between the folks who want to use it for the good of humanity and those who want to keep the knowledge secret for individual power. It’s told by a private investigator who is hired to investigate a “covention” (he thinks it a misspelling but it’s not) and find out one fellow’s name. Of course he meets a beautiful woman and… well, you see where it will go.

The novella in the July issue is “No More Stars,” by “Charles Satterfield” — a name Frederik Pohl used quite often as a pseudonym, though this time, its first use, it’s a Pohl/Lester Del Rey story. It’s about a man snatched from death into a world in which some sort of Ptolemaic magic/astrology is true, and an attempt to save the literal firmament from destruction. Not bad, kind of original. 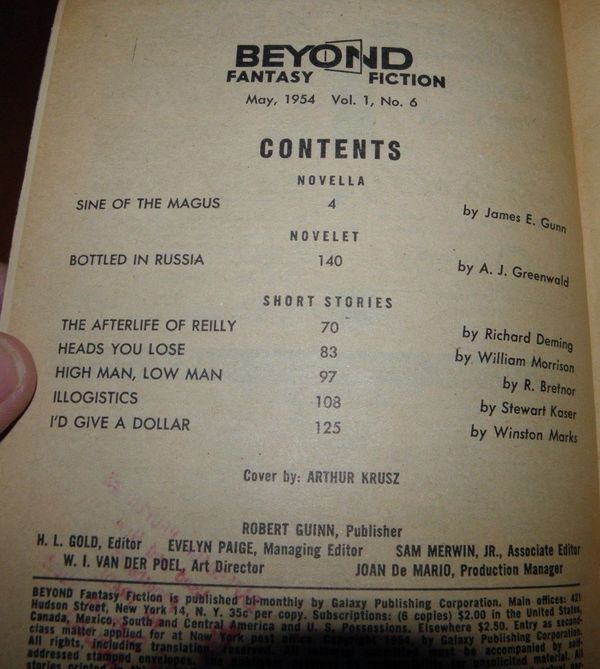 I didn’t really find the shorter stories overly memorable. From May the novelet (spelled such, just as F&SF does to this day) was “Bottled in Russia,” by A. J. Greenwald, about a bad communist on a collective farm in the Soviet Union who encounters a magic carpet which begins by dispensing vodka — and ends up rather discombobulating the Soviet system. “The Afterlife of Reilly,” by Richard Deming, is about a barfly who is given the opportunity to preview the afterlife, with such features as true equality, cleanliness, no war — and a punchline. William Morrison’s “Heads You Lose” is about a boy who embodies the old phrase “if your head wasn’t stuck on, I’d bet you’d lose it too!” quite literally. “High Man, Low Man” by R. Bretnor considers a cliche businessman who has lost all his money and is ready to jump out the window, and is given a chance to reevaluate his value system. “Illogistics,” by Stewart Kaser, has a retired Colonel dealing with Robin Goodfellow. Finally, Winston P. Marks’s “I’d Give a Dollar” is about the potential dangers of saying “I’d give a dollar to …” if perhaps the wrong entity accepted your offer.

From June there were two novelets. Evelyn E. Smith’s “The Agony of the Leaves” is about a bachelor fending off the advances of two rival witches, and his rescue by yet a third exotic young witch. Roy Hutchins’s “Miss Tarmity’s Profession” is about the two most upstanding citizens of Poverty, Vermont, the selectman Mr. Higgins and the schoolteacher Miss Tarmity; and how the Devil all unknowing brings them together. 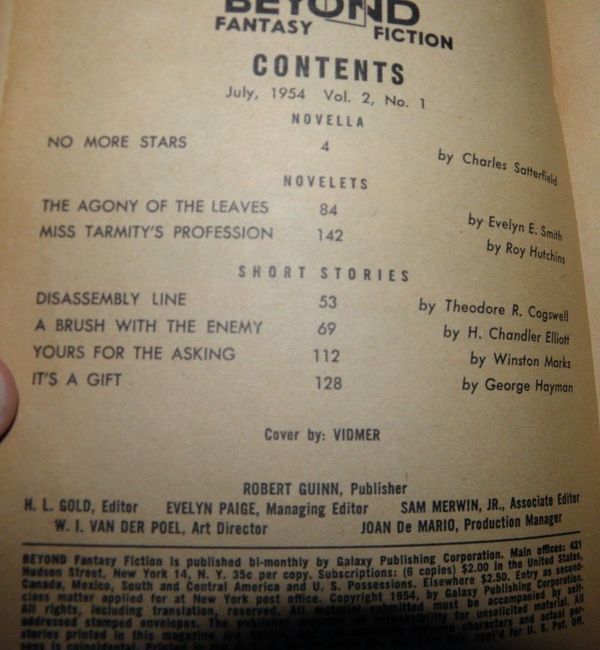 Of the short stories, Theodore Cogswell’s “Disassembly Line,” about a plan to turn Hell into a rehab place, was kind of cute, perhaps the best of the shorter works in these two issues. H. Chandler Elliott’s “A Brush With the Enemy” is about an old German maker of toy soldiers and his problems when mass production threatens to ruin him. Puck and Oberon cause mischief in the advertising world in Winston Marks’s “Yours for the Asking.” And “It’s a Gift,” by George Hayman, brings fantasy to the world of aircraft making, as a mechanic learns he has a gift of fixing messed up parts that only works when he’s angry.

Taken as a whole, these are a curiously homogenous set of stories. There’s a notable tendency to apply traditional fantasy ideas (deals with the devil, witches, the afterlife, Puck) to 1950s American settings — sensible enough, but seeming self-similar when presented all in a lump. The tone tends to the slightly sardonically amused, as well. The result is a set of competent but wholly unmemorable stories.

There are no additional features save brief snippety ones, for example one called “All the Trimmings” that comments on the voodoo practice of using hair cuttings for magic. The stories are illustrated as usual in those days. The covers are by Arthur Krusz, for May; and Rene Vidmer, for July — I liked them both.

Rich Horton’s last article for us was his Hugo Nomination Thoughts, 2018. His website is Strange at Ecbatan. See all of Rich’s articles here.

Ha! That aligns with my perception pretty well.