Stanley G. Weinbaum was born on April 4, 1902 and died of lung cancer on December 14, 1935, only 17 months after publishing his first story. During that time, he made an indelible mark on the field. Weinbaum Crater on Mars is named in his honor and in 2008, he received the Cordwainer Smith Rediscovery Award.

Weinbaum’s “The Worlds of If” was first published in the August 1935 issue of Wonder Stories, edited by Hugo Gernsback. Following Weinbaum’s death, it was included in Dawn of Flame: The Weinbaum Memorial Volume. Mort Weisinger reprinted the story in the March 1941 issue of Startling Stories and it was included in issue 1 of Fantasy, edited by Walter Gillings.

When Fantasy Press published A Martian Odyssey and Others, a collection of Weinbaum’s stories, “The Worlds of If” was included. Robert Silverberg selected it for Other Dimensions: Ten Stories of Science Fiction. Julie Davis included it in Science Fiction Monthly, in the July 1975 issue of the paperback series. When Ballantine published The Best of Stanley Weinbaum, the story was reprinted again. 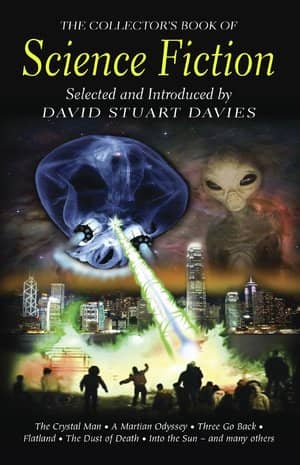 “The Worlds of If” introduced the character Dixon Wells, who would appear, along with his former professor, van Manderpootz, in two additional stories. Wells is a hapless young man who is habitually late for everything and van Manderpootz is a vainglorious physicist specializing in “the New Physics” (or relativity) and looks down on everyone who has come before him.

A discussion of Wells’s tardiness leads van Manderpootz to introduce him to the idea of parallel worlds and the invention that will allow him to see what has happened in those worlds. The story isn’t about time travel, but dimension travel, similar in some ways to Murray Leinster’s 1934 story “Sidewise in Time,” although Weinbaum’s story only permits observation, while Leinster’s allowed for interaction.

Weinbaum’s story is a fun tale, made more interesting to the modern reader since it is set around the year 2022 and refers to the economic boom years of 2008-9 and the crash of 2010, demonstrating that Weinbaum may not have been the world’s best prognosticator (he does nail the travel time to Europe, but sees it happening by rocket rather than airplane).

Stanley Weinbaum should *not* be forgotten. His stories are just downright excellent. His portrayal of extraterrestrial aliens was so “alien”! Focusing upon this facet of his writing, I wish he had been more of a lasting influence on the field instead of the little grey or green men trope.

[…] Black Gate » Birthday Reviews: Stanley G. Weinbaum’s “The Worlds of If”. I got into this author via the great Ballantine “Best of” series. In Weinbaum’s volume, Isaac Asimov wrote an introduction calling him “the second nova” (between, and different from, but of a similar magnitude to, Doc Smith and Robert Heinlein) and he certainly was a bright light of the SF firmament. […]