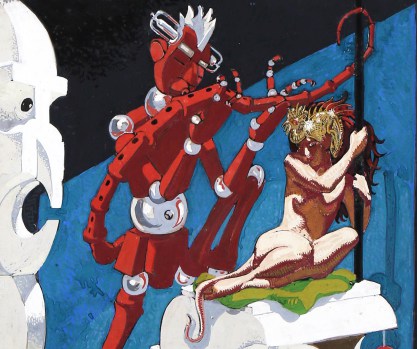 Mahlon Blaine was born in 1894 and was blind in one eye. People have been writing his biography since the 1920s and that’s about all they can verify. He provided the cover art, a faceless figure carrying a sword and spear, for Sir Hugh Clifford’s The Further Side of Silence. When asked for a few words about his life, he provided these:

Mahlon Blaine has illustrated these Malayan dramas with the magic of his own experience. A New England Quaker descended from staunch old New Bedford Whalers, Mahlon Blaine went to sea at fifteen and sailed before the mast in one of the last of the old wind-jammers. Then under steam he commuted from the Pacific Coast to the Atlantic, to the Mediterranean, to the Arctic to all of Kipling’s Seven Seas where a merchantman seeks cargo. It is such eastern ports as Macao, Port Said, Hongkong, Pearl Harbor, that have given him his gallery of wicked, twisted Oriental faces and the museums of the world that have been his art schools. He has sailed up the Congo to make a collection of African masks, rescued fellow countrymen from jails in Indo-China, and nosed into many a Malay river for strange cargo and shipped many a Malay crew. He thinks that Sir Hugh Clifford has an uncanny knowledge of native psychology and can substantiate many of the stories by his own experiences.

Not one word is true, except possibly for the last sentence and “he.”

Normally, a liar of that magnitude would be destined for pulp magazine covers but he veered into the world of high art, only occasionally dropping into our world of f&sf, most notably for the cover of Prime Press’ translation of Alexandre Dumas’ The Wolf Leader in 1950… 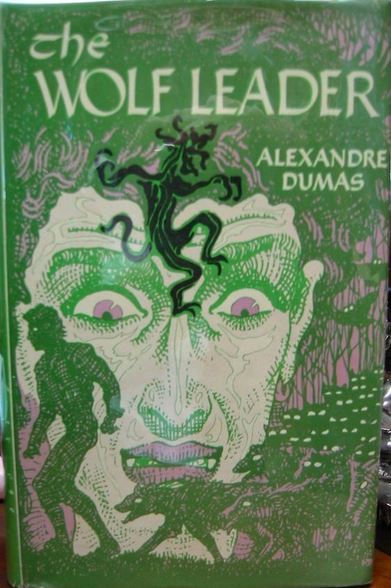 and a series of Burroughs’ reprints for Canaveral Press in 1962. Canaveral didn’t have to go far to seek him out. Blaine literally lived upstairs of their offices. Starving artists of the world, take note.

(Blaine also did the interior art for Here Comes Somebody in 1935, not fantasy but notable for being written by Ben Hur Lampman, whose real name was Ben Hur Lampman. I will pause the column here for you to check the veracity of that statement.)

Robots might rank eleven hundredth on a list of plausible subjects for a man with those tastes in art, but the 1930s were the decade of technological futurism invading high art and Blaine apparently got caught up in the excitement. He came to the attention of Paul R. MacAlister, an up-and-coming star of modernist interior design for the superwealthy. He was the kind of guy who not only had an office in the then-brand new and elite Rockefeller Center but “conceived and directed a display of furnishings for decorators’ use known as the Permanent Exhibition of Decorative Arts and Crafts, which occupied an entire floor in the main office building.”

One just wasn’t a somebody in the 1930s without walls covered in murals, so MacAllister commissioned Blaine for an epic set. Blaine responded with robots, and gargoyles, and nudes, in pulp terms a blend of covers from Astounding, Weird Tales, and Spicy Stories. These are three out of a total of ten original concept paintings, titled Nude Dancing with Robot, Feeding the Man, and Cowering Nude with Robot.

The other seven contain more nudes, mechanical birds, giant Rube Goldberg gadgets, and Daliesque imagery aplenty. Those futuristic gargoyles, already made obsolete by modern skyscrapers, would have been instant tourist attractions for anyone brave enough to attach them to a retro structure. For unknown reasons Blaine used the pseudonym G. Christopher Hudson (and signed the gouaches with a “G”) and for equally unknown reasons MacAllister never went through with the project. The artwork survives and can be purchased for slightly less than a mint first edition of I, Robot. Up to you.

Steve Carper writes for The Digest Enthusiast; his story “Pity the Poor Dybbuk” appeared in Black Gate 2. His website is flyingcarsandfoodpills.com. His last article for us was Axle and Cam on the Planet Meco.

Very cool. Thank you for the article.