Robot families are rare, especially metal ones. They’re rare even on the planet Meco, where little Cam is the only boy around. Cam has a father, and an uncle, and a grandfather. Good thing a female nurse is introduced in one episode or I’d have my doubts about the robot reproductive process.

“Axel and Cam on the Planet Meco” (Axle is Cam’s father) ran in about the last place you’d ever think to find a robot strip: Popeye Comics. The strip ran as a backup in #26-32, October-December 1953 to January-March 1955. Those were the heady years of stuff once reserved for pulp magazines slopping over into every crevice of popular culture.  Popeye was hired to pilot a rocket ship to the moon in a 1949 issue and Sherman, from the backup strip Axle & Cam replaced, took a ride in his father’s flying car in 1952.

Bud Sagendorf, an assistant to Thimble Theatre creator E. C. [Elzie Crisler] Segar, spent two decades doing all the Popeye comics books and finally took over the newspaper strip in 1959. (Segar died in 1938 and his empire was parceled out as it grew and grew.) Sagendorf gets credited for everything that appeared in the comics, both art and writing, maybe why Popeye was just a quarterly in those days.

The first installment barely exerts enough force to encourage even a young kid to stick to the page, although it sets up the premise. Hundreds of years ago – ol’ Gran’dad was seven hundred years old the day he fell apart – the men who built the robots left the planet. The robots keep on ticking because humans left behind “black mechanics” to fix the machines. Their blackness is indicated by a black chestplate with a big red “M” on it, sorta like a superhero’s, and they don’t look at all frightening: they have big smiles, unlike the scowling Axel. So why the fear-stricken warning emerging from the flat-screen wall tv? They fix machines by dismantling robots for working parts. Cam saves the day by shooting the one working over his father – with his water pistol. Water is the hugest bane of robots.

Not terribly promising a start. That whole storyline is so terrible that Sagendorf will pretend none of it ever happened. The next issue has the lonely Cam going to a giant junkyard of free robot parts to build himself a companion, Rattles the robot dog. Axle can’t afford to feed another mouth (the price of grease has gone up three bolts a pound) and orders him dismantled. You’d think his experience with the black mechanic might have softened him, but Axle spends every moment being annoyed by his son. Cam is so unhappy he starts crying, which also annoys Axle. “You’ll get rusty and I’ll have to have you replated!’ he scolds. (I hope everybody reading this stops here and takes as long a moment as I did to think about the humans who designed their robots with tearducts.) That night, though, burglars sneak into the house. Rattles stops them. Cam, you see, thoughtfully made his tail out of a screwdriver and he dismantled the burglars.

Axle is even meaner the next issue, although he has some cause. Cam is caught rafting on the lake, which is a whole lot worse than if your kid did it. At home Cam is boyishly obstinate about eating his healthy lunch of Vita-Amps Electric Juice. He wants a frozen grease cup. (The joke is repeated in the animated Robots film, when the opening shot of Rivet Town includes a vendor selling Auntie Freeze’s ice grease cones.) Basically, his problem is that he’s acting like a human boy, a condition so horrifying that when the robot nurse hears this she declares it’s “a case of 702-A!!!” 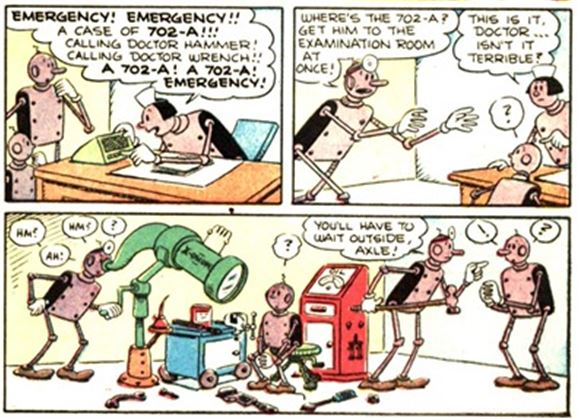 All Cam wants to do is have fun. “Robots weren’t meant to have fun … We were meant to work!” instructs Axle. There hasn’t been a case of “I wanta be human” for 500 years and Dr. Wrench and Dr. Hammer are stumped. They finally decide to show him how silly he’s being by playing his dumb human game of baseball. “Three hours later” the adults kick him off the diamond because they’re having too good a time playing. (While I’m spending three hours wondering: What kind of insult is “He swings like a dishwasher!”?) 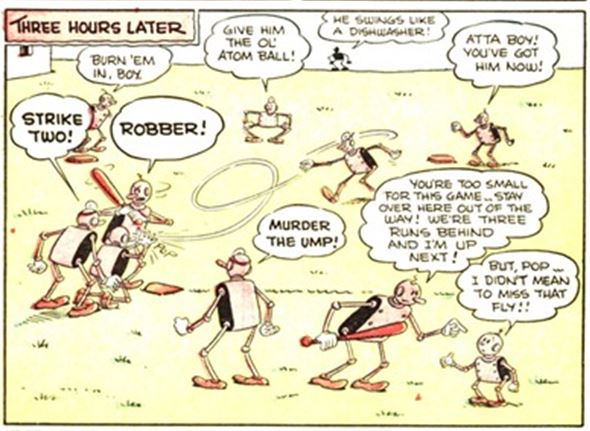 In issue #29, unseen by me, Cam helps his Pop out with atomic powered wheels, and you probably already know the ending. Sagendorf’s disposition must have improved because in issue #30, Axle finally gets a smile on his face and occasionally praises his son, although not when he’s around to hear. 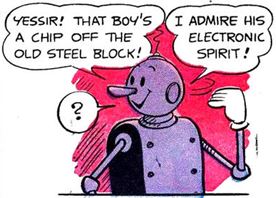 When Cam is around Axle daddishly says things like, “Stop chewing on that battery! Do you want to ruin your supper!” And when Cam wants to watch “people-vision” on their tiny-screened 50’s-style console television, “”Don’t sit too close or you’ll wear out the tubes in your eye-circuit!” Anyway, Cam sees a kid wearing a propeller beanie and assumes that Earth kids can fly so he builds himself a propeller beanie hat that really flies. Just at the nick of time, too. A “uranium-eating dragon!!!” attacks the town, but Cam is able to lead it over a cliff and into the ocean. Yes, the water-fearing robots built their city bordering a lake and an ocean.

I couldn’t find issue #31, although in it Cam runs away from home which makes Axle, well, I guess we all can guess. In the last strip, Axle, like any good suburban dad, decides to enrich his lot with a beautiful lawn. Cam decides he’ll be helpful, an intention whose outcome anyone who’s watched a 50’s sitcom could predict. He builds a “super lawnmower” larger than the house. It cuts the grass… down to about six inches under the surface. “Run for your life, Pop!”  he cries. Pop snarls, while beating him over the head with a wrench,” “Don’t stop to think about my life… Start to worry about yours!” The end. And that really was. 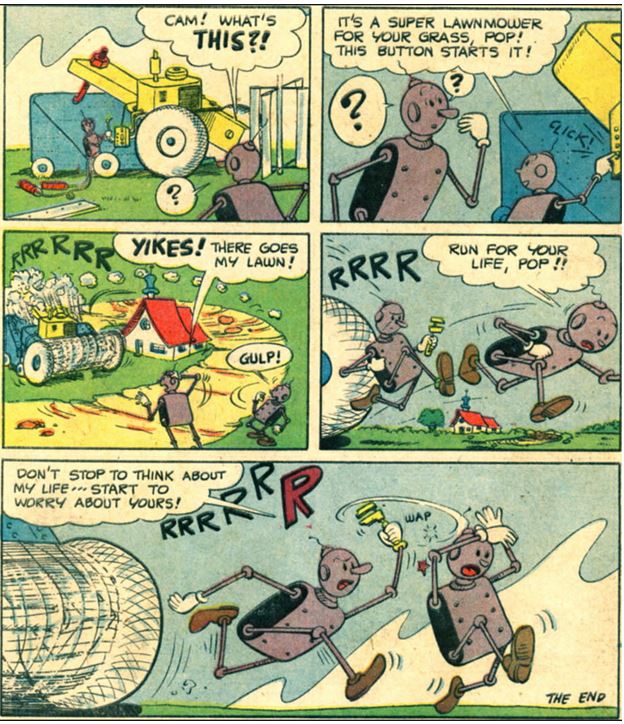 Steve Carper writes for The Digest Enthusiast; his story “Pity the Poor Dybbuk” appeared in Black Gate 2. His website is flyingcarsandfoodpills.com. His last article for us was The Wild Weird World of Dr. Goldfoot.

Great to read about a series I’d never heard of. A fun concept, but sounds like the execution didn’t quite live up to its potential. Still, great to see Sagendorf drawing a different cast of characters.