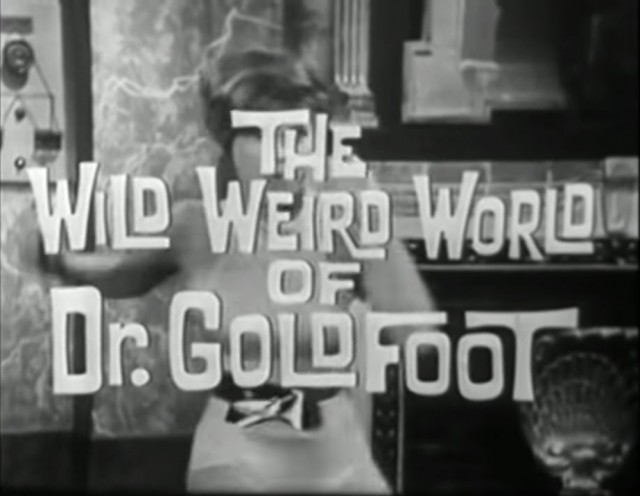 Those who complain that today’s movie obsession with sequels and spinoffs is different from yesterday’s Hollywood should be strapped into a chair and forced to watch Dr. Goldfoot and His Bikini Machine. If you don’t remember this epic, Vincent Price at his feyest played Dr. Goldfoot, modeled after Bond supervillains Dr. No and Goldfinger.  “My aim is diabolically simple. I am going to control the world. I have invented the ultimate in ultimate weapons, the one weapon that can positively destroy man: woman.” 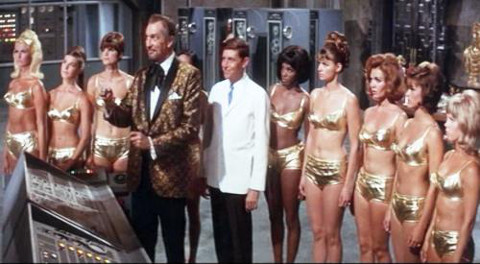 His supersexy robots would seduce the world’s millionaires, become their heirs, and then kill them. No laborious tinkering with tubes and wires for him. His girls (modeled after Bond Girls, and besides, this was 1965) popped out of a toaster oven on steroids, fully formed. They shared with Bond the 1960s hypocrisy on female portraiture: the girls debuted already discreetly clad in bikinis, showing everything and nothing at the same time. (The movie’s original title had been Dr. Goldfoot and the Sex Machine but of course that didn’t stand the light of day.)

Robots were an inevitable plot mechanism for American International Pictures (AIP), run by James H. Nicholson and Samuel Z. Arkoff. In the last gasps of pre-Beatle era 1963, AIP struck it big with Beach Party. Teen idol Frankie Avalon and Disney princess Annette Funicello (Frankie and Annette!) cavorted at some supersunny California beach to the tune of songs by Dick Dale and the Del Tones, squaring off against the unsupervillainy of motorcycle gangster Eric von Zipper (played by Harvey Lembeck). Beach movies were nothing new – Gidget and Where the Boys Are had earlier been hits – and the cast were all in their 30s and 40s, but no one seemed to care. Made for a pittance of around $250,000 it grossed over $2,000,000 (don’t quote me: sources are all over the place).

Over the next two years AIP followed it with Muscle Beach Party, Bikini Beach, Beach Blanket Bingo, and How to Stuff a Wild Bikini, not to mention spinoffs Pajama Party, Ski Party, and Sergeant Dead Head. By 1965, the genre was a fading joke with a new gimmick sorely needed. Parodying James Bond movies was already a lucrative business, so professional copycat AIP naturally followed. Dr. Goldfoot and His Bikini Machine drew a million-dollar budget (not bad when you consider that Goldfinger itself merely cost three million), and cast a troupe of AIP veterans, not just Price and Avalon, but also Dwayne Hickman, Fred Clarke, and 24-year-old Susan Hart, who just happened to be newly wed to James H. Nicholson, 49, and was being groomed for superstardom. 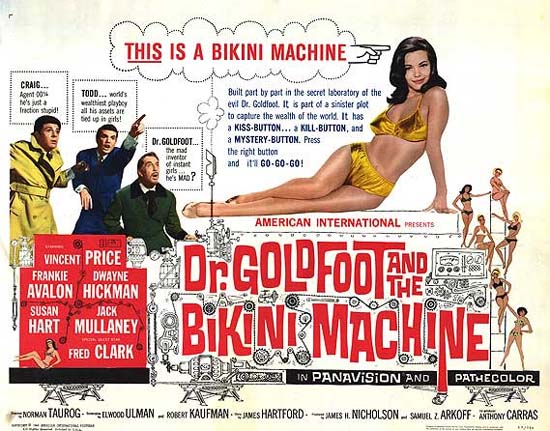 Taking no chances, AIP hired The Supremes, in the midst of their string of #1 hits, to sing the title song, ordered a chase scene through San Francisco three years before Bullitt, and pre-empted Shindig with a half-hour long commercial. Shindig, for those under 70, was, with Hullabaloo, the only way teens could see rock music on television. Its timeslot had the primo demographics. On November 18, 1965 the teen world was blasted with The Wild Weird World of Dr. Goldfoot. (This was two weeks after the movie’s release, but movies rolled out slowly: nobody then cared about opening weekend grosses.) Vincent Price returns as Dr. Goldfoot and so does Susan Hart as Diane, but the rest of the cast are Tommy Kirk, Aron Kinkaid and Harvey Lembeck, very conspicuously not in Bikini Machine (except as cameos). 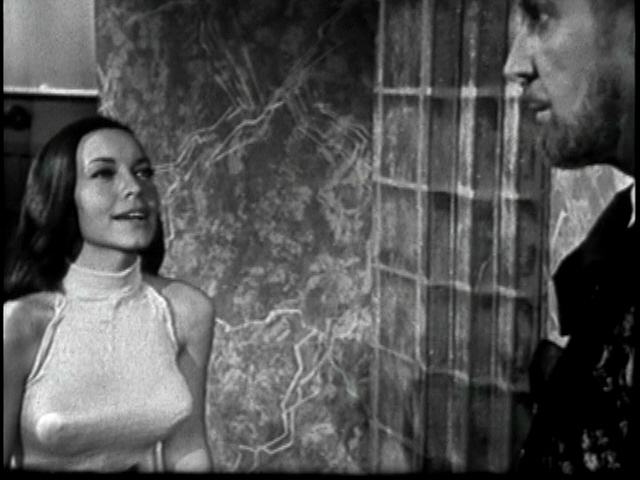 Now here’s an obscurity about robots I can sink my teeth into. Or would if it had any substance whatsoever. Lewis Hayward, hanging around the lot after writing Pajama Party and Sergeant Dead Head, produced and co-wrote (with newcomer Stanley Ross) but apparently worked off the movie’s many pre-production drafts. Surely – surely! – someone would otherwise have mentioned that the movie had changed its title to Bikini Machine. You heard right: the half-hour commercial for a girls-in-bikinis movie neglects to include a single bikini. That alone ranks it among the greatest fails in advertising history. Additionally, the original conception for the movie involved musical comedy. Sources disagree on whether the songs in Wild Weird World were repurposed from an early movie concept. Seems likely to me. Something other than LSD has to account for the commercial’s opener, with Lembeck as Goldfoot’s assistant Hugo (a role played in the movie by Jack Mullaney as Igor), talk singing his way through a ditty about Goldfoot’s teleporter, another plot point that never made the final movie. A bevy of beauties behind him in their one-piece swimsuits (not bikinis) dance to the music.

Suddenly a plot intrudes. A government agency, the Secret Intelligence Command (SIC) [sic], has turned the brain of Malcolm, played by Kirk, into Wikipedia. His handler is secret agent “double oh and a half,” played by Kinkaid. (Neither Malcom nor 00½ have exact counterparts in Bikini Machine.) Price keeps blowing the name and calls him oh and a half, sorta crushing the joke.

Anyway, Goldfoot uses his super television camera that can see and hear anything on earth to spy into a secret chamber at the Pentagon, and decides he wants this “walking encyclopedia.” A seductive robot is called for, so he tells Hugo to start “the machine.” In a sane world, this line would read “start the Bikini Machine,” since that’s the propose of this commercial. We are instead in a Wild Weird World, where there are no bikinis. Another opportunity squandered.

The untitled Machine ejects its fembots like donuts at Krispy Kreme. After rejecting one that too tall and one that’s too short, Goldfoot settles for Susan Hart’s Diane. Hart was hired (and, no doubt, married) for her Playmate quality looks and body (36-20-35 said the pressbook) so she is believably irresistible. (The too-short competitor she bested was the 4’11” Sue Hamilton, both an AIP regular and Miss April 1965.) 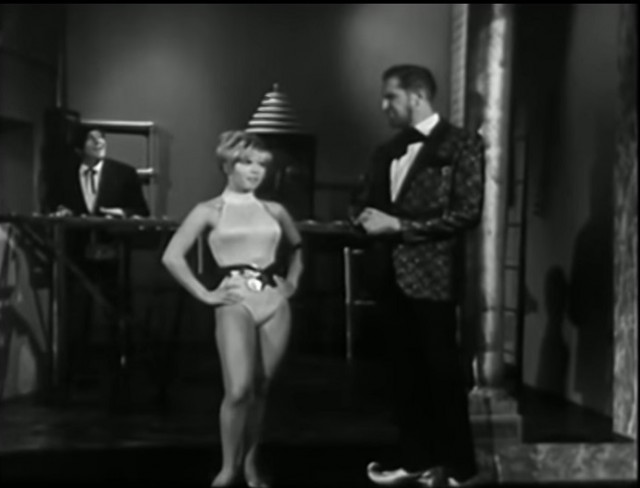 Diane, fortuitously, thinks Malcolm is cuuuute, which, honestly, he isn’t. A fault in her circuitry, perhaps. She has many. When Hugo asks her for a hand, guess what she gives him? She was “hastily constructed,” Diane explains.

Malcolm feels cooped up in the Pentagon vault and wants a walk in the park, where Hugo and Diane meet him and 00½. For some reason the park is full of the earlier dancers shaking their go-go boots to generic rock. Diane plops herself onto Malcolm’s lap and promptly freezes, making noises like a tape player on fast forward, an excuse for sight gags with concealed telephones. When she recovers, her faulty “direction finder” lands her on the lap of 00½, who is treated to a full blast of her irresistibility. They wander off for some witty banter and a duet, during which the faulty Diane reveals she works for Dr. Goldfoot. Even the clean-cut 00½ is torn in half: his duty or Susan Hart? He chooses Hart. No, duty. No, Hart. But why choose? Diane offers to take him to Malcolm without being asked. 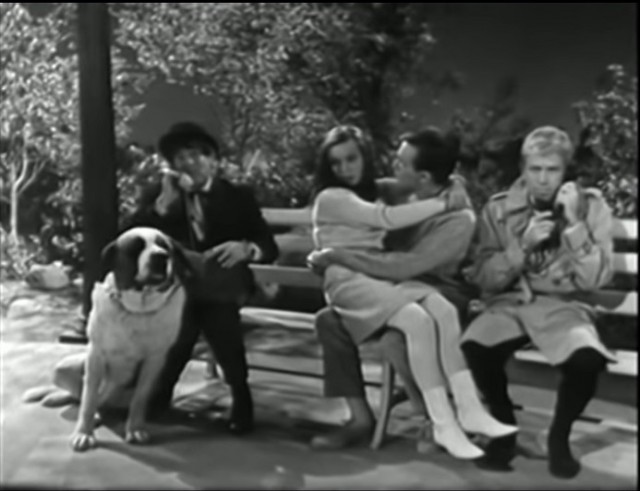 Where is Malcolm? More interestingly, how in the world does Diane know? She was off with her blonde hunk when Hugo on his own initiative seized the opportunity to abscond with Malcolm. The despondent nebbish Malcolm – blonde hunks always get the girls – is easily lured when Hugo tempts him with a place “where there’s a lot of girls,” Dr. Goldfoot’s laboratory, which he sells as a night club with a great floor show. “The latest thing, a scientific astronaut’s-type night club” called “All Systems a Go Go.” More dancing ensues before Diane and 00½ stroll in.

Goldfoot orders Diane to take out 00½. “She may look like a real girl, but she is no more than a robot. Instead of flesh and bone, she has steel and wires.” “Well, nobody’s perfect,” Malcom says, Some Like it Hot being only six years in the past at that point. “The strength of the locomotive is hidden beneath the frail exterior of my Golden Girls, my robots. … She was created for one purpose. She is being programmed for destruction.” Well, she was, until love got in the way. Diane pushes the Doctor and Hugo into the teleportation machine, which is now set for the Moon. Yay, good guys.

Is there an ending gag? Of course. Diane has disappeared and 00½ and Malcolm are escorted into a police car to return to the Pentagon. Who’s driving? Goldfoot and Hugo. “Fasten your seat belts,” Price purrs.

As impresario Sol Hurok said, “If people don’t want to come, nothing will stop them.” Whether Wild Weird World itself killed the box office or the release of Thunderball opposite it did so or it was the wrong movie for its audience, people stayed away from Bikini Machine in droves. AIP made one last stab, starring the usual suspects five months later in The Ghost in the Invisible Bikini, a quick revision of the announced Pajama Party in a Haunted House. It did respectable business. Nevertheless, that ended the Beach Party string of movies. AIP switched over to “sci-fi” and biker films.

And yet, Hollywood will be Hollywood. A sequel to Dr. Goldfoot appeared on cue in 1966. For whatever whims of the box office gods, Bikini Machine did well in Italy, so an Italian production shot in both languages and featuring the comedy team of Franco and Ciccio was released in both countries, in wildly different versions as Dr. Goldfoot contra el Mundo and Dr. Goldfoot and the Girl Bombs.

Only Price was retained from the original, with teen idol Fabian replacing Frankie Avalon. A footnote’s footnote, I can’t find any information on its budget or gross, but it apparently bombed spectacularly. If you like candidates for the Worst Movie Ever Made, give it a try. And tell me how it ends. I couldn’t make it that far, not even for the sake of science.

Steve Carper writes for The Digest Enthusiast; his story “Pity the Poor Dybbuk” appeared in Black Gate 2. His website is flyingcarsandfoodpills.com. His last article for us was The Silver Eggheads by Fritz Leiber.

Lots of fun to read about this movie. More so, I’m guessing, than actually seeing it. I had heard of the original, but had no idea there was a sequel!