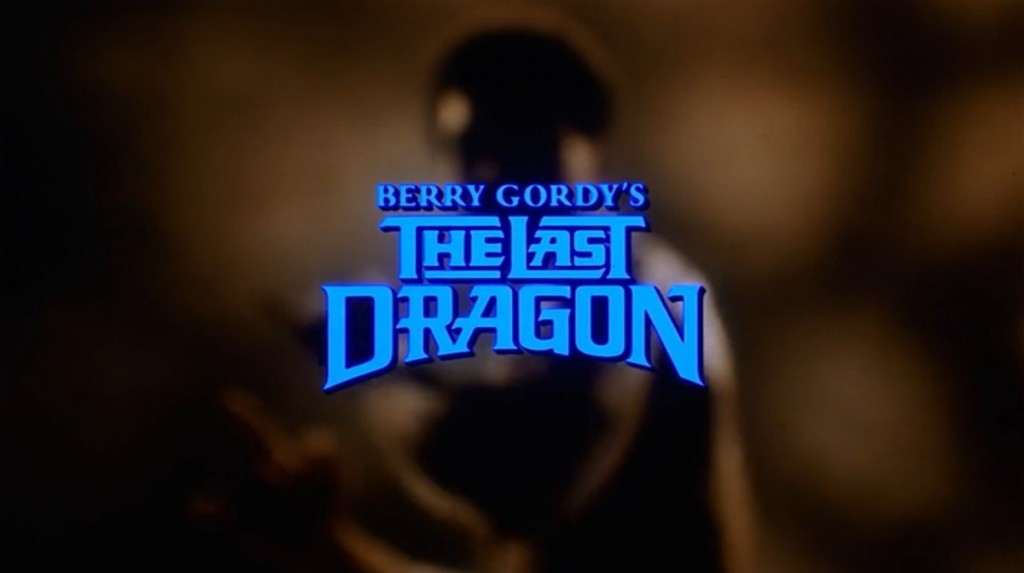 This week I have two reasons to write about The Last Dragon, aka Berry Gordy’s The Last Dragon. First, the biggest black superhero movie ever produced arrives in theaters this weekend, Black Panther. If projections are accurate, it will steamroller all February opening records with a domestic box-office take of $200 million and become a cultural touchstone for 2018. It’s the right time to celebrate with one of Black Panther’s earlier progenitors in black superhero movies that isn’t Blade. (Nothing against Blade, but it’s the example the other magazines will cover.)

On a double bill with Big Trouble in Little China, I’d show The Last Dragon first. This is based on my guidelines for crafting double features — a subject I’ve given far too much thought — that either 1) the lesser quality film goes first, or 2) the lighter/less grim film goes second, whichever factor feels dominant. Since both movies are on the same level of buoyancy and feel-good fun, The Last Dragon opens for Big Trouble in Little China.

Yes, The Last Dragon isn’t near the artistic achievement of Carpenter’s classic. It doesn’t have the subversion, whip-smart dialogue, and hilarious central gag, nor the wild fantasy elements and production design. The only supernatural aspect of The Last Dragon is “The Glow,” a color projection around the body of a fighter who has attained a supreme level of mastery to become superhuman. Although Last Dragon director Michael Schultz has an extensive film and television resumé which includes two classics, the multi-character comedy Car Wash (1976) and the coming-of-age tale Cooley High (1975), he’s not a towering genre auteur like John Carpenter. (Schultz probably leaves 1978’s superflop Sgt. Pepper’s Lonely Hearts Club Band off his CV.)

But, like Big Trouble in Little China, The Last Dragon was ahead of its time. It beat out the Teenage Mutant Ninja Turtles phenomenon for kid-friendly urban martial arts action, and it has a multicultural cast without making a show of it. This something I find wonderful about the movie: it acts as if it’s no big deal to have a young black kid in Harlem as a kung fu superhero who hangs out with black, white, and Asian kids. An early scene in a local theater shows an audience of all ages, races, and orientations having a grand time watching Enter the Dragon together. That sounds like a great world to live in. 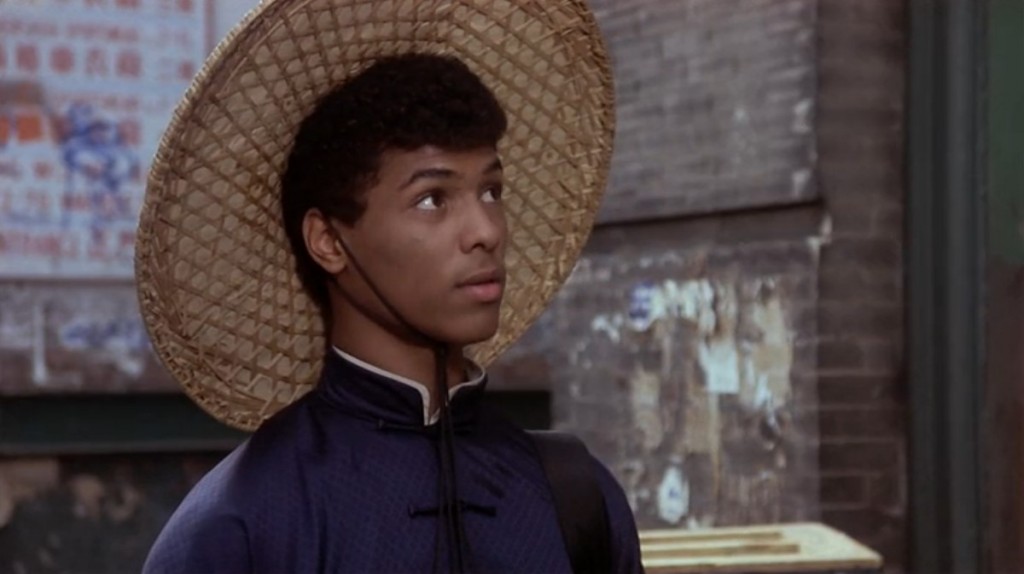 The Last Dragon stands at a compelling cultural crossroads. While looking forward to Ninja Turtles and a Hollywood that would one day release a $200 million Black Panther movie, it’s also a love letter to the Hong Kong martial arts films of the ‘70s and their part in African-American culture. Bruce Lee movies made a huge impact on black audiences in the 1970s, and the kung fu genre remained popular throughout the decade because of how well it played in inner city cinemas. Bruce Lee resonated with black viewers as a non-white action hero who was a renegade against the entrenched powers-that-be. After Lee’s death, black audiences continued to embrace kung fu — not only overseas films from the Shaw Brothers and Golden Harvest, but a homegrown crop with its own stars like Jim Kelly and Ron “The Black Dragon” Van Clief (who arranged the fight scene for The Last Dragon): Three the Hard Way (1974), Black Belt Jones (1974), Black Dragon (1974), Cleopatra Jones and the Casino of Gold (1975), The Bamboo Trap (1975), and Hot Potato (1976).

Produced by Motown Productions, a division of producer Berry Gordy’s famous Motown Records, The Last Dragon was a genre-mashing movie adding comedy and music, and starring a gentler hero seeking his identity within his own world; someone younger viewers could identify with. It’s a family-friendly action entertainment from that unique period in the 1980s where every weekend at the theaters provided a new, colorful addition to childhood fantasies.

The Last Dragon is an aggressively ‘80s experience, with everything from shutter shades (man, those look dumb) to DeBarge performing “Rhythm of the Night.” The entire soundtrack is a neon bracelet nostalgia bender featuring the current Motown Records talent pool. Motown wasn’t in best place in 1985, with recording artists like Debarge, Rockwell, and the movie’s co-star Vanity on the soundtrack. But Stevie Wonder was still around and Smokey Robinson’s on the album too, so it’s not only ‘80s ephemera. Plus, I’ll admit to liking “Rhythm of the Night.”

The movie uses a familiar but sound story archetype: a martial arts apprentice journeys into the big world to search for an object that will grant him the next stage of wisdom. Of course, Dumbo and Wizard of Oz-style, the magical object turns out to be blarney: the hero had the power in him all the time! The kung fu neophyte is Leroy Green, aka “Bruce Leroy,” played by nineteen-year-old Taimak, who already had black belts in multiple martial arts disciplines. Leroy grew up in Harlem, but never participated much in its local culture and rich history. He instead retreated into his intense focus on becoming a kung fu master. Leroy leaves his insular world to search for a legendary master, Sum Dum Goy, hoping to achieve “The Last Dragon” level of martial arts and attain “The Glow.” 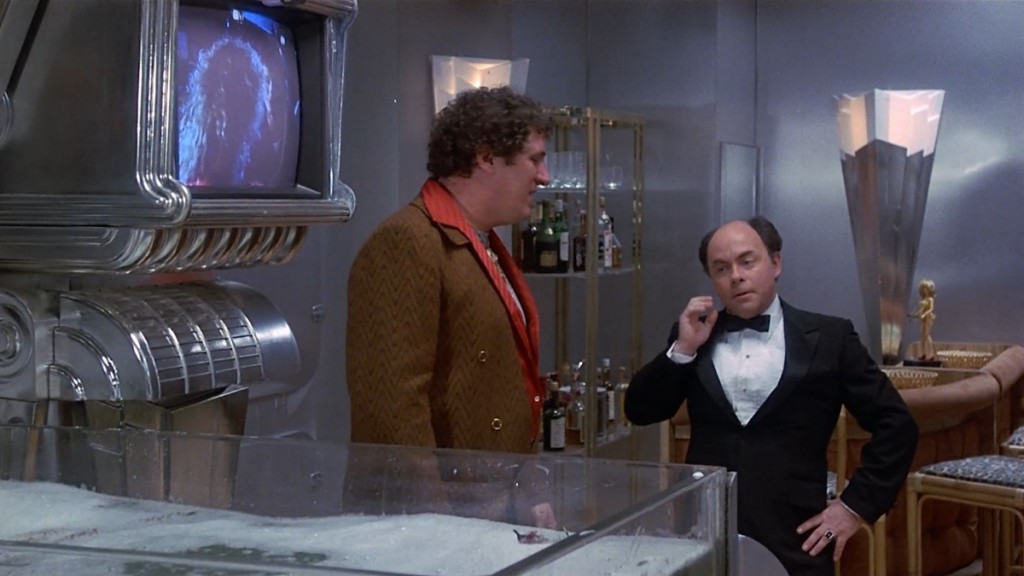 The name “Sum Dum Goy” is a tip-off that Leroy’s quest isn’t for an elusive master, but for self-realization and a reconnection to his community. He protects popular veejay Laura Charles (Vanity) from the threats of arcade mogul and Lex Luthor wannabe Eddie Arkadian (Chris Murney). Arkadian wants Laura to play his girlfriend’s awful music videos on her popular show Seventh Heaven, and he’ll go to sleazy criminal means to get his way. When Leroy interferes and starts up an awkward romance with Laura, Arkadian makes an alliance with a man who truly hates Leroy, Sho’Nuff, “The Shogun of Harlem” (Julius J. Carry III). Sho’Nuff sees himself as Harlem’s martial arts big man, and he won’t have any of this Bruce Leroy and his wise aphorism nonsense intruding into his territory. The man bought that samurai-themed Halloween costume and sports gear for a reason, and it wasn’t to be second place to some kid named Leroy.

The movie is a four-color comic book, and with the exception of Taimak, the actors delight in rolling around in all the cyan and magenta. Chris Murney acts like the villain from a Little Orphan Annie strip, and Arkadian’s protégé Angela (Broadway actress Faith Prince) is a scene-stealing airhead whose music videos are a mashup of Cyndi Lauper and Madonna as done by a tone-deaf suburban housewife. Eddie’s headquarters come complete with a big thug (great character actor Mike Starr) and water tank with a monster.

But Julius J. Carry III as Sho’Nuff owns the film. The late Carry was 6’5”, but he seems to tower two feet taller when standing next to the other actors in his samurai cosplay getup. He doesn’t speak his lines, he throws them at the other characters and the screen. If this were meant to be taken seriously, it would crash hard. But Sho’Nuff is ridiculous on purpose. Carry’s physical presence makes the character dangerous, but his performance makes Sho’Nuff into comedy every time he pops up. He makes his grand entrance into the story during the scene in the movie theater. The film on the screen stops, the house lights come up, and Sho’Nuff parades in with his entourage of people dressed worse than him. This is where a first-time viewer thinks, “Uh oh, this guy is some sort of local crime boss, and he’s going to threaten the audience or ask for extortion money.” Sho’Nuff does make a loud proclamation to the auditorium: “Am I the meanest? … Am I the prettiest? … Am I the baddest mofo low down around this town?” And then … he just goes to take his seat and watch the movie. He only wanted to make a showy entrance and brag. Immediately, you know all you need to about Sho’Nuff and the good times he’s going to deliver. He’s one of the great comedy villains. 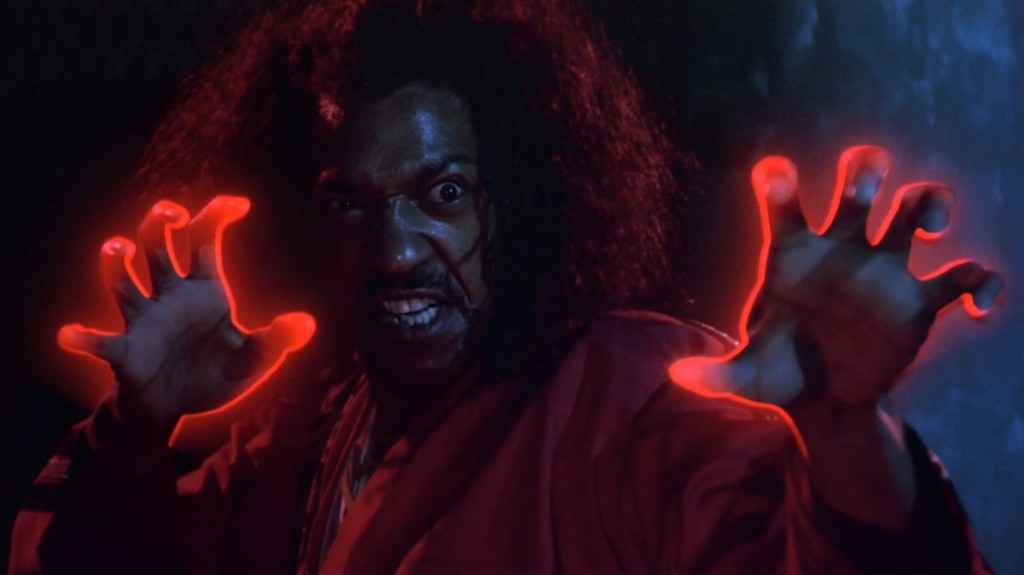 Taimak plays the straight man, but it’s the right approach. The young black belt had no acting experience at the time, but the movie uses this to its advantage. Bruce Leroy moves around Harlem in a bit of a daze (dressed in Bruce Lee’s duds from Fist of Fury) and projects a believable innocence that makes him an appealing lead for an all-ages spectacle about gaining confidence. Taimak is stunning in the fight scenes, of course. The final fight of “Glow-against-Glow” with Sho’Nuff is particularly impressive because Julius J. Carry had no martial arts training at all before the film. It’s a battle between a martial arts newcomer to acting and actor newcomer to martial arts — and it works!

The Last Dragon has numerous small pleasures tucked into it: The pride Leroy’s dad (Jim Moody) takes in running a successful black-owned pizza parlor. The reveal that Sum Dum Goy is a computer that generates fortunes for a fortune cookie company. Leroy’s martial arts student who believes that because he’s Asian he doesn’t need to learn how to fight; he can strike kung-fu poses and make weird faces and people will flee in fear. A thirteen-year-old Ernie Reyes Jr. kicking some major butt on the dance floor fight. Richie, Leroy’s little brother, sassing him for being weird. Angela finally dressing down Eddie Arkadian as an overcompensating fake. Sho’Nuff screaming “You’ll … never … use … this … foot … again!” Actually, everything Sho’Nuff says is gold: “You just get that sucker to the designated place at the designated time, and I will gladly designate his ass — for dismemberment!” I could quote Sho’Nuff all day.

The Last Dragon wasn’t a breakout hit in theaters, but it turned a profit. Its audience has continued to grow along with Big Trouble in Little China’s, and its combination of innocence and a forward-looking black superhero make it stand out today, even with (and often because of) the frontal assault of ‘80s kitsch. In a pleasant confluence of events, director Michael Schultz has returned to the black superhero business this year, helming episodes of the show Black Lightning. Mike, it’s great to have you still around.

One more from Sho’Nuff: “See, now it is mumbo-jumbo like that, and skinny little lizards like you thinking they the last dragon that gives kung fu a bad name.” 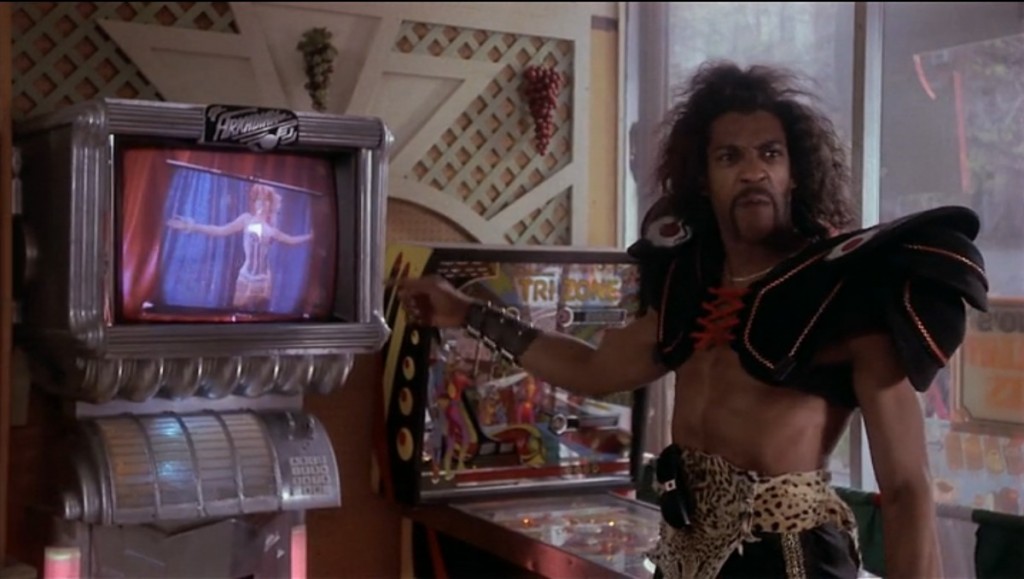 Talk about your guilty pleasures.

Love this movie. Watched both this and Big Trouble in Little China in the past month or so. I’m so glad it is getting the attention it deserves.

This was another one of many movies that was part of my 80s cultural milieu (Big Trouble in Little China, Goonies, The Adventures of Buckaroo Banzai Across the 8th Dimension, etc.)

Would you put Brother from Another Planet in the same category as The Last Dragon?