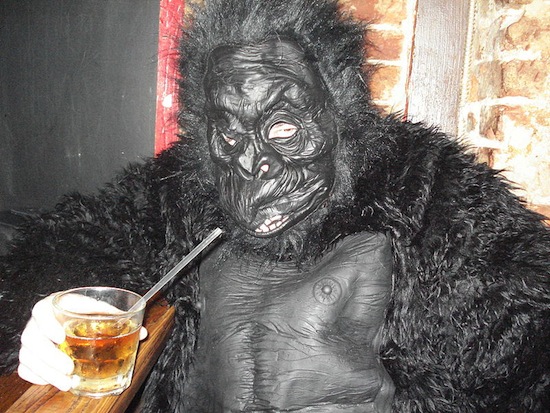 It’s January 31, and that means it’s time to celebrate one our civilization’s greatest inventions–the gorilla suit!

On this holiday, we dust off that gorilla suit hanging in our closet and don it with pride. The idea is that you should do at least one thing in your regular schedule dressed up as a gorilla. Go to the store, go bowling, have a drink at your local bar, whatever.

National Gorilla Suit Day was invented by Mad Magazine cartoonist Don Martin. But of course the roots of this cultural phenomenon go way back to the beginnings of cinema, when early directors found that a man in a gorilla suit took direction much better than an actual gorilla. 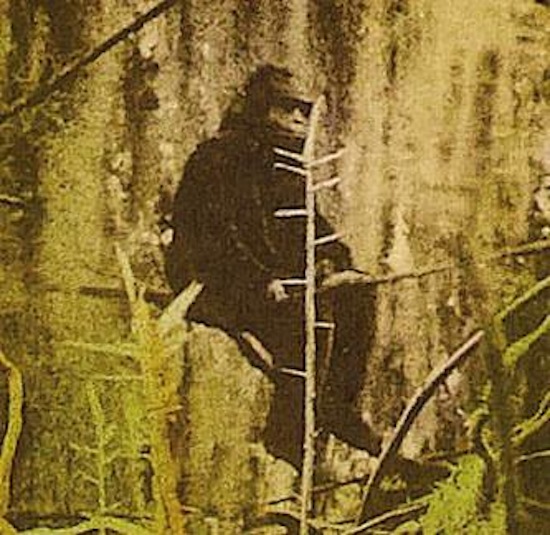 Perhaps the first appearance of a gorilla suit in a movie was the first Tarzan movie, Tarzan of the Apes, a silent feature from 1918. While this version has mostly been forgotten, it’s worth a watch by Tarzan fans because unlike many of the other films, it sticks pretty close to the original story.

Another early gorilla movie is The Savage Girl (1932), an adventure film with a heavy dose of comedy (it’s got a New York cab driving through the jungle) in which a female version of Tarzan swings through the jungle on some vines to meet two white hunters–one good, one bad. The gorilla suit doesn’t appear until the final scene, when the gorilla comes to save the girl’s virtue from the bad hunter. It’s interesting to compare this low-budget B-movie with the first appearance of Johnny Weissmuller as Tarzan that same year. That film has a gorilla suit too, worn by legendary gorilla actor Ray “Crash” Corrigan.

Gorilla pictures had somewhat of a renaissance in the 1940s and 50s. Unfortunately, this also coincided with a common subtext throughout these films in which a white women is carried off into the jungles of Africa by a big, savage gorilla who wants her for her own. The Great White Hunter must then save her. A lot of film historians see a racist subtext to this, but of course there’s a lot more overt racism in the depiction of the “natives”. 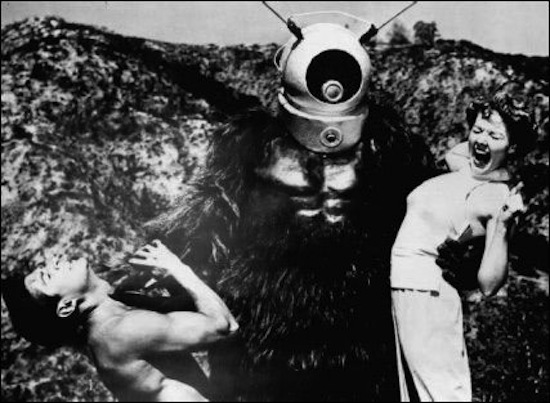 One of the worst gorilla movies has to be Nabonga (1944), produced by the Poverty Row company Producers Releasing Corporation. It is, strangely enough, one of the few from this era that turns the trope around. The white woman has lived most of her life with the gorilla and when the Great White Hunter shows up, she doesn’t want to be saved! It’s still a crap movie, however. It gets a 4.1 rating on the Internet Movie Database, and I think that’s generous. 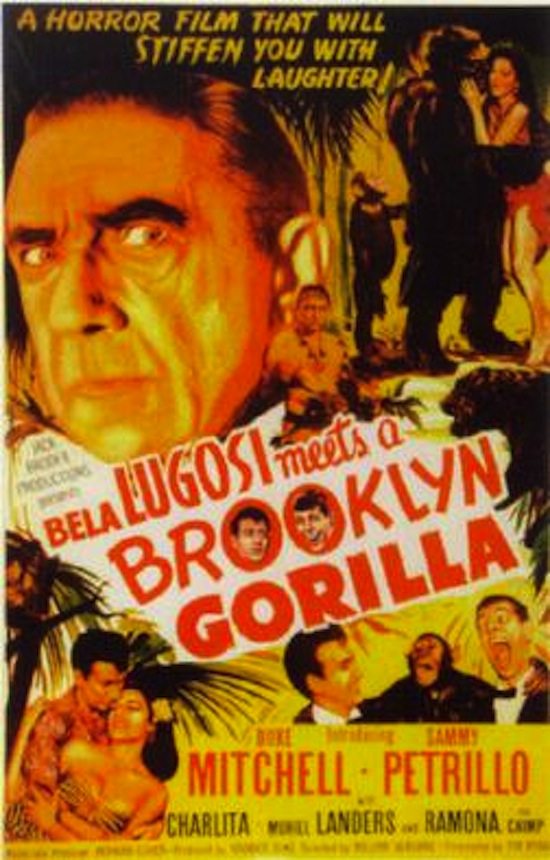 Then of course there’s Bela Lugosi Meets a Brooklyn Gorilla, made in 1952, the year before Lugosi made Glen or Glenda. Some people say that he really jumped the shark when he teamed up with Ed Wood, but this movie proves that Wood is only partially to blame for Lugosi’s descent into the dregs of Hollywood. I’m a big Lugosi fan, but this film is almost unwatchable. It’s not really Bela’s fault. The problem lies with the starring role of Sammy Petrillo, arguably the most annoying comedian ever to hit the silver screen.

So where are the good gorilla suit movies? Well, um… perhaps the readership can help? Because hey, if I’m not going to the gym in my gorilla suit today, I need to watch some gorilla movies tonight.

Perhaps I should check out the Hollywood Gorilla Men blog for some suggestions.

Not movies, but I seem to recall encountering more than one gorilla suit when I watched syndicated reruns of the Abbott & Costello TV series back in the day.

Wait… there was an Abbott & Costello TV series? When was that? *scurries to Wikipedia*

I just checked IMDB and apparently it originally aired in the early 1950s? Long, long before my time, I hasten to add …

I love the idea of gorilla suit day, but honestly if someone tried to pull that stunt in certain parts of the US, they run the risk of getting shot…

The King of the Gorilla Suits:

Carlos Cruz Gemora was born in Negros, Philippines on June 15, 1903, the youngest of nine children. He ran away from home after his father died, but his family found him and placed him in a monastery to be raised.. As a teenager, he stowed away on a ship to come to the United States, arriving in San Francisco, where he anglicized his name to Charles Gemora and found work picking fruit. He won an art contest in 1922 and used the money to make his way south to Los Angeles where he set up an easel outside Universal Studios, sketching portraits until he was noticed by the studio and hired to work as a sculpture for the 1923 Lon Chaney film The Hunchback of Notre Dame. He continued to work as a sculptor on films and in 1925, he created a ape-man costume for the film The Lost World. Two years later, he would don a gorilla suit for the first time in the short film Goose Flesh.

Due to his stature, Gemora was the right size to fit into gorilla costumes, and he specialized in making them, creating at least three different costumes over the course of his career. He appeared in 47 films, as a gorilla, or some other simian, in 44 of them. His first feature as a gorilla was in 1928 in the film The Leopard Lady. As he played more and more gorillas, Gemora would visit the San Diego zoo to study their movements and attempt to emulated them. He played the title role in the Laurel & Hardy film The Chimp and the title role in the film The Gorilla. In At the Circus he played Gibraltar and near the end of his career he appeared in Africa Screams, opposite Abbott and Costello. While working on The Monster and the Girl in 1941, Gemora suffered a heart attack. After that, he split gorilla duties with other actors handling the more strenuous parts of the role. In the 1950s, he branched out playing a Martian in War of the Worlds and an alien in I Married a Monster from Outer Space, although his last film role was a return to his roots as a Gorilla in Mardi Gras.

When Gemora wasn’t monkeying around in movies, he continued to work in the art department as a sculptor and painter, and, starting in 1931 most frequently in the make-up department. Beginning with the film Don Juan diplomático in 1931, he did makeup, eventually working on films including The Good Earth, Gunga Din, Anything Goes, The Ten Commandments, and Around the World in Eighty Days. He was working on makeup for Jack the Giant Killer on August 19, 1961 when he suffered a fatal heart attack.

He was married to Belle and they had three children, two boys and a daughter. In addition to his work in film, Gemora holds three patents, one for a sanitary pad holder, one for a combination eyebrow pencil holder and sharpener, and one for a tissue dispenser.

Quite the renaissance man! Er… ape.