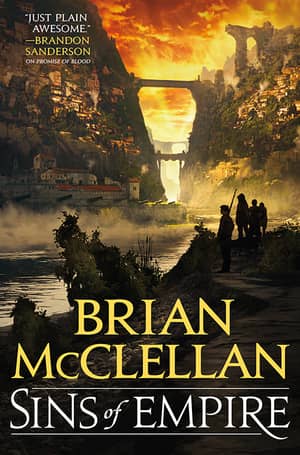 Have you ever taken a look at your pile of unread books and thought, “I feel like reading about __________,” and realized that type of book is nowhere in the ten (or maybe thirty) you have waiting? Apparently having an ongoing stack of books you intend to get to is a sign of creative intelligence (yay me!) but it doesn’t help when you have a craving for, say, an epic fantasy with great worldbuilding and even better characters, and you have nothing like that on hand.

It was that desperate hour of need that led me to my local bookstore and a copy of Sins of Empire by Brian McClellan, whom I admit to having never heard of before that day. I picked up his book on a whim because the cover art and back cover description caught my eye, and to my amazement I think it’s one of my favorite books this year.

First and foremost, I’m a sucker for dynamic and flawed characters who I want to root for, and McClellan delivers a ton of them. There’s Michel Bravis, the ambitious member of the secret police who argues with himself when he’s nervous, or Lady Vlora Flint, the mercenary commander who’s hard as steel but whose heart bleeds for the underprivileged, or Mad Ben Styke, betrayed former lancer who’s spent ten years of good behavior behind bars to protect the people who served beneath him. The best part of what McClellan does is put these characters into situation after situation that pushes them in different directions and keeps the action moving — which isn’t easy in a 640-page book. In almost every epic fantasy book I’ve read there are moments where the story slows, but Sins of Empire doesn’t have that — there’s constant movement, but consistent character development and intrigue at the same time.

Connected to that is the rich history of the world. Characters make reference to past events and histories that motivate all the action in Empire, giving the world a level of detail that amazed me. Of course, I didn’t realize that this isn’t the first time McClellan used this setting , and that there’s a separate trilogy that takes place prior to Empire, featuring some of the same characters. Oops. But that doesn’t minimize the importance of the world’s history and how McClellan filters it through the narrative.

Honestly, it’s rare these days that an epic fantasy can hold my attention for this kind of length without boring me with the usual tropes or too much description or too many sideline stories. Sins of Empire is like the best parts of an action movie and a game of Dungeons and Dragons melded together into something truly wonderful, and perfect if you’re hurting for a fantasy novel and feel like picking one up on a whim.

I miss randomly grabbing something off the shelf. I still do it for comic books, but i haven’t done that for novels in several years.

I’ve had a stack of books on my nightstand for two years now. Something else always jumps to the front of the line (comics.)