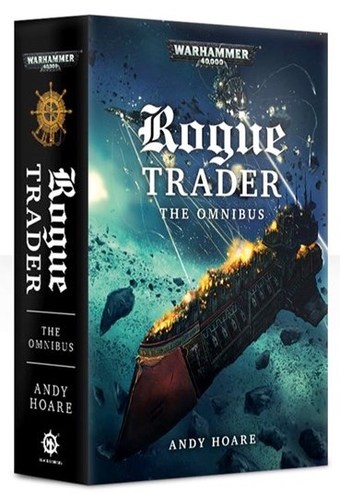 Fantasy Flight released the epic Rogue Trader role playing game in 2009. One of the early fruits of their Warhammer 40,000 license, Rogue Trader allowed players to play intrepid merchant princes buying and selling outside the legal boundaries of the Imperium. I became a fan immediately, and it quickly became my favorite science fiction RPG.

Fantasy Flight lost the Warhammer 40K license last year, and the game is now out of print. I thought that would be the end of the brand, so I was pleased to see Black Library put Rogue Trader: The Omnibus on their schedule for next month. It’s a compilation of three novels and two short stories by Andy Hoare. Rogue Star (2006) and Star of Damocles (2007) chart the fortunes of rogue trader Lucian Gerrit on the Imperium’s fringes, and Savage Scars (2011) picks up the tale as the White Scars battle the T’au on the planet Dal’yth. Rogue Trader: The Omnibus arrives in trade paperback on January 23.

Explore the stars and the farthest reaches of the galaxy with the complete Rogue Trader omnibus, containing the novels Rogue Star, Star of Damocles and Savage Scars.

Licensed by ancient charter, Rogue Traders explore the uncharted regions of the galaxy, seeking new worlds to exploit on behalf of the Imperium. The fortunes of Rogue Trader Lucian Gerrit and his family are in decline, and his inheritance amounts to little more than a pile of debt and misery. In a final, desperate gamble to restore his family’s former glory, Gerrit strikes a deal on a forgotten Imperial world in the Eastern Fringe, but his timing could not be worse. The alien tau are seeking to expand their empire across the Damocles Gulf, and soon Gerrit is caught in the middle of a clash between two mighty star-spanning empires, neither of which is willing to back down.

Rogue Trader: The Omnibus will be published by Games Workshop/Black Library on January 23, 2018. It is 800 pages, priced at $21 in trade paperback. Read more at the Black Library website.

Hmmm … My interest is definitely piqued, especially now that GW/BL eBooks are showing up in the Amazon Kindle store. I’ve always been a fan of the 40K universe, and I especially like it when they move outside of the Space Marine stuff.

When the RPG came out, it actually piqued my interest, a first for the 40K line. Never played, but, hey, interest.

What impressed me most (aside from the richness of the 40K setting, a Dark Ages universe filled with ghosts, cursed relics, and sinister aliens) was the quality of the writing. The books really are a joy to read. You can find many of them cheaply on Amazon these days (some under $10) — well worth the investment to check out the system.

For example the 3-act adventure Black Crusade: Hand of Corruption, list price $29.95, has been marked down to just $7.80.