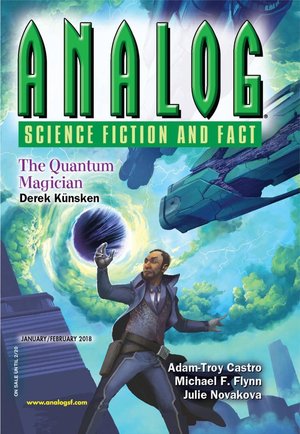 Two Black Gate writers are showcased in the newest Analog. Jeremiah Tolbert has a short story, “The Dissonant Note,” and our Saturday blogger Derek Künsken presents the first installment of his highly anticipated debut novel The Quantum Magician. This morning I read the first chapter — a fast-paced tale of an attempted con in an icy subterranean casino, with AIs, religious soldiers, and robot puppets — and was immediately hooked. It has more action and intriguing SF concepts than the vast majority of short stories I read in the last year. Here’s Derek.

In The Quantum Magician, I wanted to look at all the humanities we will create. Some new humans will help civilization, some will spiral it backwards, and some will, through no fault of their own, be really good at confidence schemes and heists. Solaris already takes a complex look at space opera futures, so it’s really exciting to work with them.

And here’s the book description, from the Solaris website.

Belisarius is a quantum man, an engineered Homo quantus who fled the powerful insight of dangerously addictive quantum senses. He found a precarious balance as a con man, but when a client offers him untold wealth to move a squadron of warships across an enemy wormhole, he must embrace his birthright to even try. In fact, the job is so big that he’ll need a crew built from all the new sub-branches of humanity. If he succeeds, he might trigger an interstellar war, but success might also point the way to the next step of Homo quantus evolution.

The Quantum Magician will be serialised in two additional installments in Analog, and arrives in trade paperback from Solaris in October.

As 2018 looms, we put a year of quality fiction behind us, while another year of stellar stories awaits ahead. So let’s get to it, shall we?

We kick off with a little bit of an experiment in our new format: a serial. Belisarius is a Homo quantus, a breed of enhanced human capable of interacting with quantum states in a way the rest of us baselines are not. But he’s been lying low, putting his gifts to use as a gambler and con man, and when someone offers him a job so big and complex that he’s the only one who might be able to pull it off, even Bel can’t be sure if is everything is what it seems. You can find some clues in the first installment of The Quantum Magician, by Derek Künsken.

Our fact article is “Hell is Other Planets,” from Julie Novakova. It’s a close look at how our conceptions of Venus over the years have matched up to the reality.

Then we check in on Daiken, Adam-Troy Castro’s hyper-lethal retired black-operative. He’s traveling with an equally dangerous companion, but as their search for their former masters brings them ever closer to finding those who once controlled them, the risks grow ever closer as well, and they cannot be held at bay forever. You’ll be shocked by “Blurred Lives.” 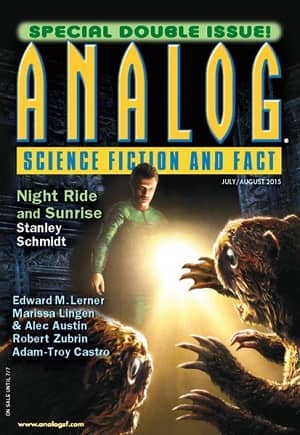 This is the third tale of Daiken by Adam-Troy Castro. The previous two were also novellas:

In an interview with Alex Punceka in Lightspeed back in July, Castro teased at least one additional Draiken tale, saying:

Already in the Analog pipeline, but not yet scheduled are the next two novella-length installments in the continuing adventures of the vengeful operative Draiken, the first of which will be called “Blurred Lives.”

Hell Is Other Planets, Julie Novakova

The cover, by Josh Meehan, illustrates The Quantum Magician.

The January/February issue is on sale until February 20.

We last covered Analog with the September/October 2017 issue. See all our Analog coverage here.

Our December Magazine Rack is here. See all of our recent fantasy magazine coverage here.