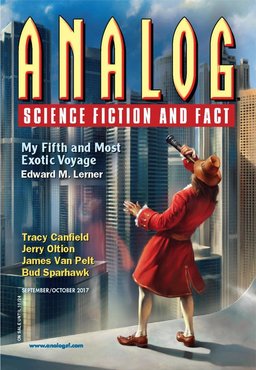 The September/October Analog has a diverse mix of tales, of time travel, uplifted animals, ghostmail, siege engines on Mars, cryo-prisons, space elevators, crash landings on hostile worlds, mysterious alien invaders, and Norman Spinrad’s tale of the Order of the Galactic Eye. Here’s Nicky Magas at Tangent Online to give us the highlights.

An exciting new world that is hostile to technology awaits Mbasi in “Orphans” by Craig DeLancey. No probes sent to the planet teeming with vegetation have survived through to their full life expectancy. It’s up to Mbasi and the rest of the research crew to figure out why. But when an unexplainable accident forces them into an emergency crash landing from their planned orbit, Mbasi finds herself a little closer to the conundrum than she first anticipated. To make matters worse, whatever has been destroying their probes is making short work of their ship as well.

The mystery in “Orphans” is what truly makes this story shine. The sense of urgency DeLancey puts into every word is palpable to the reader, making every decision seem like life or death. DeLancey cultivates a deep curiosity in readers, and though he peppers the narrative with speculation between his characters, the open ended nature of the conclusion leaves readers on the edge of the cliff of what is knowable, both satisfied and deeply wanting more.

In “The Old Man” by Rich Larsen, Ezekiel wants nothing more than to kill his father and have him know who did it. Lucky for him the Old Man escaped his cryo-prison. Luckier still, the government thawed Zeke for the task of taking him out. The Old Man has much to atone for and Zeke means to see the debt settled down to the last drop of blood.

Larson tells a fascinating story of revenge and humanity in “The Old Man.” As the narrative unravels itself in a non-linear way set to the backdrop of the swampy bayou, readers find their sympathies torn between politics, family, and human rights in a technologically advanced future. There are layers to this story that make it exquisitely complex and an ethically thoughtful read. Readers expecting a story whirling with technology might be surprised by how intricately and tragically organic it is, however this does not detract from the brilliant piece of futuristic science fiction that it is.

Our lead story for our September/October issue presents a conundrum: a notable figure is seemingly plucked out of the past, but his presence in the future isn’t just unlikely, it’s impossible… or is it? Find out in “My Fifth and Most Exotic Voyage,” by Edward M. Lerner.

In our fact article for the issue, Richard A. Lovett checks the progress of “The Quest for the 2:00 Marathon.” More than just a look at the evolution of sports, it’s biology, chemistry, and no less than a matter of how far we can push the human form. Just what might we be capable of under the right circumstances? This is one answer to that question.

Then misfortune befalls a group of scientists including some Uplifted animals in “i know my own, and my own know me,” by Tracy Canfield; letters from the Front and quantum warfare mingle in Eric Del Carlo’s “Ghostmail”; Marie Vibbert builds “The First Trebuchet on Mars”; Simon Kewin goes “Climbing Olympus”; Rich Larson brings us the most personal possible tale of revenge in “The Old Man”; very unscientific methods inspired by real world events leave just “The Absence” by Robert R. Chase; even the truly alien may speak in ways we understand, in Tom Jolly’s “The Mathematician”; A Close Encounter winds up being regretted by both parties in “Abductive Reasoning,” by Christopher L. Bennett; there’s a seasonal Probability Zero from Michael F. Flynn, and more, from Craig DeLancey, Lettie Prell, Jerry Oltion, Christina de la Rocha, James Van Pelt, Stanley Schmidt, Norman Spinrad, and Bud Sparhawk.

“My Fifth and Most Exotic Voyage” by Edward M. Lerner
“i know my own & my own know me” by Tracy Canfield
“The Old Man” by Rich Larsen
“Orphans” by Craig DeLancey
“The Sword of Damocles” by Norman Spinrad

The Quest for the 2:00 Marathon, Richard A. Lovett

The September/October issue is on sale until October 24.

We last covered Analog with the July/August 2017 issue. See all our Analog coverage here.

Our late September Magazine Rack is here. See all of our recent fantasy magazine coverage here.