I’m back from my failed Kickstarter, and I’ll be looking for more books to review soon. If you have any, send them my way. 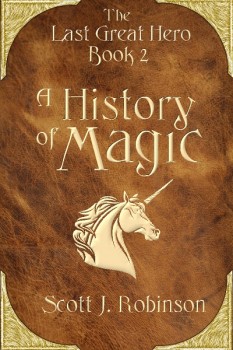 A History of Magic is the second book in Scott Robinson’s series about Rawk, the last great hero. I reviewed the first novel, The Age of Heroes, two years ago here at Black Gate.

Rawk is retired, but that doesn’t stop the exots–exotic monsters from other worlds–from randomly appearing in his city of Katamood. Technically, this should be his friend Weaver’s problem, as he’s the prince of the city, but the city guard that Weaver employs can’t be everywhere at once. And if a monster appears right in front of Rawk, he has to fight it. It’s expected, to judge from the crowds that materialize whenever that happens. But Rawk is getting slower, and he can’t save everyone, not even his audience, which doesn’t always have the good sense to keep its distance.

New heroes have been showing up from all over the world to fight the monsters. But heroes are lazy sorts, and they tend to hang out in taverns waiting for word of the monsters to come to them, and only then head out to kill the beast and collect the bounty. And very few of them have any interest in finding out where the monsters are coming from and stopping it–that would cause the bounties to dry up quick.

It must be caused by sorcerers, to judge from the magical portals producing the monsters. Weaver’s solution would be to send his guards from door-to-door hunting down sorcerers–real or imagined–but Rawk would rather avoid that. So he recruits Sylvia, half-elven sorceress and former enemy, current healer, to help him out. Together, they track down various sorcerers who have little real magic between them, trying to discover who’s behind the exots. Clearly, none of these sorcerers could light a candle with magic on their own, but if enough of them worked together . . .

Along the way, Rawk loves and loses, makes some shrewd business decisions, hires some talented musicians and some heroes he sets to patrolling, and sets out changing Katamood attitudes toward dwarves, elves, and fermi through sheer bull-headedness.

The Rawk in the second book is wiser than his previous incarnation. He’s grown. For one, he has retired, or protests loudly that he has despite the fact that he still doesn’t hesitate to throw himself into danger and take on tasks that really should be someone else’s job. He has a real relationship rather than a one-time fling, with a woman who’s close to his own age, even if he’s not as happy as he pretends. He’s also grown significantly less prejudiced. He develops real friendships with dwarves, elves, and fermi, and begins to appreciate their loyalty and talent, and the difficulties they face from the humans in Katamood.

While I appreciated the improvement in Rawk’s attitude, at times the story was heavy-handed when dealing with prejudice: the non-humans face significant bigotry for no discernable reason, yet endure it with near saintly patience.  I’d have liked to have seen some cultural clashes and misunderstandings, some genuine conflicts to give me insight into the human and non-human attitudes.

While the book is generally well-written, it could have used another copy-editing pass or three. There were more typos and grammatical errors than I’d like to see, and it was significant enough that it threw me out of the story more than once.

But when it worked, the book was magic. It was one of my favorite books this year. Rawk proved, once again, to be a flawed but likeable hero. An amusingly fallible, but not ridiculous, one, who tries his best in a world that’s trying, and failing, not to need him anymore.

A History of Magic is available at Amazon for $3.99.

Thanks for the review, Donald. I’m glad you enjoyed the story.

I’m pretty sure I have given the story at least one more read through since you received your version, but I will go through again, just in case. It’s a bit embarrassing that something as (relatively) easy to fix as typos could affect the story that much.

Sorry about the failed Kickstarter, Donald! That must be especially crushing, since it got so close.

It’s disappointing, but it also answered the question we had: was there enough interest to make doing another anthology worthwhile? For now, at least, it looks like the answer is no.

On to plan B. Hopefully we’ll be ready to announce that in another week or two.