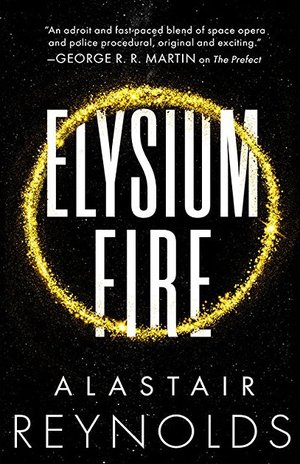 A decade later Reynolds has written a sequel, in which Dreyfuss finds himself caught in a web of murderers, secret cultists, tampered memories, and unthinkable power. It arrives in paperback from Orion next month.

But even utopia needs a police force. For the citizens of the Glitter Band that organization is Panoply, and the prefects are its operatives.

Prefect Tom Dreyfus has a new emergency on his hands. Across the habitats and their hundred million citizens, people are dying suddenly and randomly, victims of a bizarre and unprecedented malfunction of their neural implants. And these “melters” leave no clues behind as to the cause of their deaths…

As panic rises in the populace, a charismatic figure is sowing insurrection, convincing a small but growing number of habitats to break away from the Glitter Band and form their own independent colonies.

Elysium Fire is Book 2 of 3 in the Prefect Dreyfus Emergency series. Our most recent coverage of Reynolds includes Brandon Crilly’s review of Revenger (which won the 2017 Locus Award for Best Young Adult Book), and a look at The Medusa Chronicles, co-authored with Stephen Baxter. Brit Hvide at Orbit shares this take on the cover art:

Peer into the darkness! Gaze upon the future! And admire that sweet, sweet new cover for Alastair Reynolds’ latest space opera, Elysium Fire! That gold band you see on the cover? Nope, it’s not one of Jupiter’s rings, fancy space debris, or a futuristic engagement ring. It’s the Glitter Band, the setting for Reynolds’s latest adventure: ten thousand city-state habitats orbiting the planet Yellowstone, forming a near-perfect democratic human paradise. How’s that for scale?