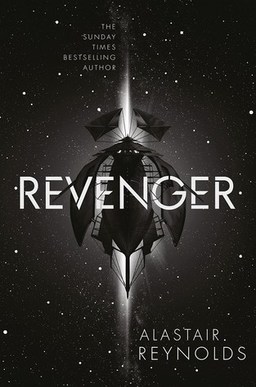 Alastair Reynolds is one of the few authors I’ve read who manages to draw me into a standalone novel, immerse me with compelling characters and a complex world, and leave me begging for a sequel by the time I read the last page. He accomplished it with Terminal World. Then he did it again with House of Suns. And with my latest Reynolds read, Revenger, I sat back again and demanded out loud, “But wait – what happens next?!”

No one should be surprised when I say that Reynolds is a masterful storyteller. If you’re a fan of science fiction, you’ve probably at least heard his name – and if you haven’t, go pick up one of his books right now. Probably the best part about his writing is that it’s very much hard science fiction, but isn’t overly detailed or cumbersome the way I find a lot of hard SF writers to be (I lean way more toward soft SF and fantasy).

Reynolds’ work is always fast-paced and interesting, weaving the detailed science with just enough of the fantastic to add that sense of wonder and a perfect balance of action and character work. Revenger, for example, has the pacing of Firefly or Star Wars, so that even as he’s explaining the steampunkiness (is that a word?) of the starships and personal technology in the novel, you’re never mired in an info-dump or bored by too much scientific description, just to understand how everything works.

Revenger is particularly good because it’s a very human story: it focuses on two sisters who want to escape their homeworld and sign on with a starship crew not for pure escapism like Luke Skywalker, but specifically to earn money to help their father’s struggling business. What begins as a story of adventure and wild-eyed wonder as these sisters get to know their very first crew becomes a dark and harrowing tale almost immediately, as Reynolds takes his protagonists through multiple twists and unexpected locales.

I was convinced about halfway not only that I had no idea what was going to happen next, but that I couldn’t trust anyone in the story – but at the same time I wanted to trust them, because I wanted to believe that these were all decent people who wouldn’t screw over Revenger’s narrator. Add to that several layers of peripheral mystery that Reynolds manages to satisfy, and the result is what I consider to be this author’s best work to date.

That said, I have no doubt that the next Alastair Reynolds novel I read will be even better. This is an individual who continually ups the ante in everything he writes, which is even more amazing considering every novel is so detailed in its construction and so different from everything before it. There is no way to predict what Reynolds’ next novel will be – but to be honest, that’s part of the fun. And I know I won’t be disappointed.

Revenger was one of those books that was aimed directly at me with a laser-like focus — impossibly far-future quasi-Victorian solar sailing ships in a heavily de- and re-constructed solar system? With robots and space pirates and weird alien remnant tech? Sign me up!!!

I find it strange that this book is considered YA by the publisher (and just won Locus Award for Best Young Adult Book).

Is that your take as well?

I think it’s borderline YA — the main character is relatively young, and although it’s really dark and some horrible things happen, they’re described in a relatively … YA-friendly? way.

And the publisher wants it shelved in the YA section in order to try to get some of that sweet, sweet YA market share. [he said, cynically]

With all discretion to the publisher (and presumably Mr. Reynolds, as well) this didn’t read to me like YA. Not just because it’s darker, but because there’s a sophistication to Reynolds’ writing that I think is geared for adults. That said, I had the same opinion about Leah Bobet’s AN INHERITANCE OF ASHES, which I reviewed last year, before I found out it’s universally considered YA and has also won YA awards. So it could be my metric is off 🙂

I enjoyed this story quite a bit, though the changes that took place in some of the characters were profoundly disturbing. It will be interesting to see what happens in the sequels.

This would be a great universe to set a tabletop roleplaying campaign in. There are all sorts of opportunities for adventure.