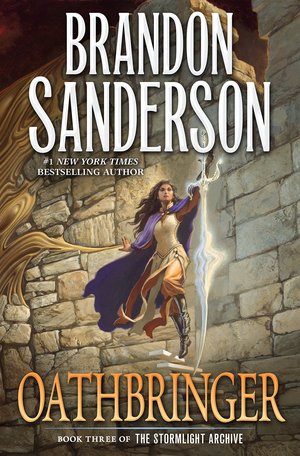 Brandon Sanderson is one of the most prolific writers in the genre. By any measure, he’s certainly one of the hardest working. Back in 2015 I estimated that he was producing, on average, 1,270 pages per year (not counting short stories and the like). His first novel of 2017, Oathbringer, the third novel in The Stormlight Archive, weighs in at a whopping 1,248 pages — and still manages to bring down his average.

Oathbringer is the sequel to the #1 New York Times bestselling The Way of Kings (2011) and Words of Radiance (2014), both of which were over 1,000 pages in hardcover. The series is projected to be 10 volumes, over 10,000 pages, about ten times the length of The Lord of the Rings. Get a cozy reading nook for this one, you’re going to need it.

In Oathbringer, the third volume of the New York Times bestselling Stormlight Archive, humanity faces a new Desolation with the return of the Voidbringers, a foe with numbers as great as their thirst for vengeance.

Dalinar Kholin’s Alethi armies won a fleeting victory at a terrible cost: The enemy Parshendi summoned the violent Everstorm, which now sweeps the world with destruction, and in its passing awakens the once peaceful and subservient parshmen to the horror of their millennia-long enslavement by humans. While on a desperate flight to warn his family of the threat, Kaladin Stormblessed must come to grips with the fact that the newly kindled anger of the parshmen may be wholly justified.

Nestled in the mountains high above the storms, in the tower city of Urithiru, Shallan Davar investigates the wonders of the ancient stronghold of the Knights Radiant and unearths dark secrets lurking in its depths. And Dalinar realizes that his holy mission to unite his homeland of Alethkar was too narrow in scope. Unless all the nations of Roshar can put aside Dalinar’s blood-soaked past and stand together ― and unless Dalinar himself can confront that past―even the restoration of the Knights Radiant will not prevent the end of civilization.

Nice to see Michael Whelan do the cover art. The wraparound cover is quite striking; here’s a look at the entire piece.

First, here’s Whelan on the scene.

We’re centered on a scene where Jasnah confronts the invaders. A giant has smashed a breach in the city wall, and Jasnah is called upon to restore it.

Read his complete comments at the Tor.com cover reveal. Here’s the final piece. 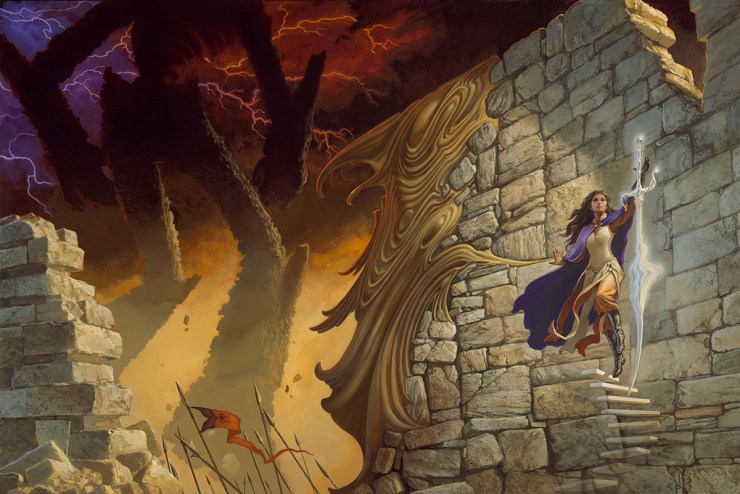 And here’s the gorgeous endpapers for the hardcover. 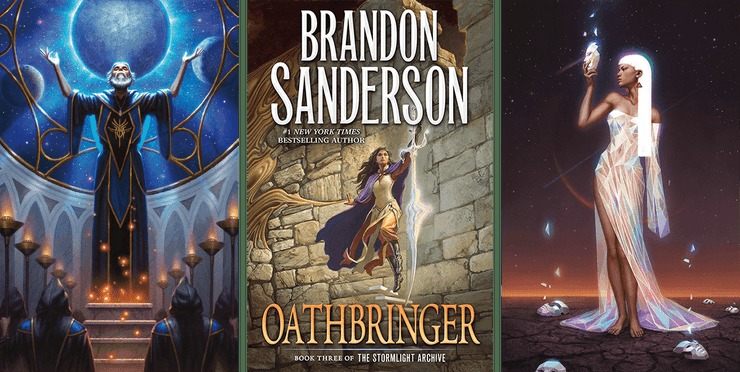 Oathbringer was published by Tor Books on November 14, 2017. It is 1,248 pages, priced at $34.99 in hardcover and $16.99 for the digital edition. The cover is by Michael Whelan. Tor.com serialized the entire book online here.

Read all our recent coverage of Brandon Sanderson, including Brandon Crilly’s review of Calamity and Charlene Brusso’s review of Warbreaker, here.

Apparently this one does!

By the way Bob… I’m expecting a review by December. 🙂