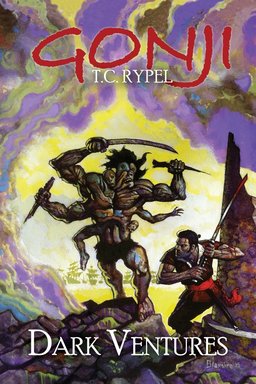 Aside from his own terrific swords & sorcery tales, the thing I’m most grateful to Joe Bonadonna for is hipping me to the Gonji stories of T.C. Rypel. For those unfamiliar with him, Gonji is a half Viking, half Japanese warrior, cast out of Japan and in search of his destiny across a monster- and sorcery-ravaged Europe. His epic struggle against malign magical powers are told in a series of five novels: Red Blade from the East (2012), The Soul Within the Steel (2013), Deathwind of Vedun (2013), Fortress of Lost Worlds (2014), and A Hungering of Wolves (2014). The novels (reviewed by me at the links) are dense works of remarkable storytelling, filled with deeply memorable characters and complex worldbuilding. Now, appearing for the first time, is a collection of shorter works called Dark Ventures (2017).

Before I start telling you about the book, let me be up front: I consider Ted Rypel a friend, and I was privileged to read a pre-publication version of the new book’s central novella, “Dark Venture.” Ted loved my description of the story so much he used it as a blurb on the back cover:

People will not know what hit them when they read “Dark Venture.” It’s one of the most exciting (and gruesomely bonkers) swords & sorcery stories I’ve had the pleasure of reading.

I meant those words when I first wrote them a couple of years ago, and I stand by them today.

Dark Ventures opens with the short story “Reflections in Ice.” It’s an expanded and revised version of the first chapter of the novel Fortress of Lost Worlds. In it, Gonji and his companions, having survived the events of the first three books, are making their way across the Pyrenees Mountains in response to a summons for their aid. Slowly they are being killed, stalked by unseen and supernatural hunters:

The ghostly army comes again the next night, and the next, pursuing when we flee, retreating when we advance. Two more men are savagely slain by unerring bowshot, despite all caution and hastily fashioned defensive shielding. To wheel and engage them is to encounter mocking laughter from that effulgent bank of nothingness they inhabit. To run or take a stand is to be subjected to more casual slaughter, as if we are mere game; more sudden chilling eruptions of screaming and gouting blood, under the assassins’ uncanny aim.

As his party is whittled down to fewer and fewer members, Gonji is forced higher and higher into the mountains in search of refuge, but finding only more horrors. “Reflections” is a dark tale that is suffused with a sense of impending death, and becomes increasingly despair-filled and claustrophobic with each step forward.

The novella “Dark Venture” introduces Gonji as a young man, just after he’s fled from Japan aboard the Dark Venture, a sailing ship whose crew and captain are of questionable morals. The story begins in the middle of an attempt on Gonji’s life by the ship’s captain during a mutiny. At the same time the ship, blanketed by a weird fog, has become stuck two hundred miles off the coast of Africa, where no known reef or island exists. As Gonji and the captain realize that what holds the ship fast is unnatural, a truce is declared.

The ship was not nestled on rocky shoals or narrows or sandy shore. She was seized in the fastness of a sprawling tangle of wrecked vessels of rotting wood and rusting iron, some familiar, some like nothing any of them had ever seen. A graveyard of seagoing vessels, some upright, some capsized, others propped aslant — like paralyzed flotsam in the throes of screaming last submersion — as was the Dark Venture. But all were of indeterminate origin and vintage, save for some few which had been devoured by this sorcerous mooring recently enough to still bear the ghastly skeletons of crewmen dead in their entangled riggings, forests of masts, and cold, forbidding decks. 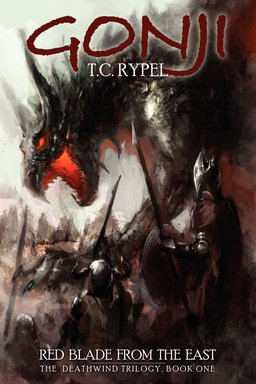 Whereas the Gonji novels are as much concerned with Gonji’s inner workings and his struggle to determine his place in the world as they are with battles against monsters and sorcery, “Dark Venture” is relentless pulp adventure. From the opening sentence, the story moves like a storm of lightning bolts streaking out of the sky, leaving smoking ruins and body parts wherever they land. It’s a nightmarish phatasmagoria, with more blood, gore, and demonic slime per page in “Dark Venture” than seems possible.

Soon Gonji and the crew are under attack from razor-edged flying creatures. The first evidence of this assault comes when

The confused scream came from halfway up the mainmast. It pierced the air as the rain of blood preceded the riven halves of a body — sliced two-thirds through at the ribcage — that pounded the deck amidst bellowing, tripping crewmen.

Things only get bloodier and more terrifying for the crew from there. Soon, the very sea appears to come alive, propelled by a ferocious hunger:

They all stared in disbelief, cursing or stammering prayers. De Groot leaned over the rail for a bolder look. He froze in terror as a twenty-foot column of the waxy slime exploded out of the rippling surface and loomed over him a glowering instant. Its maw spread, widened…

De Groot fell on his backside and frantically kicked away along the deck. The flaring slime funnel slammed down on his legs, engulfing them and suctioning the man inside its mass, up to his loins.

The story isn’t confined to the deck of the imprisoned Dark Venture. Seeing a distant, forested island with strange ruins, Gonji determines to explore it. The mysteries of the attempt on Gonji’s life as well as the ship’s predicament are revealed in splendid, and gory, fashion. Never once does the tension let up. It’s actually fascinating to watch an author given to complicated scene-setting and atmosphere-building give himself over entirely, and in such masterly fashion, to pure sword-swinging action.

“Born of Flame and Steel,” the final story in Dark Ventures, is really only a teaser for Rypel’s novel-in-progress. The chapter brings the reader back to a time before Gonji’s birth, when his mother, Hel, a pagan Viking shieldmaiden, is stranded on Japan. There she meets the young lord, Sabatake Todohiro-no-Sadowara. Together they experience the start of an extraordinary event that changes the landscape of Japan and unleashes titanic creatures. Creatures that are, at best, indifferent to humans.

Mouths agape, they looked up, and up, and still upward, higher…seemingly unable to surmount its top with human vision. Todo himself felt a wave of vertigo. He stayed himself before he might crane his neck backward far enough to balance and crash back, as others did, rolling in the waves the incredible giant’s progress created when it touched down into the flooded village.

“Gods of our fathers,” the snaggle-toothed samurai Sugi Eiji breathed.

Yep, kaiju meets swords & sorcery in 1590s Japan. If that doesn’t meet your standard of awesome, well, all I can do is shake my head. 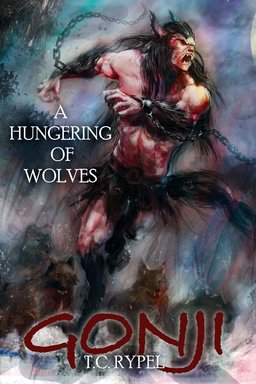 “Born of Flame and Steel,” despite its tremendous giant monster and total destruction quotient, is more in keeping with the Gonji novels than “Dark Venture.” Much time is given to Gonji’s eventual father fighting to fulfill his duties to his family as well as his subjects and himself. Hel, too, is someone who must find a path to understanding — in her case an alien culture. More than “Reflections in Ice” or “Dark Venture,” this story provides a sense of how the novels read.

In addition to the three stories, Dark Ventures includes notes and comments by Rypel about Gonji and the universe he has created for him. He also provides an extensive history of how the tales contained in the collection came to be. It’s a lesson in the vagaries of publishing short fiction in this day and age.

Rypel sees the new collection as an introduction to his work. It seems a sensible idea. The three very different types of tales it contains will give any reader unfamiliar with Gonji’s adventures an excellent sense of how, and how well, Rypel spins a yarn. More importantly, though, they’re simply damn great stories that no self-respecting S&S fan should miss out on.

I’ve gone on at times about the dearth of “real” swords & sorcery. It’s been pushed aside for the overly grim and cynical. Heroes are too often missing, replaced by blackguards of not simply suspect ethics, but absent ones. Those concerns are assuredly not ones I have about Rypel’s stories. Gonji, bitter as he can be, willful as he can be, is never unaware of or unconcerned with the consequences of his actions. In true heroic form, he is often willing to take on the burden of those consequences in order to do what must be done. He is never perfect, but neither is he despicable or totally self-serving. He is a complicated hero for complicated times.

There is no reason that Gonji’s song isn’t sung far and wide alongside Imaro’s, Kane’s, and all those mighty-thewed heroes conjured up by Robert E. Howard all those years ago. If you have not experienced Rypel’s writing before today, snag yourself a copy of Dark Ventures. If you are in search of dark adventure and mighty deeds in the face of mighty enemies, you will not be disappointed.

P.S.  If you don’t want to take just my word for it, read Joe Bonadonna’s review of Dark Ventures HERE and his interview with T.C. Rypel HERE.

Thank you for the honorable mention, Fletcher. I am always happy to point people in the direction of Gonji, and I’m glad you became of fan of Ted’s character and his novels. As I’m sure you’ll agree — the publication of Dark Ventures, and the new editions of the original, 5-book series from the 1980s are a cause for celebration. Ted deserves greater and wider recognition for what he accomplished, and for his contribution to Heroic Fantasy, and Sword and Sorcery. This is a great review and article, and I’ll be sharing it around.

Fletcher, that is without a doubt the finest single-book review I’ve had. Thank you so much for the superb notice!

You have a knack for cleaving to the very heart of a story or book and laying bare its salient points. There’s always so much to wrangle out of the myriad details of a book; so many choices to make over what to cite, in a short, controlled space, in order to convey the value of a written piece, for both entertainment and literary considerations.

Nobody distills the experience of a book down to its essence better than you.

I’m honored to read this review. This is one of those unexpected rewards, after the fact, that keep giving, that keep a writer pushing forward in the hopes of more such satisfying reader connection.

Between you and my talented and enthusiastic colleague Joe Bonadonna, I can conceive of no better champions for the GONJI series.

Well, I’m embarrassed to say I have not read all the Gonji novels yet, although I have them all. But I don’t have this one yet, and it appears it doesn’t matter if I buy it today and start it tonight, as Ted himself says this is an excellent place to start anyway. I am so happy to see honest to goodness, for real S&S is alive and well. Thanks for the review Fletcher, I’ll be nabbing this collection asap!