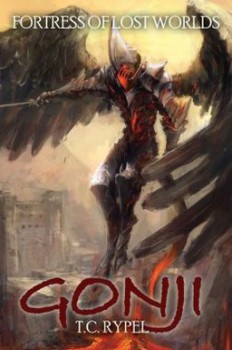 Back in January, I reviewed the first three books of T. C. Rypel’s Gonji series. Though thirty-odd years old, the books are exemplars of what heroic fantasy should be: exciting, wildly inventive, well-written, and — above all — starring a heroic protagonist. Exiled half-caste samurai Gonji Sabatake, try as he might, is unable to avoid fighting evil or behaving courageously. This stuff is why I still read S&S.

While the first three books (actually, one big book chopped into three parts by the original publisher, Zebra) are a complete story, they are also the introduction to a much wider and wilder tale. Gonji’s adventures start anew in Fortress of Lost Worlds (1985), republished this past May by Wildside Press. The fifth book, A Hungering of Wolves, should be rereleased pretty soon by Wildside as well.

At the end of the previous book, Deathwind of Vedun, Gonji left his surviving companions in order to pursue the werewolf, Simon Sardonis. He had been told years before by a Shinto priest that his destiny lay with something or someone called the Deathwind, which he discovered to be Simon. But driven by his own fears and burdens, Simon wants little to do with the Easterner and cares even less for their supposed entwined fate, so he keeps moving to prevent Gonji from finding him.

Fortress of Lost Worlds’ main story picks up two years into Gonji’s trek to find Simon. He and his party of soldiers have been savaged and chased to the feet of the Pyrenees by an unknown band he calls the Dark Company. As his last companion is lost in the frigid night, the samurai makes his escape into caverns in the mountainside. While the caves possess magical properties that both warm the nearly frozen warrior and his horse and fill their bellies, they turn out also to have occupants: ogres.

That sets the stage for Gonji’s monster-filled journey from the mountains to the town of Barbaso. He’d been warned that evil was loose in the valley, but having decided to travel to Toledo to settle an old debt, the straightest route lay through the valley, and Barbaso.

Riding along a snow covered trail through a hollow, Gonji is surprised by a demon:

Stubby arms and legs jutted comically from a body the size of a coach. Its head was as round as its body, jammed atop plump shoulders with economy  —  no space wasted on a neck. The head was hairless; the ears, beet red and pointed like the leaves of a lilac; and the face was dominated by that elastic mouth, as supple as a snake. Its nose was a tiny scallop between two beady yellow eyes which Gonji could not help comparing to his own in their angularity. 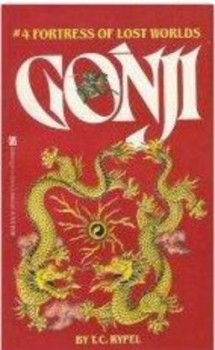 At the same time we are introduced to other players in the great game into which Gonji is reluctantly being drawn. In the town of Barbaso Captain Salguero — sent under royal orders to drive out the sorceror Domingo Negro, said to be the root of the evil in the valley — struggles to maintain discipline among his men. Monstrous beings have been harassing the citizens of Barbaso as well as anyone passing through the valley and Salguero and his men have proven powerless in their defense. Discontent and fear have paralyzed the soldiers and officers to the point where they sit practically awaiting death.

In Toledo, the Grand Inquisitor, Bishop Izquierdo, meets Anton Balaerik who claims to be fresh from the Vatican and possessed of great authority with the pope’s imprimatur. Unable to speak the name of Christ and belonging to no order the Bishop recognizes, it would seem there is something off about him. Still, he does bear the papal seal, so when he says he has come to Toledo specifically to ensure the capture of Gonji, Izquierdo agrees to bring the power of the Inquisition to bear on the samurai.

Salguero and Gonji are friends from fifteen years earlier when they served the mighty King Philip II. Though many have turned against the warrior during those years, the captain still holds him in high regard. Gonji helps his old comrade-in-arms restore order to the troops and ventures off with them to find the wizard. The wizard is not what anyone expects. which leads to a parley inside his keep. Domingo Negro’s castle is a place of strange dimensions where soldiers move far more quickly than seems possible  — distance is often illusory and doorways don’t just lead to the next room.

Gonji learns something hinted at in the earlier books: Earth is one of many concentric, interconnected worlds. Various places, like Domingo’s keep, serve as anchors and gates between them. At one time all men had the knowledge to traverse the worlds but now they have lost the power.

The witch mumbled in a low voice and performed a series of hand manipulations, working at objects in the air visible only to her. Beside the intricate display, another began to appear, its twin. But now on this new one, each of the delicate spheres began to peel open, to flatten into a plane figure, beginning with the outermost and continuing, each in turn, until the figure became a fanned-out conjunction of transparent maps, all rotating on the same axis. The perpetually moving figure came alive with scintillas, pinpoints of white light, where the turning planes touched one another at various points. The centermost featured the greatest display of lights, and as the guests watched, they noted that some of the lights were not stationary. These flitted from one map to another and still another, leaving traceries of light like shooting stars behind them.

“Corridors and gateways, you see,” she explained, “from one sphere to another.

The evil forces now materializing in Europe are only the vanguard of great powers that hope to seize control of the many worlds. For reasons unknown, Gonji is destined to play a great part in the struggle against these malign forces. 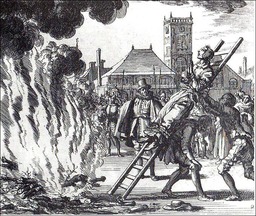 Upon their return to Barbaso, Gonji and Salguero’s men are taken prisoner. Gonji is swiftly turned over to the Inquisition. As much as Rypel writes awesome, explosive technicolor action scenes that would bankrupt a Hollywood production, he also excels at the character-driven moments. In my previous review, I noted that much of all three books is taken up with conversation. Even minor characters got a chance to take the stage and put a little flesh on their bones. When the time came for them to do something, be it act heroically or die, I didn’t feel like I was suddenly expected to care about some random character, recently introduced. Rypel proves himself again during the long duration of Gonji’s imprisonment.

During Gonji’s stay in the dungeons we learn how he disciplines himself to face the torture and starvation that become his regimen. We also see his mask of stoicism slip a little when he encounters a fellow prisoner, a syphilitic woman accused of witchcraft, imprisoned in the cell opposite his.

Characters are fleshed out in the story so when the time comes for them to act it make sense. Not everyone’s motive is explicit, particularly the menacing Anton Balaerik’s. Rypel is a master at leaking only bits of information here and there that, taken together at the right time, explain volumes about a character’s actions. Done right, the mystery surrounding someone’s motive is quite satisfying at its denouement.

Rypel also seems to possess an ability to gauge the attention span of his reader. The misery of this grim section, while leavened with debates between various churchmen and nobles over the samurai’s fate, is alleviated none too soon by a fiery series of events.

As in the epic battle finale of Deathwind of Vedun, and nearly all of the gore-soaked (and sadly, unpublished) novella Dark Venture, everything gets ratcheted up in the last part of Fortress of Lost Worlds. There are sea battles, werewolf battles (lots of them), and desert battles, all during the search for the titular fortress. To top it off there is a stunning fight inside a fortress that might have been designed by M. C. Escher, or somebody who wrote modules for Judges Guild. Rypel brings it all home in an ending that is both satisfying and an enticing setup for the next book.

I must again thank Joe Bonadonna for bringing Gonji and T. C. Rypel to my attention in his post How I Met Your Cimmerian (and other Barbarian Swordsmen). That Rypel’s books have been out of print for so long is a shame. It reminds me of what I set out to do on my blog and here at Black Gate: help readers discover the great back catalogue of S&S that’s been ungraciously forgotten. In a day when cynicism appears to be de rigueur, heroism is downplayed, and the pulp roots of the genre are seen as a little unseemly, there are books like Fortress of Lost Worlds to turn to.

And that’s all for the next few weeks. I’m taking a break and will be back in late August. Have a great rest of the summer!