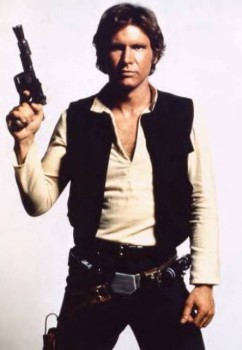 Last week, I made the prediction that Han Solo will die in the new Star Wars film. I have no evidence; it’s just a theory based on a confluence of random speculations and gut instinct. Here I’ll lay out, in no particular order, some of the thoughts that led me to posit this guess.

My premise begins with the knowledge that Han apparently plays a fairly major role in the plot, given that Harrison Ford’s recent injury shut down the entire production schedule for two weeks (an indication that his is much more than just a “cameo,” which easily could have been filmed around, with some scenes rescheduled for later in the shoot).

Some critics decried the rescue of Han from Jabba in the first act of Return of the Jedi as a cop-out, contending that his death would have provided a dramatic catalyst for the other characters. Of course, Lucas wasn’t going to go there (he’s George Lucas, not Joss Whedon); even Han’s blindness following his release from carbonite was temporary. Such characters in traditional heroes’ tales often suffer a permanent physical loss, such as blindness, that is compensated for by new wisdom or insight. Han’s blindness wore off pretty fast, and by the end of the movie he was back to being good ol’ Han Solo, the wise-cracking pirate with a heart of gold. So maybe J.J. Abrams and company will want to make a big end for the character this time out.

For all we know, Harrison Ford — who just turned 72 this month — stipulated that while he’d gladly reprise the role that made him famous, it would be just this once, and that he didn’t want to be running around playing a space pirate at 75. Even if he made no such stipulation, the age of the actor is a big factor. Which leads me to… 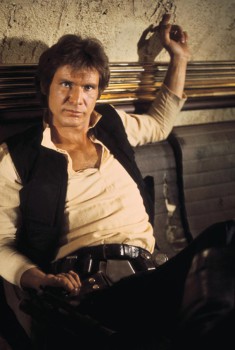 Abrams made the choice — smartly, I think — to pick up the story roughly parallel to the “real time” that has passed since the original films, i.e., about thirty years after the toppling of the Empire. Since we can probably assume that the age of the character Han Solo and the actor Harrison Ford are roughly synchronous, everyone’s favorite space smuggler when we pick up the story is now in his seventies and likely getting about as old and creaky as his famous ship.

Wookies might live past the century mark, and whatever alien race Yoda belongs to can presumably live to be 900, but our “human” counterparts in the Star Wars universe all seem to age roughly the same as we do. The average life expectancy of a man here on our planet is about 76. I hope that Harrison Ford lives to be a hundred, and if he is still making action flicks in his 80s, more power to him. But odds are that his fictional counterpart will finally succumb to old age within a decade or so, if nothing else gets him first.

Given the chronology and timing of these sequels, we just happen to be rejoining these beloved characters at about the time they will start facing the one foe that no fancy flying or light-saber wielding can overcome. We’re reentering the narrative when many of the original characters are nearing the ends of their natural lives (robots and certain alien races excepted).

So instead of just letting an iconic character like Han Solo check out in his sleep or succumb to natural causes, the storyteller’s instinct is to say Why not make his death dramatic, make it special? Give it a big pay-off, like Arthur falling to Mordred or Beowulf being mortally wounded in his final battle against the dragon.

And what better pay-off than to use it as a catalyst for Han and Leia’s own son?

Perhaps this young man takes after his pirate father, is a rebellious, willful, self-centered type. Abrams is drawn to this character type (c.f. his interpretation of young Captain Kirk in the new Star Trek films) being put in situations where a burgeoning sense of responsibility — to a loved one, or their friends, or their crew who are counting on them — forces them to channel that rebel passion and to put their own lives heroically on the line.

Perhaps some new threat from the old Empire is rising, or some new iteration of the dark side of the Force, but young Solo does not feel it pertains to him; he has no sense of personal obligation. His father may have been involved in the overthrow of the Empire — but that was thirty years ago, before he was born. For his generation, that’s in the past the way the Cold War is in the past for young people here on Earth. (This is an interesting parallel — and a potentially rich perspective to mine — provided by maintaining the passage of time from the original films.) So when his father comes out of retirement to oppose this new threat, he is conflicted. Only when his father dies does it become his own fight.

What would one do with the story from there? What form will this new threat take? What new adventures do Abrams and Kasdan and the rest have cooked up for us?

This is about as far as I’ll go with my speculation. If any of it proves on-the-money, it will only be because it strikes me as a natural course for the story to take. We’ll see, the next time we visit that galaxy a long time ago and far, far away.

I agree with all of this. Ford admitted that he tried to get Lucas to kill Han off at the end of Empire but he wouldn’t do it.