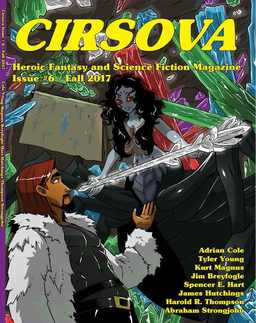 Another month, another roundup. While I’m still dubious of any sort of serious swords & sorcery revival, there is most definitely a renewed interest in the older roots of fantasy and science fiction going on. Howard Andrew Jones is editing a new magazine, Tales from the Magician’s Skull, that is inspired by Gary Gygax’s fabled Appendix N. The folks at Castalia House have built up a serious following based on their love of pulp and Appendix N. One of the most serious proponents of some sort of pulp restoration is P. Alexander, editor of Cirsova magazine.

The latest issue of Cirsova, #6, is 126 pages long and contains seven stories and an installment in an ongoing epic poem about John Carter of Mars. There’s more of a science fiction emphasis in this issue than suits my tastes at present, but that doesn’t detract from its general high quality.

The magazine kicks off with “The Last Job on Harz,” by Tyler Young. When a party of miners is wiped out in horrible fashion on the planet Harz, two government agents are sent out from Earth to investigate and protect the interests of the Company. The Company, properly known as Universal Resources, is one of those monolithic businesses found across science fiction. The agents quickly discover that some heretofore unknown entity, in fact a whole herd of entities, is at large on Harz.

Aside from the overly familiar basic plot of the story and its too-obvious conclusion, “The Last Job on Harz” skips out on most of the action. Maybe it’s just me, but in a story featuring creatures described as a cross between a praying mantis and a kangaroo and with “an armored, segmented body, long arms ending in curved claws, and a narrow insect-like head,” I want more of them. Too much of the tale is given over to not very exciting detective work, and the most interesting of that takes place off camera.

“Death on the Moon” by Spencer H. Hart, flips the setup of the previous tale. Bert Henderson is an agent from one of those sci-fi monopolies, in this case, Phillips Atomics. He’s sent to the Moon to investigate a murder and soon finds himself swept up in a plot involving gangsters, a scientist, and his (of course) lovely daughter. Set in a mythical post-WWII world where space travel and lunar colonies came to pass, it has a good hardboiled atmosphere, and plenty of whiz-bang chrome-plated-rocketship details.

The first fantasy story is “The Battlefield of Keres” by Jim Breyfogle. Mangos is a warrior who has taken on one bet too many, and has agreed to try to find the lost helmet of the hero Gorman. Gorman was slain at the battle of Keres ages ago, and the battlefield is now haunted by spirits and monsters. Only with the assistance of a young woman named Kat, who is in possession of serious historical knowledge of Gorman and the battle, does Mangos stand a chance of winning his bet. This is nicely paced and nicely atmospheric S&S. Mangos and Kat seem to have been created with future adventures in mind and I, for one, am willing to follow them.

“Othan, Vandal,” by Kurt Magnus is short and sharp. Othan is a professional thief. When he steals a magical talisman from a jungle tribe, it turns out he has made a major mistake. Before long, he is suffering from a mysterious, unrelievable ailment, and starts seeing the tribe’s shaman wandering the crowded streets of his home town. Not exactly funny, there’s a wryness here I found enjoyable.

I absolutely loved the next story, “Temple of the Beast” by Harold R. Thompson. Professional explorer and adventurer, Captain Anchor Brown is determined to prove the existence of the legendary God-Beast of the Harmarg Hills. With a native guide, a gritty photographer, and a train of bearers, Brown makes his way into the hills unaware of just how much danger he is marching toward.

In addition to the story’s terrific action set-pieces, I dug Thompson’s steampunkish setting. It’s got a different feel from “The Unfolding of the World (reviewed by me here) but I liked it just as much.

“Tear Down the Stars” is another entry in Adrian Cole’s ongoing Dream Lords saga. Arrul Voruum is a witchfinder dedicated to hunting down and wiping out the forces of darkness plaguing a far-future Earth. Told with Cole’s usual lavish imagination, the tale is filled with mysteries to be solved and horrible manifestations of evil to be killed.

Abraham Strongjohn’s (and if that isn’t the coolest name for a pulp author, then I don’t know what is) “The Magelords of Ruach” is a sequel to his tale “At the Feet of Neptune’s Queen” back in Cirsova #1. For all Strongjohn’s skill at action and creating wonderful villains, the previous story, as I wrote at the time, didn’t click for me. This one, quite delightfully, does.

Transported to the prison moon, Triton, the warrior Ch’Or and his betrothed, Ra’Ana, find themselves at the mercies of the Magelord, Inuon. A terrible, though fortuitous, attack on the band of jailors transporting the exiles, frees Ch’Or. Soon he finds himself at the heart of an old mystery regarding the Magelords’ rise to domination over Triton and the movement to overthrow them. This sort of story — bold hero must escape, rescue his still imprisoned girl, then overthrow the villain — isn’t particularly original. It probably wasn’t very original in the heyday of the pulps, but when it’s done well, with gusto and color, it still has the power to excite. Strongjohn has achieved both those things, and more.

The installment of poem “I Am John Carter” is good. At this point, to get the most out of it, one needs to go back and read the preceding four chapters. You should probably do that.

The two stories in Swords and Sorcery Magazine Issue 67 are very different from one another, and both fairly good. The first, “Gallows Dance” by Dan DeFazio, is a nasty little piece of work featuring his ongoing character, the Bastard D’Uvel.

A witchfinder, Matthias Krogh, has deployed his talents in the most awful of ways:

The town lay at the edge of the Black Forest, its name unremembered. It was just after sunset, and the town—village, really—smelled of burning wood and rotting leaves. In the center of the muddy square stood the gallows, and from it hung the corpses of two women, one young, one old, their tongues distended, sightless eyes staring at nothing in particular. A cloud of black flies buzzed about, laying eggs in their open mouths. Perched on a gable overhead, an unclean bird squawked and waited for its chance to feed.

D’Uvel and his travelling companion, Angelique Malveaux, come across this scene of horror and decide something must be done about the witchfinder, a man who knows far less about witches than he realizes.

The second story, “The Bargain,” by Tom Howard, is not remotely swords & sorcery. It is a good, creepy tale that would have served perfectly in a Halloween issue of the magazine. A miserly man falls prey to his own lusts when two distant relations come seeking his help to resurrect a dead member of their family.

Swords & Sorcery Magazine is free to anyone willing to click on the link supplied above. You can then click through their archives to your heart’s content, again for free. Cirsova, on the other hand, will cost you a whole $2.99 for an e-book version. It’s really hard to do better than that. Either way, you should check them both out and spend some time getting lost in good, pulp adventure.

New Review up from BlackGate | Cirsova

[…] Pretty positive review of our latest issue here at BlackGate. Check it out! […]