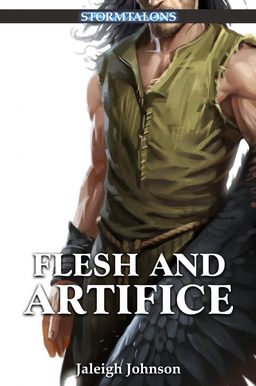 Pro tip: magic is dangerous and unpredictable. You might want to be the next Gandalf, but every type of magic in every fictional world out there carries its share of risks, and even an experienced practitioner can stumble and find themselves blown up, trapped in a pocket dimension, or awakened on a wooden table with a raven’s wing for an arm and two other creatures sharing space in your brain. That last one might seem difficult to imagine, but it’s one of the core premises of Flesh and Artifice, a novella by fantasy writer Jaleigh Johnson in the world of Stormtalons, created by Ed Greenwood.

(Full disclosure: I have a Stormtalons short story published by TEGG, too, but one of my cardinal blogging rules is to be 100% honest and as unbiased as possible in my reviews – which I hope has come across in previous posts, and continues here.)

Being part of the shared Stormtalons universe, Flesh and Artifice has to play by certain rules. One of the best things about Johnson’s writing, though, is that she manages to make everything you need to know about this world clear without any “as you know, Bob” moments or info-dumps; instead, specific bits of information are woven into the narrative where required without breaking the flow.

What surprised me about so short a work is Johnson’s ability to keep the narrative moving and make the characters clear and relatable without missing many beats. If anything, I wish Flesh and Artifice had been longer… not because I feel like there are things missing, but because I wanted to see more of what these characters are capable of and where their journeys might take them next.

One thing I have to point out, though, is that the story you get is not the one you expect from the novella’s back cover. When I read the description of “a dying wizard who tells three very different but equally fantastic versions of his life story,” I was expecting something along the lines of The Thirteenth Tale by Diane Setterfield or the infamous “do you want to know how I got these scars?” aspect of Heath Ledger’s Joker – basically an overarching mystery that will somehow be integral to the plot.

That particular promise from the description isn’t fulfilled; it’s established very early (so I’m not spoiling anything) that the three minds sharing this wizard’s body are distinct, and one of the major plot points becomes separating these three creatures, not figuring out who is who.

There is still mystery to Johnson’s novella, but not the mystery you would expect. Regardless, the pacing is superb, the characters are detailed and interesting, and the core story is quite fun, so I’d recommend checking it out. You can also find Johnson’s non-TEGG work on her website.

An Ottawa teacher by day, Brandon has been published in On Spec, Third Flatiron Anthologies, and elsewhere. Check out Sunvault: Stories of Solarpunk and Eco-Speculation on Amazon now, featuring his short story “Pop and the CFT. Learn more at brandoncrilly.wordpress.com or on Twitter: @B_Crilly