Australian writer Garth Nix became a New York Times bestselling author with The Old Kingdom series, which began in 1995 with Sabriel. He’s had a very significant career quite apart from these novels, with his popular Seventh Tower books (6 volumes), The Keys to the Kingdom (7 books), Shade’s Children (1997 — that’s the publication year, not the number of volumes), and many others.

But The Old Kingdom remains perhaps his most popular series, and it’s appeared in multiple editions. At various times it’s also been called The Abhorsen Trilogy, The Old Kingdom Chronicles, and The Abhorsen Chronicles. He’s returned to it many times over the years… often enough, in fact, that it’s hard to figure out just how many books there are, and how they all fit together.

Hard for me, anyway. So the task I set for myself today was to get the whole series sorted, including all the various prequels, sequels, collections, omnibus volumes, and the like. Here we go.

The Old Kingdom began with Sabriel (1995) and its two sequels, Lirael (2001) and Abhorsen (2003). All three were published in hardcover by HarperCollins with gorgeous covers by Leo Dillon and Diane Dillon.

The HarperCollins editions of The Abhorsen Trilogy, and Across the Wall. Covers by Leo Dillon and Diane Dillon

Nix’s third series, the Old Kingdom books (Sabriel, Abhorsen, Lirael, and two more forthcoming) are aimed at a somewhat older audience, teen to adult. They’re set in Ancelstierre, modeled rather on World War I England and, on the other side of the wall, a magical Old Kingdom where time and reality operate differently, whose existence is officially denied by the government of Ancelstierre. The main characters are connected to the line of the Old Kingdom rulers or of the Abhorsens, or both. The Abhorsen has the power to journey into the lands of the dead and combat the dangers arising there, in particular any dead trying to exit back into the realms of the living.

The title character of the first book is the teenage daughter of the last Abhorsen, who has disappeared and whom she must rescue. I don’t find the world-building as inventive and wackily coherent as in the Keys series, and Sabriel seemed rather predictable page to page, though still quite full of incident and adventure. By the time I reached Lirael, however, reading them was like crack, and I’m definitely looking forward to the next.

The first three books above were packaged up and sold in a boxed set as The Abhorsen Trilogy. This is how I thought of the series for years. 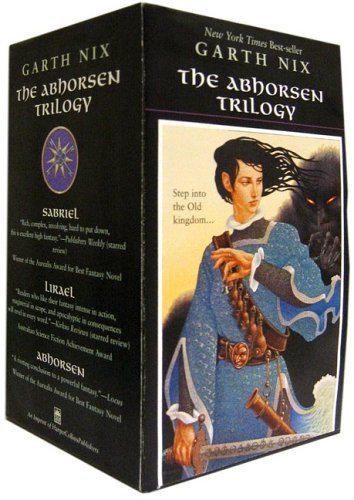 The Science Fiction Book Club, as is its way, did a handsome hardcover omnibus edition in 2003. They even commissioned a new cover by the Dillons. 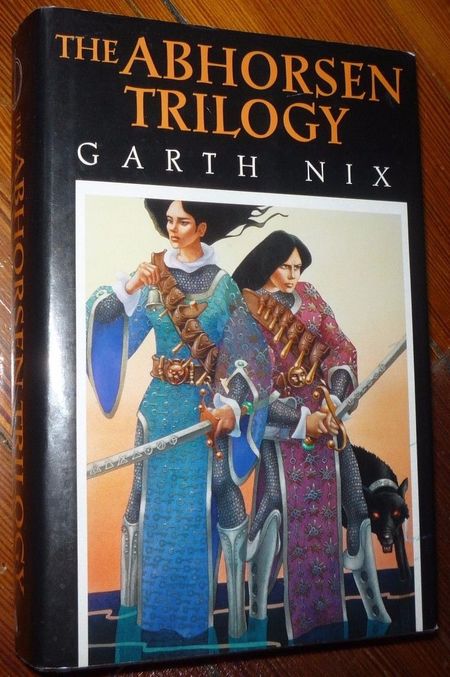 Of course, the real curiosity is that book on the right above, Across the Wall. It sure looks like part of the series — it’s even got a Dillon cover. It’s not, however. It’s a collection of a dozen stories and two essays.

It has a definite connection to the series, though: It includes the 109-page Abhorsen novella The Creature in the Case, originally published in the UK as a standalone chapbook priced at £1 for World Book Day in 2005. For Old Kingdom completests, this one is a must have, either in its standalone configuration on in the collection.

After a break of nearly a decade, Nix returned to The Old Kindgom with prequel volume Clariel in 2014. This was the first of the series to break with the Dillon covers. Instead, it featured art by Larry Rostant, and mirrored the design of the 2009 HarperTeen trade paperback reprint of the entire series. Those are the versions shown at the top of this article.

Like its predecessors, Clariel offers exceptionally disturbing monsters, the tragic undead, gorgeous worldbuilding, and coming-of-age anxiety that uses its powers for good. Well, in Clariel, the good is more complicated than ever before, because the title character has no talent for the Charter Magic that could connect her to the natural laws and relationships that make her world possible. Clariel’s knack is for Free Magic. While the Free part sounds good at first, Free Magic tends to corrode all relationships based on compassion, protection, and kinship, instead dragging its human practitioners into the thrall of monstrous beings older than the world. How can a girl with such a knack come into her power without destroying everything she holds dear?…

It’s in Clariel’s dedication to mastering her royal berserker heritage that we see her at her best. That’s also where we see the most intriguing glimpses of where the series may go next. Garth Nix has said that his next novel will return to a character from Abhorsen who has had an infusion of Free Magic, and that character may well take the the balance between profound self-discipline and profoundly untamed magic that Clariel struggles with into yet another fresh take on the Old Kingdom. 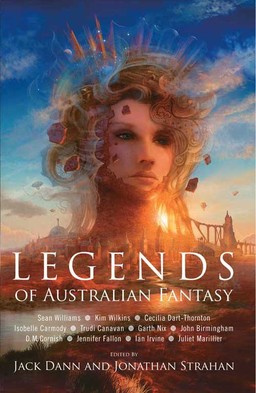 A year later Harper released the hardcover To Hold the Bridge, a second short story collection. It contained another Old Kingdom novelette, “To Hold the Bridge,” originally published in Legends of Australian Fantasy (2010), edited by Jack Dann and Jonathan Strahan.

Fans were hungry for a genuine continuation of the story though, and they got their wish in October of last year with Goldenhand, which takes place six months after the events of the original trilogy, and follows The Creature in the Case.

I think that sorts out the major releases. Here’s the complete publishing details for the original US editions.

See all our coverage of the best Series Fantasy here.

Need to read more Garth Nix. I haven’t read any of his novels, but I really enjoyed the Sir Hereward & Mr. Fitz stories (about a knight and his companion magical puppet) I found in different anthologies

That reminds me — there’s a Garth Nix link I forgot to include in the above list. Back in 2014 Derek Kunsken reviewed Sir Hereward and Mister Fitz, which collects the Hereward & Fitz stories, for us as part of his Voices in Fantasy Literature series:

I’ve added it to the list. Thanks for the reminder!

It’s good to see Garth Nix is still writing. I loved his Seventh Tower books when I read them in the 6th grade.

Yep, you’ve got the connections among the books figured out. They should be read in order of publication, not in-world chronology. Clariel takes place centuries before The Sabriel Trilogy, but it would probably be hard to get the subtler layers of the story for a reader who hadn’t read Sabriel first. “To Hold the Bridge” could probably stand on its own all right, but having read it adds a great deal to the worldbuilding in Goldenhand. This is one series for which it’s worthwhile to be a completist.

They’re all remarkably fast reads, un-put-downable, and fun. I love these stories.