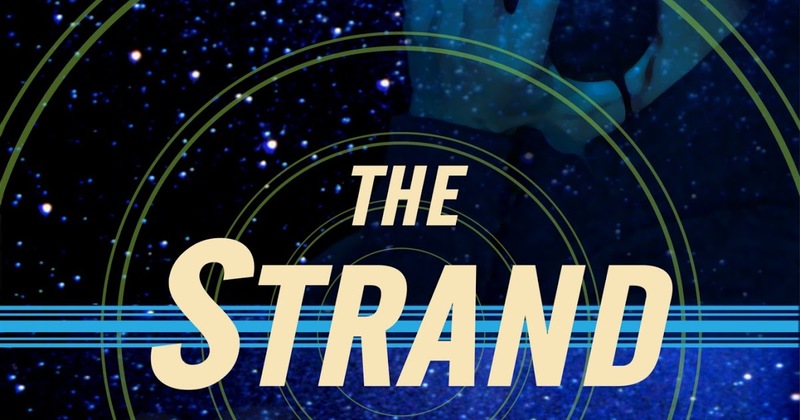 I was three years old when Star Wars scorched movie screens with the force of a Death Star Superlaser. 2001: A Space Odyssey had already been out for almost a decade, Captain Kirk and Mr. Spock syndicated for twice the duration of their original mission. Sci-Fi, in other words, had already conquered both the big and small screens. Radio shows had been long superseded by new technology. Yet here I am in 2017, thoroughly enjoying the Literary Wonder & Adventure Show, a retro audio show streamed to me via a wireless router, via a cell phone tower shaped like a palm tree, and ultimately from the workstation of the talented Robert Zoltan.

His latest offering, “The Strand,” is short, compressed tale, which may have gone without a single commercial break back in the old days. Nonetheless, it contains all the ingredients of compelling drama — passionate characters, a setting bursting with possibilities, high stakes, and a very clever literary device which underpins it all.

The milieu of The Strand is only quickly sketched in, but it suggests a multiverse of planets, their populations going about their workaday existences ignorant of shadowy organizations doing battle to control the fate of them all. Agents of these organizations can travel between the dimensions. Yet agent Guy, the protagonist, is preoccupied with a more personal concern: in his travels, he met and fell in love with local girl Hope, and soon thereafter, they were forced apart into different planes. Now, Guy can only speak to Hope using a jury-rigged machine via a Strand — a wispy, elusive thread of electricity or astral energy or whatnot.

What I like the most about this setup is how it resonates with the very medium of the podcast. We live in a world where hundreds of millions of people watch videos on their phones, where many of us have TVs the size and shape of large picture frames, and where it’s downright difficult to avoid a TV if you want to go out to eat. But the world of the Literary Wonder & Adventure Show, and of The Strand, is purely audio. And Guy’s Strand-seeking device is lo-fi indeed! There’s something primitive and visceral about the hero searching with all his concentration, across planes of existence, for a few words from his beloved. That situation is heightened, for me, at least, by the fact that I’m experiencing it via a radio show.

Within the span of about fifteen minutes, we’re introduced to this richly suggestive setting and Guy’s urgent need to reunite with Hope. Of course, it wouldn’t be fiction if everything went as planned. Suffice to say that The Strand delivers some nice jolts of adrenaline, along with the nostalgia.

But don’t call the LWA just a podcast. Robert Zoltan, author, composer, and illustrator, has taken the time to craft a deep and immersive program. The spooky theme music brought me immediately in the mood. The sound effects and incidental music heighten the emotion and drama. The female voice talent, Danita Bayer, did a great job with Hope. I also enjoyed Robert’s rendition of Guy, even if his vocal delivery sounds straight out of the 30s, to my Gen-Xer ear. If anything, the hero’s anachronistic, Buck Rogers voice contributed to the intermingled feelings of nostalgia and eeriness that run through The Strand. Some of the other sound effects really hit the spot — although I’ll avoid naming them to avoid spoiling it for listeners.

In the space of short commute or less than half a Star Trek episode, Zoltan has created a quality experience in The Strand. Tune in here and enjoy!

Michael, thanks so much for the wonderful review. It is so gratifying after doing the enormous amount of work on a dramatization, to hear from someone that really “gets” what I was trying to do in almost every way.

The retro feel in both writing and delivery was intentional, harking back to early radio perhaps, but even more, to the original Outer Limits series from the 1960s. And the characters of Guy and Hope were supposed to sound like people circa the 1940s. My inspiration for the voice of Guy was actually Gregory Peck!