Just a short post this month. It’s that story-dry period between magazine issues that comes along a couple of times a year. Since I missed last month’s roundup, I thought I’d have two issues of Swords and Sorcery Magazine to review, but the June issue hasn’t come along as of June 25th. I do have a cool extra, though, that I’ll leave to the end.

Swords and Sorcery Issue 64 is a typical issue of the publication. That means two straight up swords & sorcery stories, just like in almost every other issue.

In “A Woman of Means” by James Edward O’Brien, an aging and mostly-retired thief named Shanley is approached by the titular character. She wishes to hire him, the only reliable independent thief in town, for a special job (isn’t that always the way?). Instead of the heavily guarded and magically warded sorcerers’ library, she wishes him to snatch some grimoires secretly produced in its bindery.

O’Brien does a bangup job conveying Shanley’s declining skills. It’s the best part of the story.

He eased the pick into the keyhole, caressing the sliver of tightly coiled steel as if handling an icicle. He shut his eyes tight. He didn’t need to see shit; this was about feeling. This was second nature to him. Once upon a time. He could feel the tension of the padlock’s internal mechanism through the shaft of the pick. He could feel the accursed thing start to give.

He felt the lock jam as the pick caught in the rusty mechanism. He jiggled the pick gently, but the damn thing wouldn’t budge.

He swore up a storm, and yanked. The pick broke off in the lock. He mopped cold sweat from his brow. Cursed. He assaulted the lock with a barrage of kicks. The outburst only managed to rile up a pack of rats. They swept across the road in a wave of chattering teeth and naked tails.

Shanley cased the block once more to ensure he hadn’t drawn the attention of any passersby. Once he affirmed that the coast was clear, he hooked his swollen fingers through the intricate welded contours in the gate and hoisted himself upward. Nothing came easy these days.

Arms and shoulders burned as he struggled to clear the blasted thing. There was a time when he could scale a fence with the best of them. It was as if the world spoke a different language since he’d gotten out of the pen. A language made alien by the passage of time, one that left his entire body tongue-tied.

He was almost to the top when his hands lost hold on the freezing iron bars. He plummeted downward.

Once he gets into the bindery, it turns out his luck has slipped as much as his capabilities have. The story takes a few, relatively unexpected, dark turns before reaching its grimly satsifying conclusion.

The unicorns of Melanie Smith’s “Glass Houses” are “terrible beasts, hugely muscled and murderous, their horns serrated and venomous.” Recently, they have ravaged the town of Tythburn and now the citizens of the glass-spired and crystal-domed Second City are worried they are next.

The story is narrated by Tab, a woman with a mysterious past. She informs the reader that when she was a child, she and her mother were enslaved by raiders and eventually sold to the Queen of the Second City. Gradually, she reveals more of her past, and her role in the city’s future. The title proves to be both a description of the physical nature of the Second City as well as providing a hint about the nature of its denizens. Devoid of any action, what weight the story has comes from Tab’s slow unveiling of her life story. 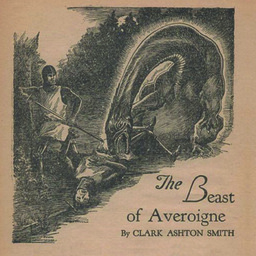 And now for something different. Last month Howie Bentley, sword and sorcery writer and musician, asked if I would be willing to check out an audio version of Clark Ashton Smith’s “The Beast of Averoigne.” I said absolutely.

Matthew Knight is the vocalist/guitarist/songwriter for the epic metal band, Eternal Winter. They’ve got a S&S-themed album, Within the Castle Shadowgate, which he sent along with The Beast of Averoigne disc. If you know bands like Iron Maiden or Blind Guardian, that’s a good idea of Eternal Winter’s style.

That style and theatricality are what Knight brings to bear on his telling of Smith’s classic tale of a mysterious beast wreaking havoc on the people of Averoigne. Averoigne is a fictional province of France, and Smith wrote eleven stories and a poem set there during the middle ages.

Knight attacks the story with gusto. He makes the voice of the story’s narrator, Luc le Chaudronnier, that of a very precise gentleman. Behind Knight, giving extra dimension to the telling, are ambient music and minor sound effects. These, created and composed by Jon Zaremba, are perfect for the story, helping create an atmosphere of haunted weirdness.

Knight has divided “The Beast” into five parts. Between these divisions, he recites the four stanzas of Smith’s poem, “Averoigne.” For these he has written some very appropriate and very non-metal music. Altogether, the disc is approximately 40 minutes of superbly presented S&S spookiness from one of the genre’s founders. 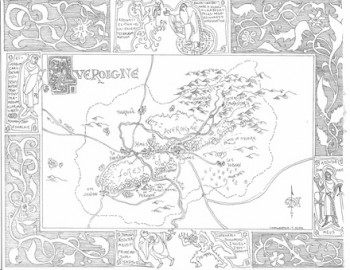 I like this a lot. I’ve written before that I see the roots of swords & sorcery in the stories we told each other around the campfires in our dim and distant past. There’s something inherently cool about hearing a good story read aloud (check out Robert Zoltan’s “The Blue Lamp” for someone doing this with his own story). The best stories, no matter how fantastic, sweep you up inside of them. Told aloud in a convincing manner, this can become an even more intense feeling.

Knight’s The Beast of Averoigne is $6.99 and is worth it. The packaging is replete with art illustrating the story, including that of J.M. Wilcox from the story’s original publication in Weird Tales in 1932, and Tim Kirk’s map of Averoigne. There’s a promotional clip on Youtube you can check out before buying. I think you’ll like it.

That’s all for this month. Next week I’ll be back with another classic sci-fi review. Specifically, I’ll be looking at John Brunner’s proto-cyber punk novel, The Shockwave Rider. It was inspired by Alvin Toffler’s non-fiction study of information overload, and I’m curious how it holds up now that we’ve passed way beyond anything Toffler imagined forty-seven years ago.