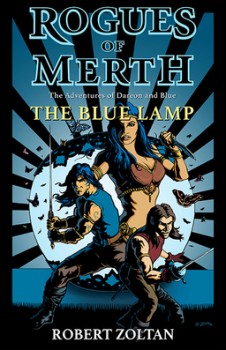 Let me confide a secret I have never told anyone before: sometimes, when I’m reading a story, and I’m all by myself, especially if it’s night and the only illumination is from my reading light, I’ll read out loud. And do voices. I’ll only read the dialogue out loud, reading the rest silently so it’s like I’m creating my own radio show. I like to think it sounds pretty cool. It’s definitely fun. When Robert Zoltan Szeles began telling people he was hard at work on an audio version of his story “The Blue Lamp,” I was jazzed.

“The Blue Lamp” first appeared in Heroic Fantasy Quarterly #26 last year, as written by Robert Zoltan (a name, you have to admit, is pretty awesome for penning S&S). I liked it very much and reviewed it favorably in my October 2015 Short Story Roundup:

A catman, a mothwoman, and an eerie blue lamp figure in Robert Zoltan’s very fun and self-illustrated (well one picture anyway) “The Blue Lamp.” For any fan of S&S those three things should be enough to make you read the story. We know what we like and when we seen it we flock to it like, well, moths.

For those wanting to know more it’s simple: two friends — a tattoo-covered barbarian called Blue, and the poet (and master swordsman) Dareon Vin — get into a fight. Wandering into the big city by himself, Blue ends up looking into the wrong magic blue lamp. When Dareon goes out to find him, unexpected things start to happen. The two physically and temperamentally mismatched heroes bring to mind a certain pair from classic S&S, but only enough to be good fun, not reeking of thievery.

I’m not a big fan of audiobooks, but there was something about Zoltan’s enthusiasm in talking about the project that caught me. I already knew I liked the story, and thought a short story might be the perfect length for an audio production. Often when listening to audiobooks I get distracted and have to rewind. “The Blue Lamp,” at just a little over 5,000 words, seemed just right.

Zoltan has done a marvelous job with “The Blue Lamp.” It is not a straight reading of the story, but a full sound production, like a radio show. First, there’s the music. At times ominous and others majestic, it gives the story a terrific aural background against which to unfold. The mysterious moments have a little more mystery and the action scenes a dash more vim. The same goes for the sound effects. Never overwhelming, they bring the production more to life.

The characters are acted out with great liveliness. It never sounds corny, a problem fantasy can have when it’s read out loud.

The author does all four male voices himself, giving each character his own timbre that I found surprisingly matched my own idea of what he should sound like. Zoltan’s enthusiasm is obvious from the relish with which he’s thrown himself into the roles. The mysterious Ravel Nebelnezar’s voice echoes ominously in a slightly familiar, slightly alien accent, while you can almost see the smile on the wily Dareon’s face. Zoltan even manages to make the big barbarian, Blue, sound bigger than his co-stars.

Actress Danita Bayer does an equally splendid job with the two female characters, even if she must deliver one with a high-pitched, effects-altered voice. Her portrayal of the trapped dancer, Malika, has just the right amount of resignation and hope to match the text.

“The Blue Lamp” is good fun. My experience with S&S transferred off the page has not been positive. Most S&S movies suffer from cheapness, or only focus on the most basic surface elements of the genre. That doesn’t happen here. Cheapness isn’t an issue, and Zoltan knows that S&S is more than just swords and sorcery. Without negelecting those titular elements, he brings some depth of character, nice inventiveness to his worldbuilding and scene setting, and good basic storytelling.

After listening to “The Blue Lamp,” I had several questions for Zoltan regarding the whys and wherefores of his production. He was kind enough to respond, and you can read his answers below. For regulars at Black Gate, several of Zoltan’s upcoming projects feature names you might know.

1. What prompted you to do this?

Recently on a trip to the Midwest to visit relatives, I was talking with my younger niece about what course to next pursue with my varied artistic endeavors. I remembered the question one is supposed to ask oneself in following one’s dreams: “What would you do if you knew you could not fail?” Then, I remembered that when I was twelve years old, I created an audio drama of an Iron Man comic book with only a cheap cassette recorder and microphone, my dad’s short wave radio, two walkie talkies, and whatever I could find around the house. For reverb, I recorded segments in the shower. I performed the voices of all the characters, male and female, except for Iron Man, played by my friend.

I told my niece that if I could do anything, I would do something like that. Not only was it fun and fulfilling, but it would bring together for the first time almost all of my artistic talents: writing, music composing, sound production, illustration, and graphic design. So, when I got home, I began working on The Blue Lamp audio drama. I chose The Blue Lamp because it had been published in Heroic Fantasy Quarterly and was one of my better adventure stories. Of course, I had no idea what I was getting into. The production required eighty-five audio tracks, and apart from the narration and voices, features dozens of sound effects, and about an hour of original symphonic music composition. I can only estimate that it took over three hundred hours to finish! It was probably the most challenging project that I have ever done.

2. Did you already have a sense of how you wanted the characters to sound ?

The voice of the characters came out spontaneously in the first reading. After the initial recording, I went back and pushed the voice style of the characters even further. Dareon and Blue are, in a way, two different aspects of my own personality. So performing their voices was not too difficult. The natural size difference (Dareon is five-and-one-half feet tall, Blue an entire foot taller) and archetypal characters (Dareon representing civilization and the thinking human, while Blue represents the wild and the intuitive human) also dictated the sound of their voices. I usually smiled while performing Dareon’s lines. This gives the voice a certain character in and of itself.

With Ravel Nebelnezar, his general sound and accent came naturally, but refining it was more difficult. Not only is his accent that of Plemora, a different world from Earth, but also, he has traveled to many different worlds. I had a few good laughs listening back to my early takes. Although he probably sounds like a mixture of Indian and Northern African, at one point, he sounded Irish, and then Scottish. But my biggest laugh came when he sounded like Triumph the Insult Comic Dog. I do plan on releasing some outtakes soon.

For the two female characters, I had a general idea of how they sounded since first writing the story. It was then a matter of finding someone to match that, which I thought would not be difficult to find in Los Angeles. It turned out to be far harder than I expected.

3. How did you find the actress?

I met Danita Bayer at Blues Dancing class. By that point, I had put ads on Craigslist and gotten dozens of responses from female voice actresses. I am not exaggerating when I say that more than half of those responding used that immature high pitched girlish voice possessed by almost every female lead character in the modern Disney animated movies. I kept receiving responses of this nature even when I clearly stated I was not looking for that kind of voice. I suspect this has something to do with Los Angeles culture. But that kind of voice, to put it politely, does not appeal to me. The remaining voice actresses did not quite match what I wanted. Malika, the dancer from Khulan, needed to sound sensual, strong and confident–a woman, not a girl. I was hoping for a voice slightly lower in tone, more like the actresses from the classic movie era. And, there needed to be a subtle archaic or untamed feel to the voice as well. I liked Danita’s voice, but the character Malika did not come naturally to her, so I needed to develop the sound with her as we worked on the recording. In the end, Danita gave me exactly what I wanted. As for Thara Jin Tual, the story describes her voice as piping and melodic. I wanted her to sound like an insane child. Danita impressed me by stepping into the vocal booth and nailing that character’s lines in one take!

4. Do you have any other audio versions planned?

Absolutely! Because I like to suffer (lol). I am currently deciding whether to produce another Rogues of Merth story featuring Dareon and Blue or my retro science fiction story, Tomorrow Girl. Either way, I hope to release another full audio drama by May of 2017. It takes 2-5 months to produce something of this scope and quality, depending on length. Until then, the monthly podcast of my company Dream Tower Media, the Literary Wonder & Adventure podcast, will be featuring interviews with Scott Oden, the author of the upcoming historical fantasy epic, A Gathering of Ravens (one of the most anticipated fantasy books of 2017) and Ryan Harvey, 2013 Writers of the Future Award Winner, about his recent series of articles about Edgar Rice Burroughs. Other podcasts might include my narration of work by Edgar Allan Poe, Lord Dunsay, and Samuel Taylor Coleridge, enhanced by original music.

5. What is the purpose of Dream Tower Media, your company that produced the Blue Lamp Audio Drama?

To help bring about a renaissance in storytelling by producing and publishing only the highest quality audio dramas, books, art, music, and other related media by the best artists in the fantastic literature field (this ranges from literary magic realism to superbly written pulp adventure). I truly believe the quality of material that I am able to produce can help to do this. But if I am to continue creating full audio dramas of exceptionally high quality, Dream Tower Media simply must have some kind of funding. If anyone is interested in advising or helping me in this matter, please contact me through the dreamtowermedia.com site. I am currently deciding whether or not to pursue crowdscourcing through Kickstarter, Patreon, or Hatchfund. The challenge is the amount of media that exists, both good and bad, which makes it difficult to reach the people that I know would deeply enjoy these productions and wish to be a part of this renaissance.

Robert Zoltan Szeles is a multi-talented artist: writer, musician, graphic designer and illustrator. Follow those links and you can see and hear that for yourself. You can purchase “The Blue Lamp” from the Dream Tower site for $9.99.

I used to really struggle reading Shakespeare. And I didn’t enjoy it too much. But then I started reading it aloud, and it was like magic. I became convinced there can be value to reading some works aloud, instead of silently.

“The Blue Lamp” was an easy choice for us at HFQ! Glad to see that it has a new lease on life with the audio version.

@Bob – I like Shakespeare on the page, but his words take on real life when spoken out loud

@Adrian – It’s exactly what I want from the genre done well.