When I was eight years old, some friends of the family gave me The Star Wars Storybook. Back in 1979, there was just one movie (and a confusing, once-seen Christmas special), and the action figures.

Everything I could learn of the larger universe of the movie that had changed my life was in that book. I wanted to know about the rebels, the past of Darth Vader and Kenobi, and who were these alliance pilots and Grand Moff Tarkin?

Some questions were answered in Empire, and Return of the Jedi, and others I got through comic books (I really enjoyed the Marvel Star Wars comic series started in 1977). And of course, we have the Jar-Jar infected prequels, which, with just enough denial, can be watchable for the light saber fights, or shown to children, who love them.

But it was only yesterday, when I saw Rogue One, that I saw the world I’d glimpsed when pressing my face against the glass as an eight-year old. I watched Rogue One with my brother, his eleven-year old son, and my own eleven-year old. And I really enjoyed it, in a complex way.

The first half was action-packed, with dizzying scene cuts that came a bit too fast for me, in part because no one in the movie is known to us. We have the Imperial Defector, the Spy, and the Hero, each with their own history and context, disconnected from the other.

The pieces started falling into place solidly at about half an hour or forty minutes, but it wasn’t that the beginning wasn’t working. It was a roller-coaster ride rather than the slightly more sedate openings of New Hope, Empire or Return of the Jedi (the latter two of which have the advantage of us already knowing the cast).

The tone was also different, in a way that really worked for the forty-something me. Firstly, the tone was set in the casting. The casting alone more broadly reflects the city I live in, something that has been missing from the franchise. This alone made me take it more seriously.

Secondly, while the Star Wars franchise has always been violent, thematically based as it was on Flash Gordon, Buck Rogers and Samurai movies, the consequences have always been emotionally distant and off camera.

Rogue One quite firmly puts the consequences of both Imperial rule and Rebellion tactics as prominently as if they were cast members. From Stormtroopers roughing up locals, to Darth Vader’s motivational talks, to the hard choices and sacrifices of the rebels, this is several steps grittier and harder than Ben Kenobi kicking butt in the cantina or Luke losing a hand. 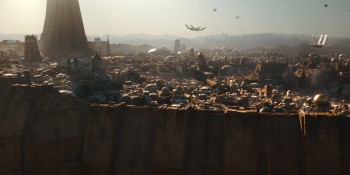 I’ve said for many years that all six original movies are aimed at fourteen year-olds (plus or minus seven years), which is why the three prequels were so hard to swallow. But Rogue One really deserves its PG rating, and both eleven-year olds were a bit surprised by what happened in the movie, to the point of protest.

Remember in the original trilogy when Mon Mothma said “Many Bothan spies died to get these plans”? Well, consider that the 10% of the tonal iceberg. Rogue One is deftly good at making us like all of the rebels, from the humans to the unclassifiable and incomprehensible and reprogrammed.

But some of the things the rebels have to do aren’t safe and it’s not really a spoiler to say not everyone makes it out safely. This was a bit of a new experience for my eleven-year old. But he still loved the movie. And so did I.

I’ve seen some chatter about it on my twitter feed, friends comparing it to the other movies, and they’re ranking it pretty highly, in the top three of the franchise. I tend to agree. This is the first movie of the franchise I’ve watched as an adult where they’ve treated me as an adult.

That’s not to say they didn’t leave room for plot quibbles, but I’m not going to get into that. Maybe after everyone has seen it and there’s no risk of spoilers, I’ll do a post on my quibbles. But for now, I’m really happy with the movie. Feel free to comment your thoughts below (spoiler-free of course).

Derek Künsken writes science fiction and fantasy in Gatineau, Québec. He blogs here every two weeks and tweets from @derekkunsken. Asimov’s has recently podcast his Aurora-nominated short story “To Live and Die in Gibbontown,” the story of a monkey with a bad visa, a euthanasia company and a high-powered rifle. You can listen to it free here. (Caution: swearing, adult diapers, and bullet-proof chimpanzees.)

Seen it twice (so far) and liked it a lot. I have quibbles, of course, but they’re relatively minor, even compared to the issues I had with Force Awakens last year.

Also, if you’re the sort of person who reads tie-in fiction, Rogue One: Legacy is a good prequel that gives much of the back story between Galen Erso and Orson Krennic and ends shortly before the events of the movie’s opening scene.

This is the first movie of the franchise I’ve watched as an adult where they’ve treated me as an adult.

Yes, absolutely. This film completely vindicates the decision to sell the franchise to Disney. I worried that the films would get even more treacly, but instead we see for the first time a Star Wars tragedy that will never stop being tragic.

The final events will be redeemed, but they will not be fixed-all-better-now, not even by a sequel. This is exactly the kind of story Lucas was constitutionally incapable of telling, and that’s part of what makes it so fresh and vital.

It’s a Hero’s Journey in which some of the heroes come to the kinds of ends that real heroes often come to in our world. What makes some people heroic is that they do what they have to do in the full knowledge that they won’t get a Campbellian homecoming.

My overriding thought after was ths was the movie we should have gotten in 1999. Lucas was trying to bring a new generation into Star Wars with the prequels, but I needed something for the fan I was, the fan who grew up on Star Wars, who needed a more nuanced look at the world. This was that movie.

First of all, I also loved Rogue One, both times I saw it.
Second, I loved the old Star Wars Storybook, and The Empire Strikes Back Storybook. Glad to see someone else remembers that long-forgotten classic.

Thanks Derek, I wanted to see a review by someone who loves the franchise, and whose critical stance I respect. We haven’t seen it yet, as we’re waiting for our friend David, as we’ve seen all Stars Wars movies together since 1977.

This review captured my feelings about this film almost to the letter. This is the Star Wars that my eight year old brain imagined between the first and second films.

I think a lot of people tend to forget that when “A New Hope” was first released the film had a bit of an edge to it (at least for children). One of the main characters killed someone in a bar, the princess was sarcastic, whole planets got destroyed and a huge chunk of the film showed us a “Hive of scum and villainy.” Star Wars had much more in common with Brian Daley’s excellent Han Solo books that Ewoks, or Jar-Jar, or the hideous Jar Jar Binks. I think many of the early Marvel Comics capture that gritter feel (yes, the giant pink rabbit had an attitude).

Considering this film is a multi-million dollar blockbuster I think Rogue One takes some huge chances and those chances pay off. It is a film for grown-ups (that kids can go to). If anything it is the return to the Star Wars of our youth that Force Awakens promised to be but wasn’t. Rogue One is an emotional roller coaster, and I have experienced that at a Star Wars films since, oh, way before you were born.

I also think this film redeems the “bad ass” reputation of one of the characters who was gutted like a dead fish in the prequel trilogies. The last ten minutes of this film are among the best moments in any Star Wars film ever. Chilling, tear jerking, and brilliant.

Great review! This is pretty much exactly how I feel about the movie. All that said, I was really looking forward to taking my 6 year old to see his first Star Wars film in the theater (he has watched some of the others and the Rebels cartoon at home), but he’s going to have to wait until next years movie for that. It’s just too “adult” for his age, at 6 I don’t think he’s really ready to process the amount of darkness that is in Rogue One. So on one hand I love the movie, on the other I’m disappointed I have to wait another year to enjoy the experience with my kid.

@ Joe H – I can’t find a book with the title Rogue One: Legacy,are you sure that’s right?

@ rjmiller – 6 would be too young for any of the films. Think about what you saw, and remember, about movies when you were six!

@ darangrissin – you may not remember, but before Episode I came out, there had been great demand for “the missing episodes”, which is why Lucas made them.

Violette: What a great tradition!
Amy: Storybook owners of the world unite!

Sorry — Not Legacy; Catalyst. Brain did something bad there.

Khovin68,
Agreed about the villain. My buddy was annoyed that said villain has a quip that seemed tonally inappropriate for the character, but yeah, those last 10 minutes, make up for it for sure.

I don’t know if I agree that six is too young for all the films, but for a kid who had already seen New Hope, Empire Strikes Back, and Return of the Jedi, six probably is too young for the emotional shock in The Force Awakens when a familiar character dies. It was too early for the six-year-old I saw it with. For many kids, seven might be too early for Rogue One.

Then again, I first saw The Shining when I was in my early 30s, and concluded I would never be old enough for that film if I lived into triple digits.

JoeH – thanks. I got that one from the library a few days ago.

@ R.K. Robinson – I was 5 when I saw Star Wars in 1977, and I certainly remember it very well-the theater we saw it in, sitting between my mom and grandmother, being scared of Vader and loving the aliens and the attack on the Death Star. It was (and still is) one of the defining moments of my life. While I don’t expect it to be a transformative moment in his life, I do anticipate seeing a SW film in the theater with him, and hopefully transferring a little of the magic it instilled in me.

@Sahrah–I thought Rogue One delivered a heroic journey on the same way that Saving Private Ryan did. Make the victory count.

The Shining rose the hair on the back of my neck too. Very few horror films deliver like that.

Keep in mind that somewhere something seeded into Vader his turning away from the Dark Side. Maybe it began with Rogue One.