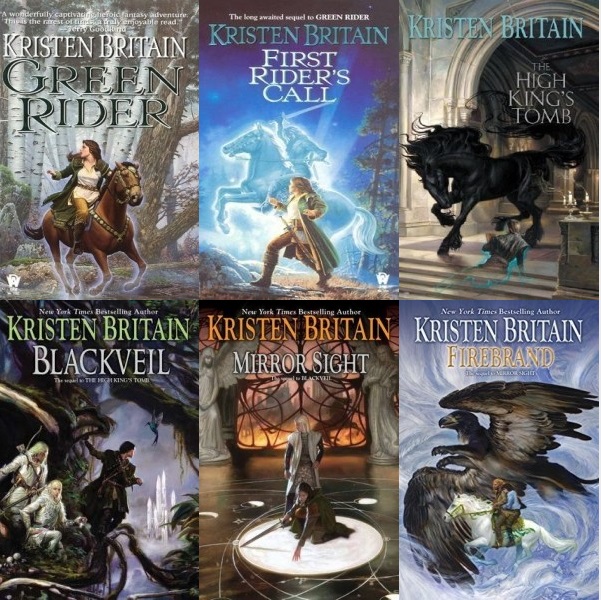 Successful fantasy novels evolve towards a series. That’s like the fourth law of Thermodynamics. An expression of the natural order of the universe. Readers demand it; publishers are more than happy to accommodate, and authors…. well, what author can refuse her public?

Kristen Britain’s debut novel Green Rider was very successful. It was only the second hardcover fantasy debut DAW ever published (the first was Tad Williams’s Tailchaser’s Song), and the extra effort paid off. I received a review copy while I was the editor at SF Site in 1998, and when I gave it to my niece Sabrina to get her opinion, her mother called to complain that she spent all her time in her room reading, and wouldn’t come down for dinner. I wasn’t at all surprised to see it become a New York Times bestseller, and kick off one of the first major fantasy series of the 21st Century.

Locus magazine, in their review of the third volume The High King’s Tomb, captured much of the spirit of these books, which I think is core to their success.

The intermittent sense of foreboding is offset by a healthy dose of old-fashioned adventure — kidnappings, a noble thief, near drowning, divine visitations, ghosts, a visit to an upscale brothel, and some very bad knife throwing… with serious nastiness still looming.

Since 1998 there have been five additional volumes, and the sixth, Firebrand, arrived earlier this year in hardcover from DAW. Here’s the complete details.

Need more evidence that this series is popular? All six volumes are still in print, nearly two decades after the first was released — ladies and gentlemen, that’s a hit series. The first five are available in paperback, priced at $8.99 for both the print and digital editions.

See all our recent coverage of the best fantasy series here.

I bought the first one in paperback, but never got around to reading it.

By the way, I have that DAW hardcover of Tailchaser’s Song.

Me too! I hadn’t realized Tailchaser’s Song was such a major step for DAW until just recently. My friends and I used to call it “the pussycat book.”

I stumbled upon the first one when it came out in paperback and bought it because it was set in a great forest. Enjoyed it.

Stumbled upon the second in paperback, thought “oh yeah, that one!” and bought it. My wife read it but I never got around to it. It had been too long, and it had a lot of pages, so my motivation level didn’t rise high enough to read it. Eventually it was purged from our collection.

Stumbled upon the third one, but nah. The lesson learned is 4-5 years is too long for a series to expect me to wait.

> The lesson learned is 4-5 years is too long for a series to expect me to wait.

I think you’re absolutely right. Readers love a good series, but not one that makes them wait too long. That’s a lesson I wish more authors would take to heart.