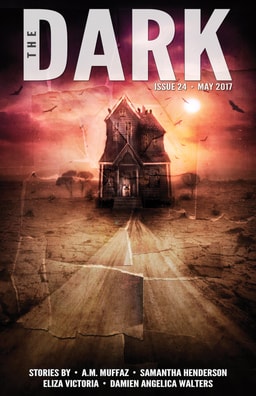 The May issue of The Dark has new fiction by A.M. Muffaz and Eliza Victoria, plus reprints by Samantha Henderson and Damien Angelica Walters. Charles Payseur at Quick Sip Reviews thinks highly of the Muffaz.

This is a story of sinking horror, of death and the proximity of death, of abuse that everyone agrees to look away from. The piece focuses on Tentzin, a man who delivers supplies to a house where the dead are prepared to be fed to griffons as part of the culture’s death rituals. The keeper of the house and preparer of the dead, Nurgu, lives there with his son, Dolgo, and his new wife, Tashi. New wife because she was delivered like a sack of salt to Nurgu following the death of his previous wife… It’s a creepy story that does a great job building up the world in order to reveal the shadow living at its heart. The action isn’t fast but there is a deep power to it and an uncomfortable silence left in its wake. A great read!

The May cover is by Vincent Chong. Here’s the Table of Contents for issue #24, cover-dated May 2017.

“The Bone Beaters” by A.M. Muffaz
“The Lark Ascending” by Samantha Henderson (from Tomorrow’s Cthulhu, 2016)
“Queen Midnight” by Eliza Victoria
“When We Taste of Death” by Damien Angelica Walters (from Exigencies, 2015)

The Dark is co-edited by Silvia Moreno-Garcia and Sean Wallace, with assistance by Jack Fisher. It is published online and in digital formats, and includes two original stories and two reprints each issue. You can read issues free online, or help support the magazine by buying the ebook editions, available for the Kindle and Nook in Mobi and ePub format. Issues are around 50 pages, and priced at $2.99 through Amazon, B&N.com, Apple, Kobo, and other fine outlets — or subscribe for just $1.99 per issue. If you enjoy the magazine you can contribute to their new Patreon account here. You can also support The Dark by buying their books, reviewing stories, or even just leaving comments.

Read the May issue here, and see their complete back issue catalog here. We last covered The Dark with the March issue. See our May Fantasy Magazine Rack here, and all of our recent Magazine coverage here.