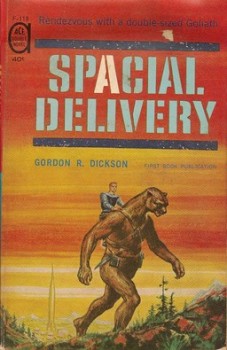 Spacial Delivery (1961), a slight and slender book, is a relic of a past age when not every new book by an author had to be some sort of masterpiece. The same year this book came out, Dickson published two other novels and ten short stories. Over the course of fifty years of published writing, he wrote 55 novels and nearly 200 short stories. I can’t say for sure, but that sort of volume seems to have given him the freedom to write whatever sort of stories he wanted, whether high-concept space opera like his Childe Cycle, pulp fare like Hour of the Horde, comic stories like his Hoka collaborations with Poul Anderson, or middle-of-the-road standalones like this book.

When my friend Carl tossed me this back in the early eighties, he told me it was a comedy. I trusted him and gave it a read. It was funny, not in the laugh-out-loud style of the Hoka stories (which if you haven’t read, are about teddy bear-like aliens who have trouble distinguishing fact from fiction, and act out human stories, including Sherlock Holmes and The Jungle Book), but good for a chuckle or two. On rereading, the humor’s a little thin, but it’s a decent enough way to spend a couple of hours.

Out in a crucial sector of space between regions of human and Hemnoid hegemony, lies Dilbia, a planet of high mountains and deep forests. The Dilbians have a rugged, frontier-style civilization, with people living in small towns or with their clans in forests. The Dilbians themselves, well, the cover gives it away. They sort of look like bears — very big bears.

To begin with, they smelled. Not overpoweringly, not even unbearably, in fact rather like dogs that have been out in the rain for the first time in several weeks during which they have not had a bath. But, definitely, they smelled.

It did not help, either, for John to notice that the two were faintly wrinkling their large black noses at him, in turn.

And on top of this odor, there was the fact of the bigness of the room; which, after ten seconds, pulled a double switch on the senses; so that, instead of John feeling that he was the same size he had always been and the room was unnaturally big, the first thing he knew he was feeling that it was normal in dimensions and he had shrunk, all of a sudden, to the stature of a six-year old boy.

But last and not least was the center of all this, the two adult male Dilbians themselves, looking indeed like a pair of Kodiak bears who had stood up on their hind legs and gone on a diet. True, their brows were higher and more intelligent than bears. Their noses were shorter, their lower jaws more human-like than ursinoid. But their thick coats of brownish-black hair, their lumbering stance, massive shoulders and forearms and the fact that they wore nothing to speak of beyond a few leather straps and metal ornaments, shouted bear at you, any way you looked at it. 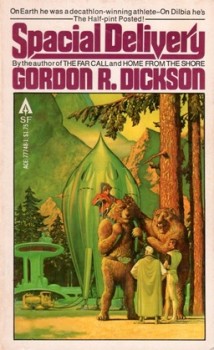 To avoid being shut out of certain regions of space, humanity is going to have to reach an accord with the Dilbians. Unfortunately, the Dilbians aren’t impressed with humans. Because humans must rely on tools and machines and are too puny to face up to “real people” in a fight, Dilbians disimissively call them Shorties.

On the other hand, the Hemnoids — incredibly strong because of their homeworld’s high gravity, eight-feet tall, and looking like “sleek Buddhas” — are more to their liking. Them, the Dilbians call Fatties.

John Tardy, a biologist working for the Earth’s interstellar bureaucracy, is slotted to go on an exploratory mission. At the last minute he is dragged off his ship and transferred to Dilbia. When Tardy arrives at the Earth embassy in the town of Humrog, Ambassador John Guy, called Little Bite by the locals, tells him that he alone has been chosen for a special mission. Tardy was an Olympic athlete, and it’s not his brains that are needed, but his physical prowess.

A human sociologist nicknamed Greasy Face, has been kidnapped by a disreputable backwoods character named the Streamside Terror. His name derives from his habit of fighting alongside streams so he can drown his opponents. When the Terror wanted to marry Boy Is She Built, daughter of Shaking Legs, the mayor of Humrog, Ambassador Guy spoke out against it. The mayor took the advice, and in retaliation the Terror took Greasy Face. In order to prove humans aren’t cowardly pushovers, Tardy is going to have go out, track down, and somehow get back the scientist from the Terror.

To help him make his way safely to the Terror’s clan lands, Shaking Legs come up with a plan. Tardy will be carried by the postman, Hill Bluffer. By declaring the human mail, no one will willingly mess with him. Of course, slung up on the Bluffer’s back like a sack of mail, the Dilbians immediately dub him the Half-Pint Posted. 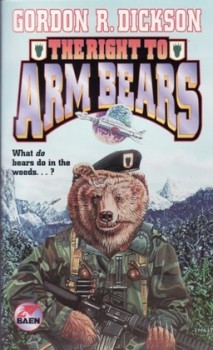 With a good deal of grit mixed with cleverness, Tardy undertakes his mission despite numerous unknowns. Why did the ambassador discourage the Terror marrying Boy Is She Built? Exactly what role is being played by the Hemnoid ambassador and his associates? And just how is he going to be able to rescue Greasy Face from the Terror, a murderer who stands at over nine feet tall and has claws and sharp teeth?

I got a kick out Spacial Delivery. It’s smoothly written and fast-paced. Tardy’s a clever character, successfully figuring out what he’s been drawn into. The Dilbians are great, whether it’s the tough-minded Boy Is She Built, constantly threatening to kill Tardy by hitting him over the head, the cagey One Man, famous for fighting and winning a feud against another clan single-handed, or the stolid postman, Hill Bluffer, who does everything he must to protect his half-pint package.

The most obvious humor comes from the Dilbians’ names for themselves and their alien guests. The name Boy Is She Built is at least a little sexist by today’s standards, but the character’s tough, and nobody’s fool. The rest of the humor comes from Tardy’s interactions with the Dilbians. Without ever lapsing into the old “humans are cleverer than aliens” trope, he does manage to think his way around them, whether they’re just making fun of him for his size, or actively trying to prevent his rescuing Greasy Face. It’s not belly-laugh funny, but it’s a nice, comfortable sort of funny that’s just right for the story.

Gordon Dickson is one of the greats of sci-fi’s post-WWII Silver Age. Some of his books — Tactics of Mistake and Soldier, Ask Not immediately spring to mind — are brilliant. Spacial Delivery is not brilliant, but coming from an author possessed of good craftsmanship, it’s a perfectly respectable, mid-level-quality book, that will bring a smile to its reader’s face.

Dickson wrote a sequel novel, Spacepaw (1969), and novelette, “The Law-Twister Shorty” (1971). Baen collected them in the utterly inappropriately-titled and -decorated collection, To Arm Bears (2000).

When I went away to college for my sophomore year in 1969, I took this book (in the Ace Double version) and read it, and the other title, “Delusion World,” in whatever spare time I could find. You’re right: this may not be Hugo quality, but it was fun, a nice break from Faulkner and Dostoevski and much of the other required reading in my major. Up to that point in my life, I hadn’t read a LOT of SF, but it already made up 75% of what I did read. I still read Faulkner and Steinbeck and Thomas Hardy and Virginia Woolf and other classic and mainstream writers, but nearly 50 years later, SF/Fantasy and Horror comprise better than 95% of my reading choices. I’ve still got Ace Double F-119, and I plan on revisiting it in a couple years. Nice to know someone else enjoyed it like I did.

The title alone is worth the price of the book (after the obligatory face-palm from the pun, that is). And I too lament the passing of “pocket books”, the traditional paperback of a size that would actually fit into a back pocket of a pair of pants, of a literary quality commensurate with such rough-and-ready treatment.