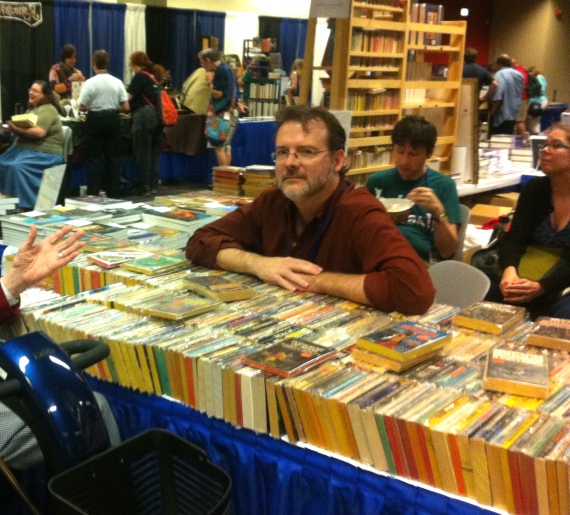 Selling vintage paperbacks at the Chicago Worldcon, 2012.
That’s Peadar O’Guilin and Kristin Janz in the background,
and David Kyle’s hand at left

I’ve been collecting science fiction paperbacks for around forty years, and attending SF conventions for roughly the same period. So it’s natural to eventually combine the two. About fifteen years ago, after I’d started selling Black Gate magazine at conventions, I decided to package up some of the older duplicates sitting in my basement and bring them along too.

That quickly became the biggest draw at our booth. As I learned the hard way, struggling in vain to launch a new fantasy magazine, the audience for short fiction in this field gets smaller every year. But interest in vintage science fiction seems to sharpen and grow with each passing month.

It was especially gratifying to see young SF readers approach the booth, eyes wide, taking in the colorful rows of hundreds of paperbacks published before they were born. Sometimes they’d make appreciative comments like, “I can’t believe you have such an incredible collection… it seems a shame to sell it!” Of course, if four tables stacked with books seemed unbelievable, the truth (that this wasn’t my collection, but just a small fraction of the duplicates from my collection) would probably tax their fragile credulity to the limit, so in those moments I’d usually just smile and say, “Shucks. Thanks.”

Becoming a seller gradually changed my buying habits, too. Like most young collectors, I started by buying everything that interested me, and collecting authors I loved. Selling forced me to become more aware of the market — what authors and publishers sold, and what books had enduring value, for example.

But more than that, selling gave me permission to buy purely on spec. To collect not just for myself, but for hypothetical future buyers. Years ago I would turn down bargain book lots sadly, aware that I already had most books in the set, and that as a lone collector there just wasn’t enough value to justify the purchase. Nowadays, however, my own collecting needs frequently take a back seat to my seller’s instincts, and I happily snap up discounted book collections regardless of how many copies I already own.

Of course, now that we’re no longer publishing a print version of the magazine, I don’t sell as often as I used to. In other words (or, as my wife puts it), what began as a way to make a few bucks and clean out the basement, has cost us a fortune and made the basement so crammed it’s virtually unnavigable. 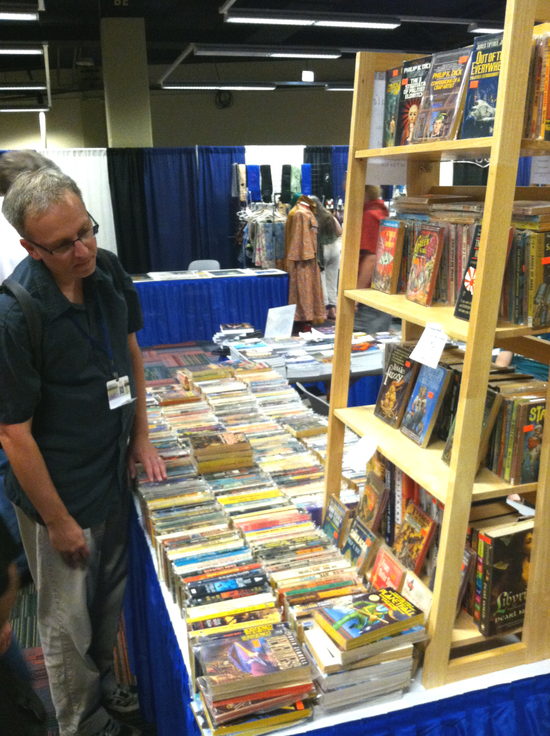 For the love of God, take some of these books off my hands

Anyway, I sometimes make great buys, and I just as often make lousy ones. That’s the life of an amateur bookseller.

But if I’ve learned anything over the last 15 years, I’ve learned that it’s hard to go wrong collecting and selling Ace Doubles — especially the early series. They’re just about the most reliable sellers I’ve encountered in a decade and a half of convention selling.

There are three major reasons why. 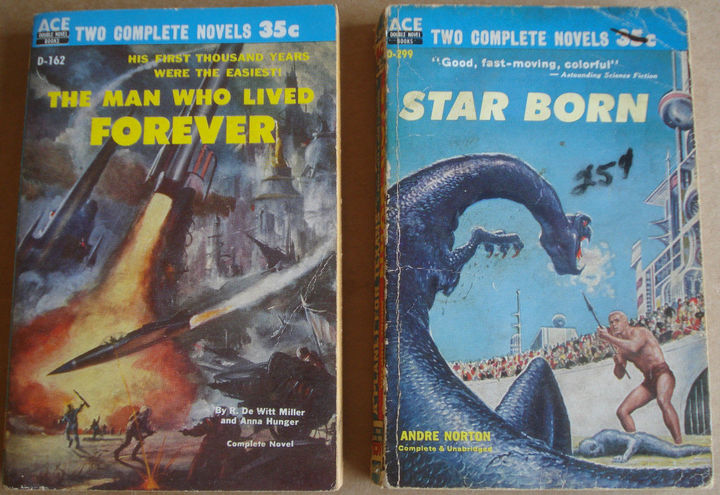 Not surprisingly, that first one on the list is probably the most important. The Ace Doubles were blessed with some of the best artists the field has even seen, and they put their mark on numerous famous (and not so famous) science fiction books. They include Ed Emshwiller (Emsh), Ed Valigursky, Jeffrey Jones, John Schoenherr, Kelly Freas, Alex Schomburg, Gray Morrow, Jack Gaughan, and many others. 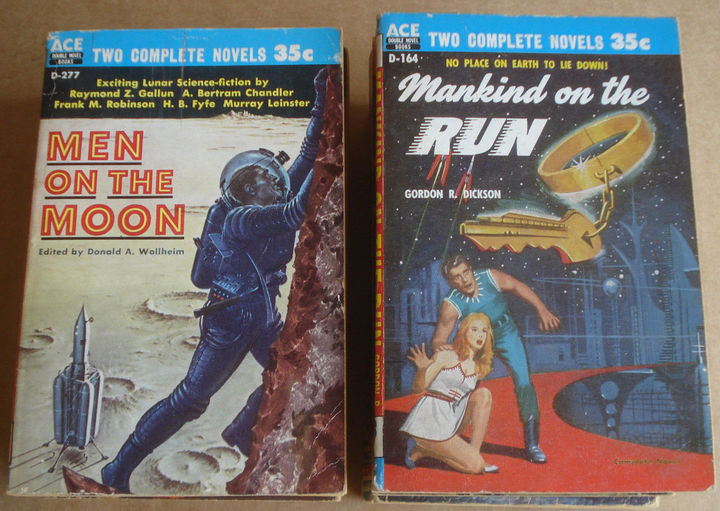 Steve Fahnestalk has a great retrospective of the art of Ace Doubles over at Amazing Stories:

Flickr also has a gorgeous gallery of some of the best covers of the D-Series here. 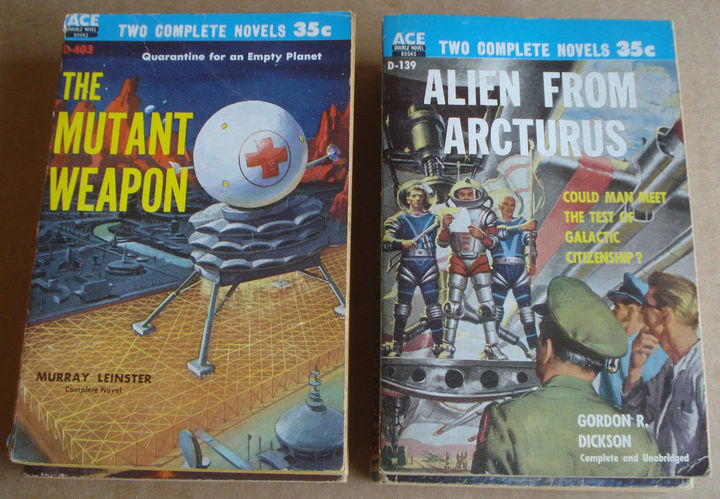 Second, you’d be hard pressed to find a line that promoted as many great science fiction writers as the Ace Doubles. They were around for roughly 25 years (1952-1978), and produced hundreds of titles. A partial list of the SF authors they published includes:

Any way you look at it, that’s an incredible — and very collectible! — list. 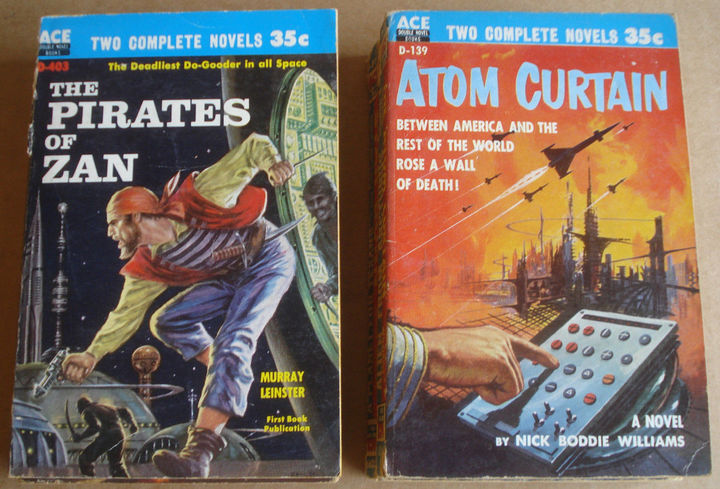 Third, there’s a certain mystique about the Doubles, especially for casual collectors. I almost never came across the older ones in used book stores, and the ones I did find were exorbitantly priced, especially in good condition. When I had them to sell at conventions, I would usually start the D-Series Ace Doubles (the oldest SF titles, and all the ones shown on this page) at around $10, and I usually sold out of everything I had in stock.

And the most collectible of the lot — such as the Asimov, Robert E. Howard, and Phlip K. Dick titles — would get snapped up at $35 a pop.

But despite the perception in the market, the older Ace Doubles aren’t actually all that rare. True, they were hoarded and collected, and long-time collectors were loath to part with them. But that just means that there are a lot of them out there, and that when they come on the market, they’re often in fair-sized lots, offered in an estate sale by someone who just wants to get rid of them. 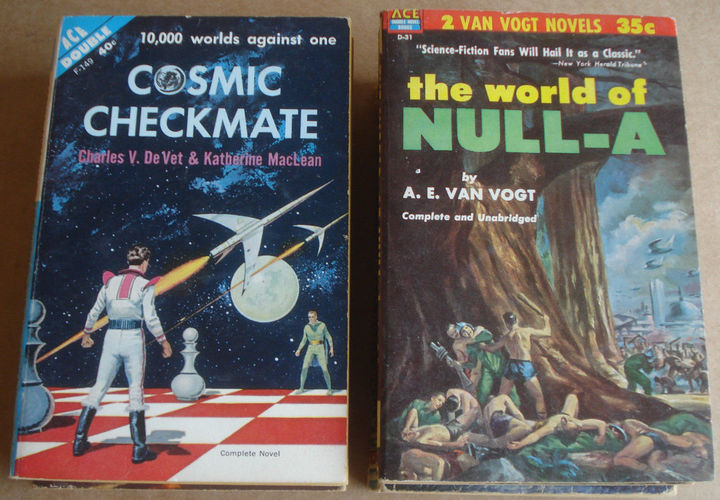 That means that a buyer that knows where to look — such as online auction sites like eBay — can reliably pick up nice lots of Ace Doubles in great condition. And a seller who knows where to sell — such as at SF conventions — can move them at a nice premium.

For example, I bought the lot below on eBay two weeks ago. It contains all the Doubles shown above, and others. Many are titles I’ve personally sold for $10 each (and above) at conventions over the years. I won the auction for $11, or just $1 per book. 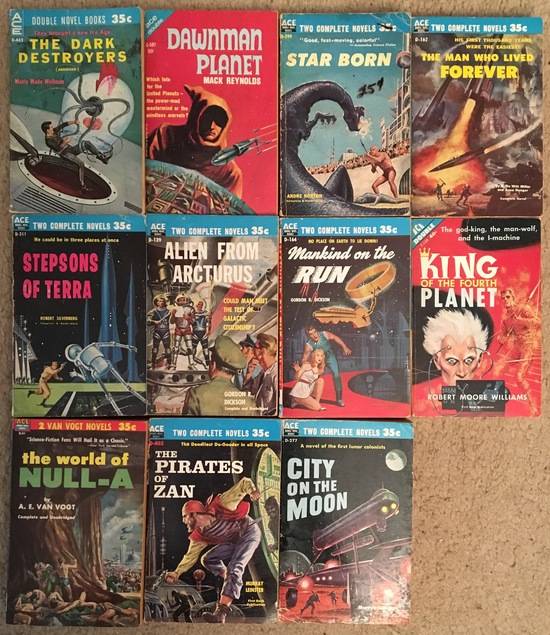 I don’t know if I’ll sell these yet, or just cherish them and cuddle them, and then put them in bags and bury them in the basement. Could go either way.

But if you’re the kind of person who has a fondness for vintage paperbacks, and also has a keen eye for a business opportunity, I think there’s one to be had here. I don’t attend that many science fiction conventions these days, and the ones I do attend don’t seem to have many paperback sellers in the Dealer’s Room any more. But the appetite for vintage science fiction books is still very much alive among SF readers, and experience tells me they’re more than willing to pay a premium for highly collectible paperbacks from the right authors, and with the right cover artist.

The Ace Doubles, as a rule, had both. They’re certainly not the only way for an enterprising book buyer and seller with a keen eye to make a profit, but they make a great start.

Here’s the flip side of that collection above. 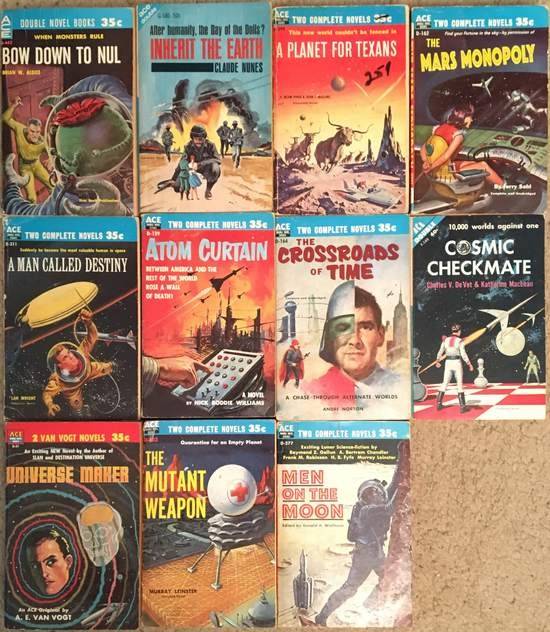 And since everyone seemed to appreciate the spontaneous cat pic that resulted the last time I laid a bunch of vintage treasures on the floor, here’s the entirely predictable results of this morning’s efforts in my living room. 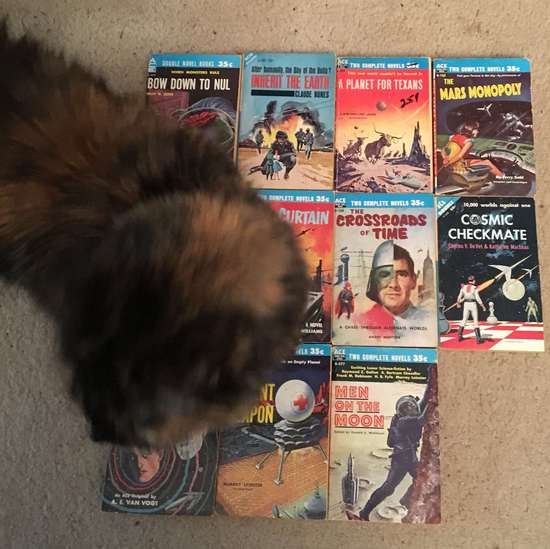 If you’re interested in learning more, our recent coverage of Ace Doubles includes:

Ace doubles are the most wonderful books in the world, and really are amazingly easy to get a hold of. You can build quite a nice collection for a modest amount of money. That is, they were, until you let the cat out of the bag, John…

Just trying to nurture that all-important next generation of convention booksellers, Thomas. 🙂

I’ll have to avoid the conventions you go to. If I pass by a table like that I won’t have money left to buy food.

That’s a nice buy. It’s amazing how fast an Ace Double collection can grow with only reasonable effort. My biggest issue is locating ones in good condition this side of the Atlantic. But I will persevere and hopefully come across a box at a bargain price in the back of a school fête or such:)

> If I pass by a table like that I won’t have money left to buy food.

I know exactly what you mean! At Worldcon in Chicago, our booth was right across from Rich Warren and Arin Komin’s Starfarer’s Despatch booth, sellers of high quality paperbacks, and for a while it seemed like I was going to buy nearly as much as I sold….

That’s the spirit! You never know what treasures you’ll find if you keep looking. Good hunting!

Didn’t the Ace Double’s line come out when Donald A. Wollheim was still with them? I seem to remember reading that he was involved.

He certainly did! Don created the Ace Double, and in fact was the founding editor of Ace. Before that he was paperback editor at Avon, where he brought an enormous amount of SF and fantasy into print. He left Ace in 1971 to found DAW, which quickly became the most important paperback publisher in the field.

Very much enjoyed your writing on Ace Books. I have been reading and collecting since, oh about 1964. And have a number of books I want to downsize. Let me know if you are interested.