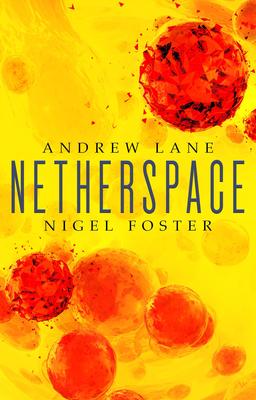 There’s a host of space opera out there at the moment, but in my opinion far too much of it suffers from the Star Trek syndrome — aliens who are basically just humans with a little make-up. Everyone speaks English, there’s no miscommunication, and those strange methane-breathers from that swamp planet turn out to be not too much different from your neighbors down the street.

That’s not the way the best SF treats aliens. I prefer my aliens with a bit more mystery, and thankfully there a still a few writers who agree with me. The hit movie Arrival, based on the famous short story by Ted Chiang, is a great example. And so is the upcoming novel Netherspace, by the writing team of Andrew Lane (Young Sherlock Holmes) and Nigel Foster (On Polar Tides). It arrives in trade paperback from Titan Books next week.

Contact with aliens was made forty years ago, but communication turned out to be impossible. Humans don’t share a way of thinking with any of the alien species, let alone a grammar. But there is trade, an exchange of goods that produces scientific advances that would have taken a thousand years. The cost for these alien technologies has no discernible pattern: an apple core, Tower Bridge, a used fondue kit, a live human…

Kara’s sister was one of the hundreds exchanged for the alien netherspace drives, faster-than-light technology that has allowed humans to colonize the stars, and she has little love for aliens. But when a group of colonists are captured the ex-army sniper is reluctantly recruited into the hostage team. Her role in the group is clear, less so is Marc Keislack, a multi-media artist made famous by the aliens unexplained interest in his work.

With humans reliant on alien technology the mission requires a careful balance, but how can you negotiate when you don’t know what your target wants, or why they took your people in the first place?

Netherspace will be published by Titan Books on May 2, 2017. It is 379 pages, priced at $14.95 in trade paperback and $7.99 in digital formats. It is the first volume in a proposed new series. See pics from the book luanch party at Winstone Books (where the authors met) here.