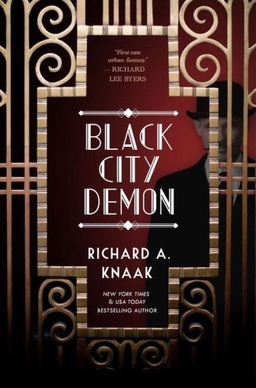 Black Gate is very pleased to offer our readers an exclusive excerpt from Black City Demon by Richard A. Knaak, published by Pyr Books in trade paperback on March 14. Richard A. Knaak is the New York Times bestselling author of some three dozen novels, including The Sin War trilogy for Diablo and the Legend of Huma for Dragonlance.

A chill wind rose up. I tightened the collar of my overcoat and looked around. Diocles’s presence had left me with no more desire to be here. Besides, I had an appointment farther on the North Side — a young couple called the Nilssons who continually heard footsteps on the upper floor of the old house they rented. They thought it was the ghost of the first owner, who’d hung herself after her husband perished in the Great Fire.

I knew better. It wasn’t a ghost. If they’d seen my ad, seen the offerings of Nick Medea, investigator and debunker of the supernatural, then they had a far worse problem than ghosts. They had one of the Wyld lurking around their home.

There was plenty of time to reach my clients, since the appointment was set — for more than theatrical reasons — at midnight. It wasn’t hard to convince anyone who needed my services that I needed to come at the witching hour. They’d be desperate for any help at this point, no doubt having exhausted the usual charlatans.

“There was a visitor to Saint Michael’s this evening,” Diocles muttered.