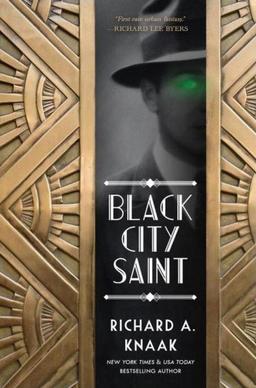 Blending genres seems to be all the rage these days… but nobody does it like Richard A. Knaak. His latest is a historical urban fantasy gangster horror novel, which combines action, mystery and even romance — quite a trick. Brian Staveley, author of The Emperor’s Blades, says “Black City Saint is jam-packed with awesome – cursed Roman emperors, incorporeal dragons, paranormal detectives, a shapeshifter from the Feirie realm trapped inside a dog’s body, and one very tormented unsaintly Christian saint — all set in prohibition-era Chicago… a brilliant mash-up of Ghostbusters, The Da Vinci Code, and the ancient story of St. George and the Dragon.”

For more than sixteen hundred years, Nick Medea has followed and guarded the Gate that keeps the mortal realm and that of Feirie separate, seeking in vain absolution for the fatal errors he made when he slew the dragon. All that while, he has tried and failed to keep the woman he loves from dying over and over.

Yet in the fifty years since the Night the Dragon Breathed over the city of Chicago, the Gate has not only remained fixed, but open to the trespasses of the Wyld, the darkest of the Feiriefolk. Not only does that mean an evil resurrected from Nick’s own past, but the reincarnation of his lost Cleolinda, a reincarnation destined once more to die.

Nick must turn inward to that which he distrusts the most: the Dragon, the beast he slew when he was still only Saint George. He must turn to the monster residing in him, now a part of him… but ever seeking escape.

The gang war brewing between Prohibition bootleggers may be the least of his concerns. If Nick cannot prevent an old evil from opening the way between realms… then not only might Chicago face a fate worse than the Great Fire, but so will the rest of the mortal realm.

Black City Saint will be published by Pyr Books on March 1, 2016. It is 383 pages, priced at $18 in trade paperback and $11.99 for the digital edition. The cover was designed by Jacqueline Nasso Cooke.

After the last book I gave a chance despite its blurb mentioning The Da Vinci Code, I would hesitate to read any book whose publicist was reminded of Dan Brown. For the book’s sake, as much as my own.

I wonder what the ratio is of readers gained to readers lost when publicists invoke Dan Brown. Ah, well. They know their business.

I know exactly what you mean. My eyebrow arched a little at the reference too.

In all fairness, it was a reviewer, Brian Staveley, who made the comparison, not the publicist. But your point is certainly well taken.