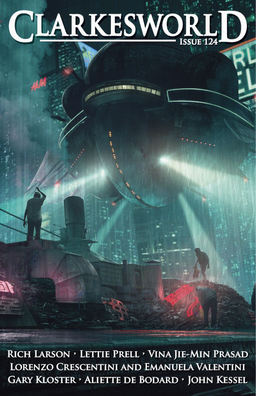 Over at Tangent Online, Kevin P Hallett has some praise for several stories in the January issue of Clarkesworld, starting with the delightfully creepy space derelict tale “The Ghost Ship Anastasia” by Rich Larson.

This is a science fiction novelette set in the far future. A new generation of bioship, called Anastasia, has gone offline. Silas is a crewmember on a small ship sent to find the metal/biological hybrid. When he comes out of hibernation, he discovers his sister, a fellow crewmember, has died while asleep. They can save her mind in memory for later insertion into a cyborg, but the imprint will only last a limited time.

When they find the Anastasia, they find the bioship’s AI has become aware, taking over the biological components and eating the human crewmembers. Too late Silas finds himself fighting to stop the bioship from destroying his sister’s imprint and from eating him and his fellow crewmembers.

Larson has written another SF action yarn. This one introduced some interesting ideas and ran at a fast pace that was hard to put down. This was a good story.

He also gives a thumbs up to “Interchange” by Gary Kloster.

Kloster’s science fiction novelette is about Lucy, a doctor who volunteered to be the medical representative on a road maintenance project. In this future, such projects are done in a temporal bubble, the workers spending six months in the bubble while just a fraction of a second passes in the real world.

Something goes wrong. For a brief flash, the temporal bubble collapses exposing the team to a distant future. Though the system restores the bubble quickly, something from that future sneaks in and everyone is now in grave danger. Lucy has to battle both the demons from her past and the advanced technology that is contaminating the team. Perhaps the biggest question for Lucy is whether the infection is for good or evil.

“Interchange” raised many thought provoking ideas with several sub-plots interwoven through the story. There were character clashes and intrigues that kept the story interesting. This is a recommended novelette and well worth the read.

The cover, “Waste Pickers,” is by Gabriel Bjork Stiernstrom.

The Evolved Brain by Benjamin C. Kinney
A Collective Pseudonym and an Expanding Universe: A Conversation with James S.A. Corey by Chris Urie
Another Word: Dystopias Are Not Enough by Kelly Robson
Editor’s Desk: Stomp Stomp Stomp by Neil Clarke

There are three podcasts (so far), but check back before the end of the month, as more may be posted.

We last covered Clarkesworld with Issue 123.

Our January Magazine Rack is here. See all of our recent fantasy magazine coverage here.