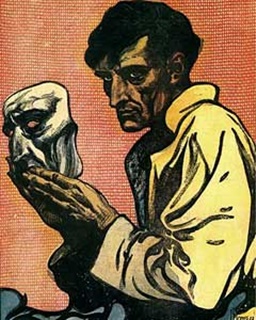 Last week I wrote about the season four opener of BBC’s Sherlock, which was an improvement on season three and the abysmal Abominable Bride. But the second episode was yet another huge disappointment, so I’m not going to bother with a negative post about it. However, I’m going to talk about the Canonical story it was based on.

Appearing in December of 1913, it was the forty-sixth Holmes story to be published. It was one of just eight stories included in His Last Bow.

SPOILERS – I’m going to talk about a story that’s been out there for over one hundred years. And it features the most popular fictional character of all time. If you REALLY don’t want to be tipped off, jump over here and spend fifteen minutes reading it. You have been warned!

Holmes starves himself, looks ghastly, lays in bed, insults Watson, the villain comes over, helpfully confesses, is arrested and Holmes reveals that the was faking it. Yep, that’s the whole thing. Holmes lies in bed for all but a few seconds of the story (he jumps up to lock Watson in the room). No deducing, no finding clues, no nothing. His work in trying to pin a murder on Culverton Smith all happens beforehand.

Now, Mrs. Hudson does go to Watson’s house to get him. And Watson visits Smith to ask him to come aid Holmes. But otherwise, the whole story takes place in Holmes’ bedroom. To me, it feels like a play. Sort of reminiscent of “The Mazarin Stone” (which was both a bad story and a bad play, The Crown Diamond). For dramatic effect, this might well work better as a play than a short story! 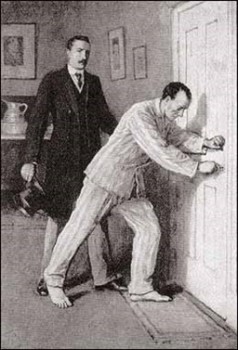 Walter Paget was a successful artist, with editions of Robert Louis Stevenson’s Robin Crusoe and Treasure Island among his credits. But Strand art editor W.H.J Boot simply addressed the commission to draw for Doyle’s stories to ‘Mister Paget.’ Walter and his older brother Sidney both shared that address and Sidney got the letter. It turned out to be one of the best mistakes in the history of literature.

One wonders how the brothers discussed this mistake, and if there was ever any thought of Walter taking over the assignment. Sidney drew for the first six stories of The Adventures of Sherlock Holmes. They were so successful that publisher George Newnes ordered six more from Doyle, and The Strand retained Paget. Interestingly enough, Walter would play two roles in the history of Holmes in pictures.

In 1913, after his brother had died at only 47 years old, Walter himself would get the assignment originally intended for him and would provide the drawings for “The Dying Detective.” I think Walter drew some pretty good pictures for this one. One showed Holmes, in his pajamas, leaping to the door to prevent Watson from seeking medical assistance and messing up his plans.

Sidney often used his sibling as a model for his own drawings. His younger brother was generally reckoned to have handsome features, and it is his visage that Sidney copied for Mister Holmes. Sir Arthur actually thought that the Paget brothers combined to make Sherlock Holmes too handsome. Walter both modeled for and drew Sherlock Holmes, but it is his younger brother Sidney whom we remember.

Frederic Dorr Steele illustrated the story in America for Collier’s. While the vibrant color covers he drew are his best-known Holmes illustrations, the interior drawings often featured a great deal of black or gray background, as in this depiction of Watson visiting Smith. 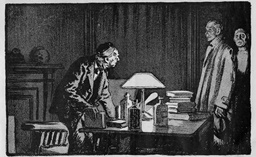 Lee Conrey drew a strange picture for the Seattle Post Intelligencer, in which Holmes holds a death mask. I’m sure it’s very allegorical or something like that.

The Dying Detective was included among Eille Norwood’s series of silent films, as well as a talkie by Alan Wheatley. I’ve not seen either. Of course, episode two of season four of BBC’s Sherlock was based on the story. I think that Jeremy Brett’s version for Granada, actually improves upon Doyle’s original story.

Sadly, Jeremy Brett’s ill health was all too obvious and he would be dead in just a year and a half from the show’s airing. Filming had been delayed because Brett was in the hospital. He collapsed during the end of shooting party for Dying Detective and was admitted to a mental hospital to try and recover his shattered health. 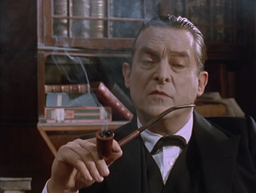 Of course, Holmes is supposed to look like he’s on death’s door, but Brett bears little resemblance to the lean Holmes of the early series.’ It is not one of his best performances. However, Jonathon Hyde, in a non-Canonical casting, is an excellent Culverton Smith. And Hugh Bonneville, well ahead of his Downton Abbey days, is a young Victor Savage.

I think that the Granada version is superior to Doyle’s original short story. The first 33 minutes are about the backstory: what happened to Victor Savage and why Holmes believes Smith is to blame. Most of the final 17 minutes cover the events that Doyle relates. There is much more going on, there is more for Holmes to do and, quite frankly, it’s much more interesting.

Susannah Harker had a key role as Savage’s wife. Three years previously, she was the female lead in Charlton Heston’s Crucifer of Blood. I thought she did quite well in that one.

All in all, I would rather watch Granada’s version than read Doyle’s original tale. And I certainly prefer it to Benedict Cumberbatch’s version (which wouldn’t have been so bad without the end twist that Moffatt and Gattis can’t seem to resist.)

A very good post, Bob, I enjoyed it a lot. I’ll have to go back and watch that Brett episode again. I read the story not 3 months ago.

If I may, a suggestion for a future post: Ten Years Beyond Baker Street by Cay Van Ash. Your opinion of the book, whatever it may be, and why. I hope to see such a post.

R.K. – Ash’s book has been on my shelf for at least a decade, but I haven’t read it yet. Not sure why…

OK, so the story is basiccly like the episode they made out of it Sherlock. No wonder it was bad (teh episode) –
People read and watch Sherlock because of the mystery. If there is no mystery – the villian is known, its known that Sherlock knows him – there is not much left to enoy (in Sherlock I liked the episode until about they entered that Hospital. Then deducing stopped and so did everything I used to enjoy about the show)