We — well a mate and I  — call it the Arrow Storm. It’s like Seth Godin’s Dip, but different. The experience looms large in the lives of professional creatives, but it’s not unique to us. Let me explain.

Imagine you’re a knight. Your enemies are a bunch of  peasants on top of a hill. Once you get amongst them with your sword, they are almost literally mincemeat:

[The peasants] shouted out, and cried, “Put him to death.” When he heard this, he let his horse go; and drawing a handsome Bordeaux sword, he began to skirmish, and soon cleared the crowd from about him, that it was a pleasure to see.

Some [peasants] attempted to close with him; but with each stroke he gave, he cut off heads, arms, feet or legs. There were no so bold but were afraid; and Sir Robert [Salle] performed that day marvellous feats of arms. These wretches were upwards of forty thousand… he killed twelve of them, besides many whom he wounded. (source)

Whee! And that’s just one (doomed) knight without any armour or backup. In this scenario, you are advancing with your comrades and you have you armour.

Unfortunately, these peasants are armed with longbows.

It’s the later middle ages — stay with me here — so the arrows won’t actually pierce your plate armour. They will, however, skewer through any gaps in the joints or eye protection.

So you (and your comrades) must take up big shields — pavises –, close your visors, and advance uphill into a storm of arrows. If you can get to the top uninjured, you can prove your worth by smiting the peasants.

As you stand just out of range, preparing to attack, a noncombatant friend bounds up and says, “You can do this! I believe in you!”

You shrug, making your shoulder plates rustle metallically. “I’ll keep my shield up, but it’s in God’s hands.”

Yes, it would be nice to be certain of your survival, but you aren’t in control of the situation. It’s not like, say, marathon running, where you are really the only variable. In this case other people are trying to kill you. You can’t affect what they do. And a realistic appreciation of the opposition will serve you better than false confidence.

Your friend isn’t satisfied with your response. “Come on!” he cries. “Rah! Give me a high-five!” And starts trying to lead you into performing a haka.

Some of the other knights turn to stare.

You smile weakly as if to say, “Never seen him before in my life.” The truth is that pumped up mojo would do you no good. The arrow storm is just too impersonal for personality to count. It would, however be emotionally exhausting, since the arrow storm can last a very long time.

Fortunately, a naked guy turns up to distract everybody.

“What?” exclaims Naked Guy. He waves his bronze sword. “This is how it’s always been done. I’m the only proper warrior here.”

He certainly knows his history, but you decide to stay clear of him during the advance in case you get blood spatter on your armour.

Your friend gives up on the haka and leans closer. “I read about this knight who got through the arrow storm using a special throat protector.”

You sigh and rap your gauntlet against your gorget. “That would be this piece of armour.”

Unabashed, your friend has yet more advice. He indicates your leather boots. “Shouldn’t you be wearing metal foot protection?”

“A judgement call,” you say. “Without my sabatons I’m faster so less chance of getting hit.”

“But more chance of getting an arrow in the toe,” says your helpful friend.

You wince as your mind spirals through all the similar difficult decisions. With limited money, you opted for a better helm than breastplate. You’ve saved weight by ditching the spear, which will be fine if you can close with the archers. Less so if you have to fight over  a barricade…. now you’re starting to second-guess yourself and the sweat pours down your face.

Your friend moves onto recommending that you remember to close your visor, and that you whirl the sword over your head like in that movie he saw. “Round and round,” he urges.

Thankfully, a concerned relative rushes up to interrupt. You brace yourself for another round of, Gosh this looks dangerous! Wouldn’t you be better with a nice safe job? Instead they gush, “I just read a newspaper interview with a knight who got humongously rich through marriage with an amazon. Perhaps you could also marry an amazon…? You should talk to your cousin’s girlfriend. She once saw a tournament so must know all about battles…” 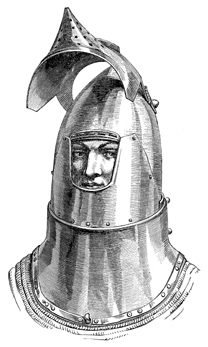 Before you can answer, a priest’s voice carries over the throng of knights, “You should save yourselves for a serious battle, one that means something. Why are you wasting time here, when you could be taking part in my crusade?”

You were starting to feel scared. Now you are also feeling vaguely guilty.

At last the trumpets sound and five thousand knights tramp uphill into the teeth of a hail of bodkin-headed arrows that thud into your pavise in such quick succession that it’s like carrying a slice of living thunder.

As you step over the dead and dying, avoid ankle-breaking rabbit holes, and fight to keep your pavise up, you return to the only sustainable mental state: optimistic resignation, which is as good as it gets as long as you don’t accidentally hold your breath.

You have strategies but not expectations, hope but not entitlement. You’ve also already done your homework and made the best choices that you can. However, there is no getting around the fact of having to slog uphill through that very arbitrary arrow storm. God willing, your sword will spill blood by the end of this day. If not, then you will try not to bleed too much as you drag yourself back downhill to start again…

And that, my friends, is what it’s like being a writer — or any other sort of professional creative — trying to get to the next level. Only less heroic.

M Harold Page is the Scottish author of works such as Swords vs Tanks (Charles Stross: “Holy ****!”)! For his take on writing, read Storyteller Tools: Outline from vision to finished novel without losing the magic. (Ken MacLeod: “…very useful in getting from ideas etc to plot and story.” Hannu Rajaniemi: “…find myself to coming back to [this] book in the early stages.”)  His agent is currently shopping two big projects for him…

Yeah, there was a time when you could just march up that hill and use your rapier tongue to cut your detractors down to size. Very few of their comments penetrated your iron self-belief. But now the internet has made them sharper. More deadly. So it goes!

I was probably being too clever! The analogy was supposed to be: sooner or later you have to put your work out there and hope a publisher will take it or that indy publishing will work for you. You can do a lot to prepare yourself properly – and you probably know more about it than well-meaning friends and family, who should probably stop “amsplaining” or trying to pump you up – but even so there is a huge element of chance over which you have no control.

Just running with the analogy, MHP – ie, not taking a shot(!) at you.

I started your piece thinking – ‘Ah, but the longbow changed the ground rules in THAT regard’ only to discover that was precisely what you were intending to talk about. So if anybody was being a bit too clever for his own good, it was me.

I also learnt something useful (I always thought the longbow could actually pierce armour: I was wrong).

Oh it could, back in 1346. By 1415, it mostly couldn’t – unless you were wearing cheap stuff, or old kit that had thinned due to polishing. However, nor could you easily advance on horseback unless you had very expensive horse armour as well.