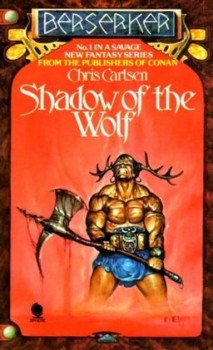 Robert Holdstock is best known for his Ryhope Wood series that started with the 1981 novella “Mythago Wood,” later expanded into the 1985 World Fantasy Award-winning novel of the same name. He would go on to write another six books in the series before his untimely death in 2009. I have only read the novel Mythago Wood, but recommend it highly. It is a fascinating excursion into England’s myths, Jungian archetypes, and damaged familial bonds.

Many readers of the Ryhope books, a series lauded for its psychological depth and poetic style, don’t know that Holdstock wrote at least fifteen earlier novels under various pen names. As Richard Kirk, he contributed to the bloody Raven series (the first of which I reviewed here). His Night Hunter horror series, written as Robert Faulcon, ran to six books. Today, I’m going to look at Shadow of the Wolf (1977), the first of the Berserker trilogy of swords & sorcery novels set in historical Europe, and written under the name Chris Carlsen.

Harald Swiftaxe is a young Norse warrior raiding Ireland for the first time. Despite participating with nearly as much fury and relish as the rest of the warband he belongs to, he lets a monk live out of an odd sense of mercy he doesn’t understand. When he doesn’t rape a woman and kill her child, one of his companions nicknames him “the Innocent.”

Harald is a bit of an innocent, at least as innocent as a red-handed brigand can be. He may be a Viking at heart, primed and ready to kill and pillage, but he also longs to return to his father’s comfortable steading and Elena, the girl he plans to marry.

After leaving Ireland’s shores, Harald heads first for Elena’s town. Instead of a place of warm welcomes, he finds it destroyed and its people slaughtered. While he doesn’t discover his beloved’s body, when attacked by a wounded Berserker he does learn who annihilated the town. Even wounded near to death, Harald’s assailant almost proves too tough for him, but the young Viking survives and kills the raider.

With the Berserker’s head in a bag, Harald rushes to his hometown to warn his father. He discovers Elena there, safe from harm, but also a band of six Berserkers. Perhaps out of fear, perhaps because of sorcery, Harald’s father has given them leave to stay there. Convinced they are the men who destroyed Elena’s village, Harald confronts them with the head.

Enraged, the Berserkers hold themselves, waiting for the perfect time to strike. When they do, it is not just to revenge themselves on Harald, but to destroy his soul. They summon up the power of Odin, asking he make Harald one of them. The one-eyed god takes them into Valhalla, the hall of the dead, where he makes his conditions known: if he is given an acceptable sacrifice he will transform Harald, if not he will kill them all. 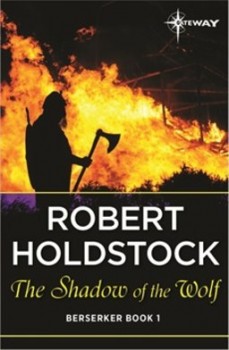 Finding the offering worthy, Odin makes the young man a Berserker and lets him loose on his own people. At the scent of blood and the sound of battle Berserkers change, taking on an ursine appearance and flying into an uncontrollable rage. Now one of Odin’s cursed warriors alongside his new companions, Harald wreaks havoc on the people of his own town.

When Harald finally regains a degree of self control, he is once again in Ireland. He and his new companions, the six Berserkers, have traveled there to participate in a war on the forces of Queen Deirdre. After a terrible battle, he manages to extricate himself in hopes of finding a way of breaking Odin’s horrendous curse.

The latter half of Shadow of the Wolf is where it shines most brightly. It’s at this point the Holdstock of Mythago Woods begins to rear his head, or at least his pen. Part of what encourages Harald to seek release from his burden is realizing the magical power of the land he’d come to ravage. While there are passages of attention-commanding prose earlier in Shadow of the Wolf, a deeper sense of the world’s ancient, mystical past starts to become omnipresent.

Wandering the countryside, Harald comes into a valley where he finds the great burial mounds of the Tuatha de Danann, “the magic warriors of the Celtish past.” As he continues walking among the barrows, the land seems to change, and strange figures emerge, reenacting their lives around him:

All during the night, as Harald felt the cold creep through even the double layer of clothing he wore, small bands of Tuatha emerged from the deep earth around their final resting places. Whooping and yelling they rode or ran across the land of their children’s children’s children, chasing the moonshadows of ancient foes, or acting out, with all-too-audible clash of bronze sword against bronze sword, the great fights of their lifetime. Then elven folk and the lumbering trolls lived among them, in the rocks and woods, before they withdrew to nestle high in the mountains of Harald’s own land, emerging but rarely, and only when the gods released the lock that kept the over- and under-worlds apart from the mortal world of humans.

Seeking out a sorcerer he believes can save him from the Sky Father’s curse, Harald rides deep into the mountains of northern Norway. Instead of mundane geological formations, the mountains prove to be one of the world’s most ancient seats of learning. It is a region haunted by strange beings and protected from foolish intruders by death-dealing magics. Between the human and inhuman worlds stands an entranceway made of three great slabs of stone “towering ten times the height of a man”:

Since time immemorial this giant gate had straddled the bronze river, dividing the land of mortal men from the cold, rocky domain of those beasts midway between earth and the supernatural land of the gods. Beyond the gate Harald was an intruder and an invader. His trespass would be punished by death, of that there was no doubt. 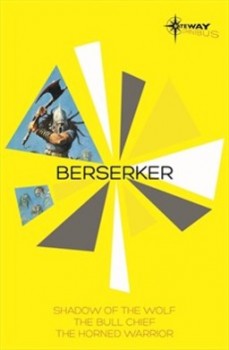 In Shadow of the Wolf, as in Mythago Woods, Holdstock was exploring the roots of myths. Under each story is another, often darker one. Revealed in his sanguinary glory, Odin isn’t a wise, one-eyed wanderer, but a bull-headed killer who spills his seed over the world to bring forth murder and chaos. Irish legends are shown to have a heritage going back over the millennia to early Mediterranean peoples predating the Celts. Made part of this mythic world by virtue of the Berserker curse, Harald becomes increasingly privy to its secrets and deepest truths.

I have neglected to say there’s an incredibly high degree of violence and action in Shadow of the Wolf. The scenes in the earlier, more genre-bound parts of the book are good, though of lesser resonance. We know too little about Harald or what’s going on around him to know why we should care. While Holdstock knew how to write graphic scenes of combat that practically bludgeon the reader, the early ones never quite connect. Only as the action becomes more directly connected to Harald’s fate and he has become more deeply enmeshed in the supernatural world does it achieve greater emotional effect. By then we have a better, more genuine understanding of his nature.

Holdstock’s vision of the Viking age is merciless and dread-filled. The Norse are vicious, murderous bandits, continuously killing and raping their way across Ireland. The Norse themselves live in fear of the gods, no wonder in the face of murderous Berserkers. Haunts and monsters lurk in every shadow, sneaking from behind one tree to another. Men live under curses and the constant fear of sudden violent death. Most often death is unfair and ignoble. I don’t know how accurate it is, but it feels real, stinking of death and fire.

Based on its cover, Shadow of the Wolf looks like little more than a very pulpy S&S novel. To a certain extent, filled as it is with murder, rape, and demonic mayhem, that’s an understandable description. At its heart, though, Holdstock was striving for something greater. In his foreword to the recent Gateway edition, John Clute wrote:

The Berserker books lack the subtleties of Mythago Wood, but in a sense they supply a deep backstory for that tale, and for everything else that Holdstock would write. They are the bone shop. It is a thrill to encounter them properly at last.

I don’t think I could end my review with more perceptive words.

Oh, and the other two books are titled The Bull Chief and The Horned Warrior. I am now officially looking for them.

Excellent review, Fletcher. You captured exactly why I felt these books are special. Yes they are pulpy(a good thing!) and yes there are scenes of extreme violence and brutal rape, but it is all brought together with some genuinely excellent writing. I really like this series and they deserve to be republished and thus a wider audience to appreciate this early work by a fantasy master. Don’t let the cheesy cover art fool you; this is some of the best S&S ever written.
It’s been a little while since I read my copies, and I really ripped through them. Time for relaxed re-read so I can soak up the finer details. (P.S. I will keep an eye out for the other two books!)

Thanx. I wasn’t surprised I liked it, but how good the good parts really were.

They look like they were never published in the US, only the UK. In the last year or so, Gateway republished them in an omnibus that’s reasonably priced used on Amazon US.

I just did a quick search on Amazon.ca, and sure enough the omnibus collection is available new for around $20 Canadian. I was not aware of this edition being available in Canada, so I may have to nab a copy to compliment my original paperbacks. Cool!

I saw a complete set of the original paperbacks on ebay a few months ago and let them slip through my fingers. I was disappointed them and even more so now.