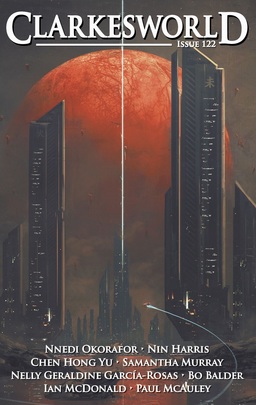 I checked Tangent Online this morning to get their thoughts on the current issue of Clarkesworld, but their review isn’t up yet. Phooey. Fortunately, Charles Payseur at Quick Sip Reviews posted an enthusiastic review this week. Here’s his overview:

It’s another packed month at Clarkesworld with six original stories, including a rather charming novelette in translation. And it’s another month that is entirely science fiction, with a splash of science-fantasy thrown in for flavor. These are tales that show visions of the future, conflicts playing out for the soul of humanity and for the fate of planets. Many of the stories take their focus off of Earth to show what humanity is capable of, the way that it can move from place to place, leaving a trail of destruction behind it. There’s hope, though, too, and the stories also show the power that humanity can hold to create and to change and to love….

Yeah, Charles knows how to whet your appetite. I’m especially curious about that “charming novelette in translation,” which turns out to be “Western Heaven” by Chen Hongyu, translated by Andy Dudak. Here’s what he says (in part).

Aww. This is a rather adorable adventure story about a robot artist, Wu Kong, on an Earth still deeply tainted from humanity, who wants to see where humans went, the planet that they fled to in order to escape the destruction they had wrought, leaving the robots behind, abandoned. Wu Kong gathers up a small band of robots to accompany him and together they work to find where humanity went and answer the questions burning within them. What are humans like? What is the meaning of work? Why were robots created? It’s a story that moves along with a rather chipper feel, this great adventure that the robots are going on. It almost feels like an old animated film to me, fun and with robots with distinct styles and voices… An excellent read!

Here he is on “Afrofuturist 419” by Nnedi Okorafor, just because I love his one-line story description:

Well this is a very fun, funny, and creepy story about a Nigerian astronaut left in space for 14 years and finally coming home because of a viral scam letter… It’s another short work but it’s an excellent blend of audio and text, tension and mystery, horror and humor. Go read it!

“What The Stories Steal” by Nin Harris
“Where Water Joins” by Nelly Geraldine García-Rosas
“Of Sight, of Mind, of Heart” by Samantha Murray
“Follow the White Line” by Bo Balder
“Western Heaven” by Chen Hongyu
“Afrofuturist 419” by Nnedi Okorafor
“An Eligible Boy” by Ian McDonald (from Fast Forward 2, 2008)
“Reef” by Paul McAuley (from Skylife: Space Habitats in Story and Science, 2000)

Kubrick to Scott: Relevancy and Realism in Cinematic Science Fiction by Mark Cole
Bioengineered Athletes and True Stories: A Conversation with Lauren Beukes by Chris Urie
Another Word: On Saying No by Sarah Pinsker
Editor’s Desk: Your Mission by Neil Clarke

There are two podcasts (so far), but check back before the end of the month, as more may be posted.

We last covered Clarkesworld with Issue 121.

Our November Magazine Rack is here. See all of our recent fantasy magazine coverage here.