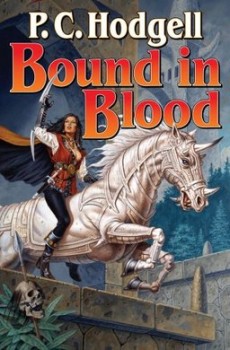 With Bound in Blood (2010), P.C. Hodgell continues to blow me away with her talent for telling tales. It’s the fifth book in the Kencyrath series, and the second one about our heroine Jame’s time at military school, the randon academy at Tentir. It’s not the most compelling novel so far. In fact, it’s more of a collection of stuff that happens to Jame or stuff she does. That the book manages to hold a reader from cover to cover proves just how good Hodgell is.

Thirty thousand years ago, Perimal Darkling began to devour the series of parallel universes called the Chain of Creation. To fight against it, the Three-Faced God forged three separate races into one: feline-like Arrin-Ken to serve as judges; heavily-muscled Kendar to serve as soldiers and craftsmen; fine-featured humanoid Highborn to rule them. For 27,000 years, the Kencyrath fought a losing battle; one universe after another falling to the darkness. Three thousand years ago, the High Lord Gerridon, fearful of death, betrayed his people to Perimal Darkling in exchange for immortality. Fleeing yet again, the Kencyrath landed on the world of Rathilien. Since then, they haven’t heard from their god, and Perimal Darkling has seemed satisfied to lurk at the edges of their new home. Monotheists trapped on an alien world with many gods, the Kencyrath have had to struggle to make a life on Rathilien.

Now, the power of the Three-Faced God seems to be reappearing. The Kencyrath believe that only the Tyr-ridan, three Highborn reflecting the three aspects of their god — destroyer, preserver, and creator — will be able to defeat Perimal Darkling. Jame, raised in the heart of Perimal Darkling, is fated to be the Regonereth, That-Which-Destroys.

In the previous book, To Ride a Rathorn (review here), Jame, who’d been named by her brother, Torisen, the Highlord, as his heir, had been enrolled in the military school to train in leadership and personal combat. By the end she’d made her usual mark on the school, creating havoc but upending everyone’s expectation that she wouldn’t last a month. Instead, she’d done well enough to survive multiple culls of the student body, and learned new fighting styles. She’d also uncovered the causes of the terrible events in her family’s past, particularly her father’s mental instability. Jame continued to expose the ways powerful Kencyrath traditions had become perverted by abuse. 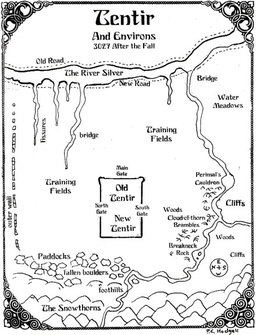 Most of Bound in Blood is taken up with Jame jumping from one event to another. She faces numerous mysteries and obstacles. Some are minor, but some turn out to have potential for tremendous consequences. In Rathorn, she had begun to suspect that the death banners woven to commemorate the High Born dead perhaps served instead to trap their spirits. Now, the blood-stained coat of her despicable late uncle Greshan seems to be destroying someone close to her. A clash with one of her cadets over perceived favoritism turns out to have a graver cause. A barbarian chieftain’s entanglement of Jame in his tribe’s annual rituals in Rathorn takes on deeper importance in Bound, and puts her at more serious risk than she’d anticipated. Still, bad dreams and bruises aside, she continues to hang on and successfully fight to maintain her slot in the academy.

One of the strands running through all of the books since the second, Dark of the Moon, has been that many of the High Born treat poorly those bound to them in service, especially the Kendar. This has led to ills including employing them wastefully in battle and taking advantage of them sexually. From the very first days of her arrival among the Kencyrath, Jame has pointed this out and attempted to thwart the worst abuses she encounters.

In Bound, she finds herself struggling unsuccessfully to prove an honest mistress to the half-High Born, half-human, Graykin. A broken and maltreated young man, he has sworn allegiance to Jame, sensing in her an indomitable will to succeed, and concomitant success for himself. His scarred personality, though, proves too trying for her and she practically abandons him. Her rejection causes his psyche further damage, and her failure of oversight leads to a terrible crisis, both for the college and Jame herself.

Rathilien continues to be revealed, for both the reader and Jame. When the hill tribe, the Merikit, were first introduced in Dark, they seemed little more than barbarians from central casting. As time’s gone by, they have become considerably more nuanced. In this current installment we get a full look at their society. Completely unknown to Jame, and presumably to the rest of the Kencyrath, it’s a complicated matriarchy, with rules for polygamy and polyandry. They also have a very close working relationship with the Earth Mother, Rathilien’s earth goddess, as does, increasingly, Jame.

Many disparate events come together during Bound‘s concluding sequence, the Winter War. Each year, the three main Highborn houses choose allies from among the smaller ones, and wage what’s essentially a game of capture the flag. While no weapons or killing are allowed, each cadet is a highly skilled martial artist, and several of them have the ability to control certain animals. Feuds, ancient revenge, and everyone’s plain old desire to win smash together, leaving almost no one untouched by the war’s end.

Despite the frequent feeling that I was picking up breadcrumbs of barely connected events, never once was I unwilling to just follow Hodgell wherever she was going. I have written before that Jame is one of my favorite fictional characters, and this book hasn’t diminished my love for her. She remains funny and insightful, and she also remains willing to push herself.

Hodgell is a great writer of action, both funny and serious. There’s a cattle stampede and subsequent barbarian raid that demands to be filmed. A separate raid by rustlers on the academy’s horse pen results in a pursuit through the dark that had me on my seat’s edge. The scenes during the Winter War involving several cadets’ animals, including an army of fleas, are an absolute delight, and well choreographed. 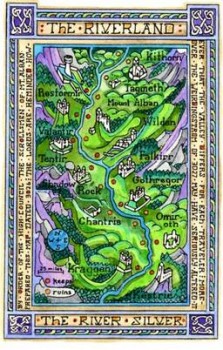 Finally, she continues to underline the ways in which Kencyrath society is broken. While it’s bound by almost inflexible rules and traditions, it’s rife with exploitation. This leads to several scenes of great pathos as the consequences of various misdeeds come to fruition. There are examinations of honor, duty, and loyalty in this book (and the series as a whole), that are fairly weighty and complex for a fantasy novel.

Already one of the most detailed cultures depicted in fantasy, Hodgell continues to paint them with more color and more subtlety. The short sequences with Torisen give a little more insight into the complicated relationships (and feuds) between the various houses, and the continued importance of honor to his people. We even get some understanding of the economics that underlie Kencyrath society.

The only flaw with Bound in Blood is its failure to move the greater plot, that of the struggle against Perimal Darkling, farther along. In fact, it really doesn’t do much with it at all. At most, there’s a sense that Jame is increasingly ready to accept her fate as the Destroyer, and that her brother Torisen is at least starting to come to terms with her.

But I don’t care. I trust Hodgell to get to that story when she’s good and ready. As important as the overarching story is, it’s never gotten in the way of her deeper depiction of character and setting. It’s also clear that a greater understanding of Jame, the Kencyrath, and Rathilien will give the complete story a more profound impact. In the meantime, I’m more than happy to tag along with Jame on her exploration of her people and the world around her. If you’ve been keeping up with this series, this is a fun addition that, while it might tread a little water, doesn’t repeat what’s gone before. More than any other series I can think of, in fact, never once have I felt like I’ve read this before in an earlier volume. In Bound in Blood, P.C. Hodgell continues to prove she’s one of the most inventive, and enjoyable fantasy writers around.

You can read reviews of the previous books in the series by clicking on the titles: God Stalk, Dark of the Moon, Seeker’s Mask, To Ride a Rathorn