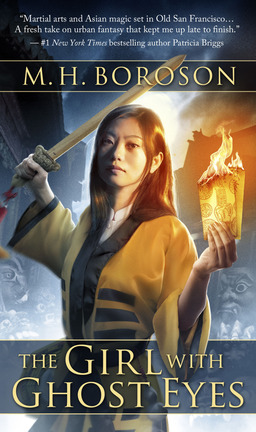 Publishers Weekly called The Girl with Ghost Eyes “A brilliant tale of monsters, magic, and kung fu in the San Francisco Chinatown of 1898.” In her review of the hardcover edition, published by Talos in November of last year, Sarah Avery wrote:

We’re connoisseurs of kickass combat scenes, eldritch lore, and victories won at terrible, unpredictable price. We want our heroes unabashedly heroic and morally complicated at the same time. Add a decade or more of research on the author’s part, distilled to the most concentrated and carefully placed drops, and a well-timed sense of humor, and you’ve got the recipe for the perfect Black Gate book…

Li-lin’s family has protected the world of the living from the spirit world for generations. Most Daoist priests and priestesses take it on faith that their rituals work — they can’t literally see the spirit world and the efficacy of their magic. Li-lin can, though. She has yin eyes, ghost eyes, a visionary ability that appalls her father and would disgust her trusting neighbors if they knew…

Devoted daughter, faithful widow, compassionate protector of Chinatown, Li-lin must conceal her rarest talent, lest she shame everyone she loves. Long practice at concealment, combined with the necessity of bending rules and stories if she’s to be effective in a world where even a warrior priestess is expected to show deference to men and elders no matter what, has prepared her almost too well for the mystery she must solve.

Someone wants her father dead. That someone wants it enough to lay trap after trap for her family. Bad magic is on its way, of the kind only the Maoshan can stop.

Li-Lin and her ghost eyes save Chinatown, don’t you doubt it.

The book and the series to follow it have been optioned for adaptation as a series on cable. Options don’t always lead to projects that get made, but we can hope!

It has a lot of potential as a series, that’s for sure.