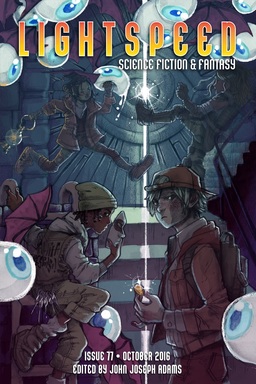 Jeremiah Tolbert has had a pretty impressive short fiction career — in the last few years he’s been published in Asimov’s SF, Giganotosaurus, Interzone, the sword & sorcery Cthulhu anthology Swords Vs Cthulhu, and other fine places. Some of you will also remember his very fine story in Black Gate 15, “Groob’s Stupid Grubs.” His latest tale for Lightspeed is “The Cavern of the Screaming Eye,” a futuristic role-playing tale which he describes thusly:

The first in the Dungeonspace sequence of stories, “Cavern” involves the story of a boy struggling with the legacy of his dead brother, a great d-space crawler lost to one of the most deadly dungeon anomalies the City has ever seen – The Black Hole.

His mother will kill him if he takes up d-space adventuring – she can’t bear to lose another son to the high-risk world of dungeon crawling. But an addiction to the thrill of adventure might just be in his blood, and now he find himself embroiled in the new kid’s dungeoneering schemes. Will they survive… the Cavern of the Screaming Eyes?

This story imagines a future fantasy world where young people can enter into d-space, a sort of dungeon-crawling game, only one where the stakes are life and death. The main character, Ivan, has recently lost his brother to the game, a brother who was a hero to many but a terror to Ivan. His home life a mess, Ivan is surprised when a new kid at his school offers friendship and, more than that, an opportunity to get involved in dungeon delving… This also feels like the start or something larger, because the story introduces many things that don’t exactly pay off. But it does create the sense of a larger world and a larger mystery which Ivan is just discovering, that will undoubtedly have huge implications for him, his family, and his new friends. It’s an entertaining piece and light but with a lifting optimism and fun that makes it a pleasant read and a fine story!

This month editor John Joseph Adams offers us original fantasy by Jeremiah Tolbert and Kat Howard, and fantasy reprints by Aliette de Bodard and Will Kaufman, plus original science fiction by Stephen S. Power and Mary Anne Mohanraj, along with SF reprints by Karen Joy Fowler and Fran Wilde.

The October issue of Lightspeed also features an editorial from JJA, author spotlights, reviews of 12 Monkeys and Mr. Robot by Christopher East, an interview with Allen Steele, and book reviews by Andrew Liptak.

The cover artist this issue is Sam Schechter. Here’s the complete contents for the October issue.

“The Cavern of the Screaming Eye” by Jeremiah Tolbert
“Is that the collapsible, carbon fiber ten-foot pole from TrunchCo—” I slammed my locker door and spun the combo lock, but it was too late; the fanboy already seen my gear. I didn’t know what his interest was, but I didn’t want to encourage him. I said nothing. He continued: “I’ve got the one from a couple of years ago that folds up. It sucks.”

“The Key to St. Medusa’s” by Kat Howard
My parents knew I was a witch before I was born. The signs were there, they told me. They were unmistakable. Well. Not all of the signs, or they never would have kept me as long as they did. But enough: My mother’s hair, previously sedate and well-mannered, turned curly and wild during her pregnancy, sometimes even grabbing forks from other people’s hands at meals.

“The Dragon’s Tears” by Aliette de Bodard (from Electric Velocipede, 2008)
Huan Ho sealed the last window, leaving only a crack in the shutter. Tonight, he thought, his eye on the empty streets, the neighbours’ barred shutters. Tonight he had to pass the door on the hill, or let the sickness take his mother. She had been watching him from her bed. “They ride tonight,” she said, when he was done.

“October’s Son” by Will Kaufman (from Wag’s Revue, 2015)
When my wife began to swell, I wondered what seed infected her womb, my own having long proved fruitless. As she grew, her cravings turned to dirt and water and long spells naked in the yard under the bare trees and what sun pierced the clouds, and I asked her, Who have you loved? Who have you fucked? Why is your belly growing round?

“Fade To Red: Three Interviews About Sebold’s Mars Trilogy” by Stephen S. Power
I’ll be the first to admit that my homemade rover didn’t do the original justice and my color treatment was a better reflection of my Hollywood thinking than of the Martian landscape. What appealed to JPL was how I captured the tension of driving the rover across Gale, where every pebble can put years of training to the test. They were also impressed that I left my Curiosity outside Hanksville, Utah, not far from the Mars Desert Research Station, then controlled it and its cameras from a van several miles away. And they were amazed that my route for approaching the Mars Light almost perfectly mirrored their own.

“Plea” by Mary Anne Mohanraj
Three families ahead of them in line. Many more behind, stretching along the beach; it had taken most of the day to get this far, and Eris’s sun was now setting, casting red-gold rays across the sand. Gwen resisted the urge to remind Jon to stand up straight. Their hosts—potential hosts—couldn’t stand up at all, and there was no reason cetaceans would even notice a human’s posture, much less care.

“Game Night at the Fox and Goose” by Karen Joy Fowler (from What Might Have Been? Volume 1: Alternate Empires, 1989)
Alison called all over the city trying to find a restaurant that served blowfish, but there wasn’t one. She settled for Chinese. She would court an MSG attack. And if none came, then she’d been craving red bean sauce anyway. On the way to the restaurant, Alison chose not to wear her seat belt.

“A Moment of Gravity, Circumscribed” by Fran Wilde (from Impossible Futures, 2013)
Djonn’s father owned the last ticker in the city and made sure everyone knew it. Brass-bodied, the ticker looked fragile and cold, its clouded glass face obscuring the dark symbols beneath. Despite its age, it ticked loud and regular, breaking the arc of a day into increments. “You have thirty ticks to decide,” Djonn’s father said when he made a deal.

NOVELLA: The Stars Do Not Lie by Jay Lake
NOVEL EXCERPT: Faller by Will McIntosh

See our October Fantasy Magazine Rack here, and all of our recent Magazine coverage here.