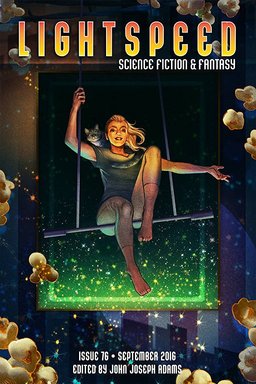 It’s the end of the month, and you know what that means. The complete contents of Lightspeed have now been posted online, awaiting your pleasure. Here’s Charles Payseur’s summary from Quick Sip Reviews.

The September issue of Lightspeed Magazine is all about crime and punishment. About people running from their pasts, running from authority, running from justice or injustice alike. In each of the stories there is a looming threat of some sanction. Police officers trying to maintain a status quo or a corrupt government trying to quash transparency or some nebulous force urging surrender or an actual crocodile waiting for the right moment to… These are stories that complicate crime and resistance, activism and revolution. And though they are unified by their focus on characters running from pursuit, from punishment, they show very different motivations and outcomes…

“Unauthorized Access” by An Owomoyela (10,700 words).  This is a rather fun story about activism and bureaucracy and corruption, all wrapped in a warm cyberpunk blanket… The world is a vibrant and rather different New York, filled with solar collectors and data and big government but also a grittier side, an Undercity that Aedo fears to tread and a whole lot in between. And I love Aedo as a character, trying to do the right thing while continually finding herself in the right place at the right time to do something… a tense and rather thrilling ride at times, and I would be excited to see if there’s more to come from this world and these character. A great story!

This month editor John Joseph Adams offers us original fantasy by Maria Dahvana Headley and Jaymee Goh, and fantasy reprints by Tim Pratt and Christopher Barzak, plus original science fiction by An Owomoyela and Sean Williams, along with SF reprints by Alec Nevala-Lee and Charlie Jane Anders.

The September issue of Lightspeed also features an editorial from JJA, author spotlights, a review of Sense8, Season 1 by Sunil Patel, book reviews by Amal El-Mohtar, and an interview with Kameron Hurley by The Geek’s Guide to the Galaxy.

The cover artist this issue is Reiko Murakami. Here’s the complete contents for the September issue.

“See The Unseeable, Know The Unknowable” by Maria Dahvana Headley
There are woods, and the woods are dark, though there are lights hung from the trees. Many of the lights no longer light up. Around the edge of the clearing, someone has strung a long chain of origami animals on barbed wire, some gilded paper and some newsprint, some pages torn out of books, some photographs, each animal snagged on its own spike. The animals have been rained on, and more than once.

“The Wilderness Within” by Tim Pratt (originally appeared at Patreon.com, 2015)
I went to the window of my half-empty apartment that morning expecting to see the usual foggy San Francisco summer street, but instead, there was a volcano: looming over the city taller than the skyscrapers in the financial district, rising from the depths of Golden Gate Park, casting a long shadow to the west. The steep slopes, visible above the rooftops of my neighbors across the street, were gray and rocky.

“Crocodile Tears” by Jaymee Goh
Everything we crocodiles taste in the water has meaning. It tells us about the people who live here: who does the washing, who harvests the water crops, what they are growing in their fields and belukar. We even know littler details: who is pregnant, who is dying, what couple has been frolicking in the river, heedless of the risks we pose to them.

“What We Know About the Lost Families of —— House” by Christopher Barzak (from Interfictions: An Anthology of Interstitial Writing, 2007)
Of course the house is haunted. If a door is closed on the first floor, another on the second floor will squeal open out of contrariness. If wine is spilled on the living room carpet and scrubbed at furiously and quickly so that a stain does not set, another stain, possibly darker, will appear somewhere else in the house. A favorite room in which malevolence quietly happens is the bathroom.

“Power Couple (Or “Love Never Sleeps”)” by Charlie Jane Anders (from Interfictions: An Anthology of Interstitial Writing, 2006)
I never felt like a real college girl until I met John my senior year. He and I stayed up all night talking and then ran around campus chalking pastel hearts and portraits of Václav Havel on the cement walkways. A manic fox with wavy brown hair, he could come to rest suddenly and eye me with a playful stillness that made me ache. He managed to be both clever and smart, lean as well as dimpled.

“The Lives of Riley” by Sean Williams
The sirens are growing louder. Riley doesn’t know how the peacekeepers found out — he was so careful, so sure he’d covered every trace of his existence, all of it — but that’s less important now than getting away. He cannot afford to make any more mistakes. The night seems dark and empty as he leaves the warehouse through the back door.

“Ernesto” by Alec Nevala-Lee (from Analog Fiction and Fact, 2012)
A year after the war began, I found myself in Madrid, where I took a room at the Hotel Florida. In those lean months, breakfast usually consisted of little more than a few bits of dry bread from the night before, but one morning in the lobby, as I was nursing a cup of weak tea and some stale crusts, I noticed the smell of fresh coffee and fried ham drifting down from somewhere overhead.

“Unauthorized Access” by An Owomoyela
Prison 17 had been built long enough ago that it got next to no natural light — before all the studies that said that light was good for prison behavior and morale. And of course the rest of its district had been remodded in the past ten years, so the view from outside was a phalanx of solar panels over heat-reflecting paint, making a headache-inducing pattern of black and white. Prisons and hydroponics.

See our September Fantasy Magazine Rack here, and all of our recent Magazine coverage here.