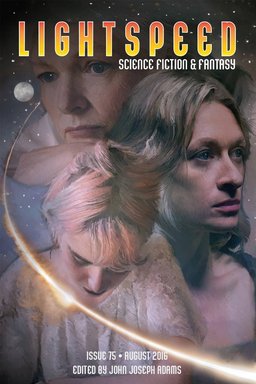 Best of all, there’s also a brand new SF tale by Black Gate author Jeremiah Tolbert (“Groob’s Stupid Grubs,” BG 15), which has hands-down the best title of the issue, and maybe the entire year: “Taste the Singularity at the Food Truck Circus.” Admit it, you want to read that story.

Here’s what my new favorite short fiction reviewer, Charles Payseur, had this to say about it at Quick Sip Reviews.

This is a story about food. Glorious, glorious food. It’s also a story about friendship and a bout passion and about dreams and about talent. The setting is subtle woven but vivid, an America dealing with rising sea levels and increased scarcity and refugees from the coasts. And the main character, Nico, is working as accountant but passionate about food, having to stifle that passion in the hopes of raising enough money to start out on his own out from under the thumb of a rather oppressive job. Food keeps calling him away, though, and when he bumps into an old friend who introduces him to the food underground…well, things get kinda weird… it is a fun story and one that kept me smiling throughout. So definitely check it out!

I had the opportunity to hang out with John Joseph Adams and Jeremy at George R.R. Martin’s Hugo Losers party at Worldcon, and that was a blast. Both of them are intimately plugged into the pulse of short fiction, and the industry in general, and it was great catching up. JJA also introduced me to Molly Tanzer (Vermilion) and Carrie Vaughn (the Kitty novels), and that was an honor and a pleasure. I took the picture below just before midnight, when the Alfie awards were announced. 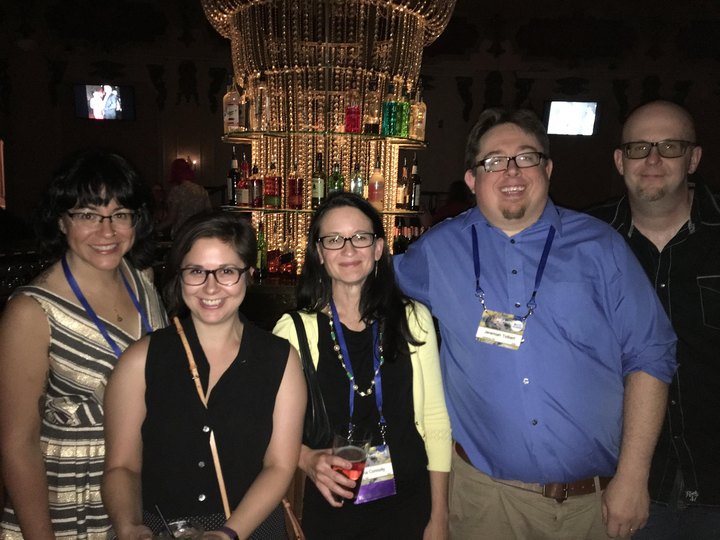 The August issue of Lightspeed also features an editorial from JJA, author spotlights, a review of Ghostbusters by Carrie Vaughn, Book Reviews by Sunil Patel, and an interview with Tim Powers. The ebook also includes a reprint of C. S. E. Cooney’s novella “The Bone Swans of Amandale,” from her World Fantasy Award-nominated collection Bone Swans. This month’s book excerpt is the introduction to The Big Book of Science Fiction, edited by Ann and Jeff VanderMeer, out this month from Vintage Books.

The cover artist this issue is Elizabeth Leggett. Here’s the complete contents for the August issue.

“Trip Trap” by Kevin J. Anderson and Sherrilyn Kenyon (from Dark Duets, 2014)
He huddled under the bridge and hid from the world outside, as he had done for as long as he could remember . . . No, he could remember a time before that, but he didn’t like those thoughts, and he buried them away whenever they appeared.The bridge was old and unimpressive, long ago marred by spray-painted graffiti, mostly faded now.

“The Assassin’s Secret” by Adam-Troy Castro
The world’s greatest assassin lives on a private island. That’s so much a given that you must have known it already. You’ve seen all those movies about master thieves, brilliant scammers, unflappable secret agents, dangerous people who live on their own tropical islands and must be lured into one last job. He was the source of the cliché.

“The Red Piano” by by Delia Sherman (from Poe: 19 New Tales of Suspense, Dark Fantasy and Horror, 2009)
Among my University colleagues, I have a reputation for calm. Whatever the emotional upheaval around me, I can be counted on to keep my head, to make plans, to calculate the cost and consequences, and then to act. If they also say that I live too much in my head, that I lack passion and, perhaps, compassion, that is the price I must pay for being one of those still waters that runs much deeper than it appears.

“The Siren Son” by by Tristina Wright
The day the dragons came, Neal kissed a boy. This span of months would later be remembered as the Awakening and condensed to precisely three pages in a tenth-cycle history text. Those three pages would lie nestled between twelve pages on the War of the Sea (when the merfolk rose up and attacked the trade ships in retaliation for an attack against their king) and twenty-four pages on the Reconstruction Age.

“Those Brighter Stars” by Mercurio D. Rivera
The call came through as I paced outside the Canberra Deep Space Communication Complex, puffing on an e-cig and watching my breath turn to vapor in the chill. “Hello?” The bald, skeletal image of a stranger stared back at me on my phone. “Ava,” he whispered. “Oh, Ava.” It took me a few seconds to regain my composure. “Dad?” I said.

“The War of Heroes” by Kameron Hurley (Originally published at Patreon.com)
The Heroes left the man dying on the field, one of the thousands they pitched overboard from their silvery ships at the end of each battle with Yousra’s people. Yousra brought him home and had him castrated, to ensure he spread no contagion, and put him to work in the village. The Heroes’ men tended to eat little and work hard, and with so few people left in the village, his labor was welcome.

“Taste the Singularity at the Food Truck Circus” by Jeremiah Tolbert
“There’s a stall in the new market where they cook just about anything on a stick.” These were the words, spoken by coworkers returning to the office from an early lunch, that drew me from my cubicle and onto the streets one late April afternoon. Everyone has their weaknesses, and mine has always been food.Anything? I thought. We’ll see about that.

“Laika Comes Back Safe” by Maureen F. McHugh (from Polyphony, 2002)

NOVELLA: “The Bone Swans of Amandale” by C.S.E. Cooney
EXCERPT: The Big Book of Science Fiction, by Ann and Jeff Vandermeer