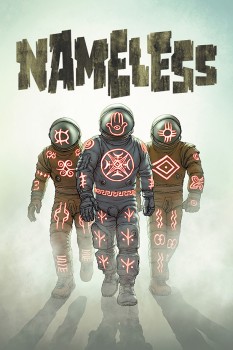 Grant Morrison is one of the most successful and famous comic creators. His comic writing career started in small press when he was just 18 years old, and graduated to Marvel UK and the world of 2000AD in the 1980s, with some work with Marvel and DC as well.

From the mid-1990s onward, he’s been consistently working on big projects for big publishers. My own first experience with him were the early 2000s New X-Men series from time to time, but then intensively through the Batman R.I.P. and Batman Reborn arcs.

I was very, very impressed with the creepy insanity he was able to channel in Batman and Robin while Dick Grayson was Batman. Serious creep factors.

But that wasn’t why I read Nameless, a recent series of his through Image.

I have a weird thing for space gods (as you saw in my Tin Foil Hats to Marvel’s Eternals post), dismissing them as conspiracy theorist nonsense, but seeing the dramatic story ideas in them concept. So when I saw the cover to Nameless #1, all I thought was “Grant Morrison is doing space gods!”

A lot of people think Morrison is a genius. Others can’t stand the ambiguity, obfuscation and convoluted logic in some his stories. I’m in the middle.

There are writers whom I can analyze and see what they’ve done with story or character and learn from them. There are some authors whom I can’t – they’re probably using art too honed for me to learn from yet.

Some of the works of Kelly Sue de Connick, Scott Snyder, Brian K. Vaughan and James Robinson hit me like that. So do the works of Grant Morrison.

Our hero, a down-on-his-luck occult expert, who is also nameless, is hired to help a Space X-type project go into space to step an asteroid from slamming into the Earth. The asteroid has been broadcasting psychic stuff, causing normal people to dismember their families in horrific ways.

However, they discover that the asteroid is a massive artifact, maybe temple, maybe prison, to a space god from a war that happened between dimensions during Noachian period of the solar system.

Or, that’s all a dream, and really nameless is an investigator or exorcist into a series of mass murders, which are related to the dream of an asteroid coming to Earth and carrying a space god.

In one of those two possibilities, they are captured by the space god’s prison and deconstructed for information. In another possibility (or a third), nameless is a thief who steals from people’s dreams, including a key that is of vital importance to the other two possible narratives.

It is very, very complex, and after I read the whole series twice, I read reviews. Many others were far more confused and impatient than I, and some were more laudatory of Morrison’s genius.

I absolutely loved it.

The spooky, psychedelic exorcist-in-dreams stuff was cool. The space god prison or temple was visually overwhelming, vast in scope and eeriness, and the haunted-house-in-space was superb. Chris Burnham and Nathan Fairbairn are an amazing art team.

Did I understand it all? Am I certain of what I read?

Not really. I think I got 60% of what’s to be gotten, but I’m missing the relationship between a few pieces (or a dozen) before I can fully get it. Do I think Morrison is a genius? Or do I think he’s a flawed creator who lacks necessary clarity in his work? I can’t tell either way. I hope he’s a genius.

I’m going to let this experience sit, but in a couple of months, I’ll read it again. I recommend you do too.