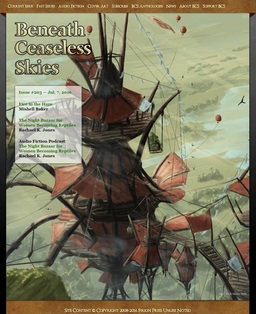 Beneath Ceaseless Skies was nominated for a World Fantasy Award earlier this month (alongside Black Gate, we humbly point out), and I must say, they make for some very stiff competition. BCS is one of the top markets for adventure fantasy, and it just started buying longer stories. At only $15.99 for a full year, it’s a terrific bargain. I finally bought a subscription back in May, and I’ve been heartily enjoying it.

“Fire in the Haze” by Mishell Baker
And yet everywhere I looked, my periphery supplied ghosts of him: lounging indolently on a couch, reaching up to add a final stroke to a poem, bowing over my hand. And there, of course, pausing at the foot of the narrow stairs to the grand bedchamber. Looking over his shoulder, a half smile adorning the human face he wore even when we were alone.

“The Night Bazaar for Women Becoming Reptiles” by Rachael K. Jones
Hester’s skin itched all over, and she longed for cool sand sliding against her bare belly. One, two, three eggs into her mouth, one sharp bite, and the clear, viscous glair ran down her throat. The shells were tougher than she expected. They tasted tart, like spoiled goat’s milk. She waited for the change, but the sun crawled higher and nothing happened.

“The Night Bazaar for Women Becoming Reptiles” by Rachael K. Jones (Duration: 36:25 — 33.34MB)
One, two, three eggs into her mouth, one sharp bite, and the clear, viscous glair ran down her throat.

“The Moon Over Red Trees” by Aliette de Bodard
…where she might well always be the jumped-up little Annamite to other Frenchmen—but what does it matter, if she has Raoul’s love?

This month’s cover, “High Above the Savannah,” is by By Martin Ende. We last covered Beneath Ceaseless Skies with issue #200.